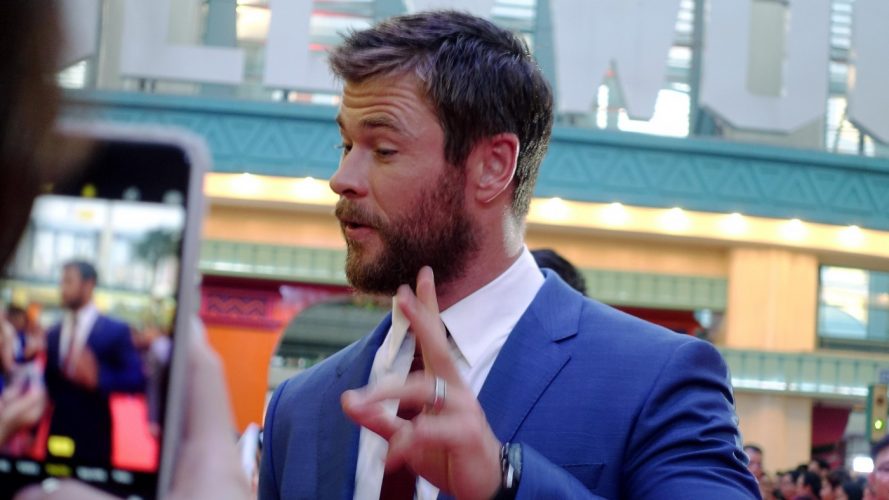 T’was a warm, humid sunny afternoon when Geek Culture made its way down to Universal Studios Singapore, for the Asian premiere of The Huntsman: Winter’s War, courtesy of the first class invite from Resorts World at Sentosa.

Who would say no to meeting the almighty Chris Hemsworth, Oscar winner Charlize Theron, Golden Globe winner Jessica Chastain, as well as first time film director Cedric Nicolas-Troyan? The 3 hour wait might’ve been long, but at least I wasn’t alone in my pursuit of the stars.

The main street of Universal Studios Singapore was transformed for one afternoon to host the glamorous event. Fans from all over Singapore, and even some from around the region, braved the sweltering heat, just for the chance to meet the cast.

They made signs, presented dramatic sighs and kept their cheer and jovial atmosphere throughout the wait, all the while occasionally talking to the fan next door, to share the love.

The host for the evening was radio DJ Jaime Yeo. Gamely traversing the length of the red carpet repeatedly, she engaged the crowd with little movie teasers and giveaways. Fans who paid careful attention to what she was saying won goodies such as The Huntsman t-shirts, and passes to the premier screening itself!

Some truly hardcore fans started queuing as early as 8.30am (the guests only arrived at about 6.45pm), and the more creative ones had personalized signs for each of the guest.

Could it be? Is it them? Jaime, quit playing games with our hearts! Alas it was not so.

Director Cedric Nicolas-Troyan was the first to arrive, and he greeted fans with a warm smile and wave as the hoards of girls (and some guys) screamed his name. Taking his time to talk to fans and sign items, Nicolas-Troyan had a big grin splashed across his face as he posed for selfies and signed posters.

Next to arrive on the scene was Jessica Chastain. The slender actress was welcomed with cheers and screeches as fans desperately fought for her attention. The starlet was careful to make sure that she got to say hi and snap selfies with as many fans as possible, while being swept up in a whirlwind of bodyguards and paparazzi.

If the organisers thought for a moment that Chastain was enough to distract the fans so that Chris Hemsworth would have a chance to sneak on the red carpet, they were so, so wrong. Shrill and shrieks resounded across the main street as soon as the door to his car opened. Quickly making his way to the fans, Hemsworth started sign posters and merchandise as soon as he saw them.

Acting like the couple that they are in the film, Chastain and Hemsworth split the work, each working seperate sides of the red carpet and switching it up occasionally, so that most of the fans got to see them up close and personal.

Chastain seemed genuinely happy to meet fans and would take the time to share a smile with them.

“Oh, ho but did you know that Charlize Theron is really the Imperator?”, says Hemsworth in an attempt to divert the topic and maintain his secret identity.

Actually, we’re not sure what both stars were reacting to, but we’d like to think that’s what the exchanges would’ve been like.

Poor Hemsworth was sweating buckets as he furiously, yet congenially, interacted with fans.

All too quickly he was whisked away deeper into the river of fans that awaited.

However fans were soon graced by the presence of the Queen herself, Charlize Theron. Regally striding down the red carpet, Theron unfortunately had less time to greet fans and take photos (This was due to unforeseen delays. Apparently, Hemsworth and Chastain arrived in Singapore together but Theron was in a different flight).

However a lucky few still managed to squeeze photos out of her along the way.

Hemsworth, Theron, Chastain and Nicolas-Troyan ended the red carpet segment with light banter on the stage just before the movie’s premiere.

They shared teasing looks and behind-the-scenes tidbits. Theron even revealed that playing the Evil Queen wasn’t as hard as people thought. Emily Blunt (who plays the Ice Queen) and her were surprised at how easy it was to be “evil”.  After a few heartfelt words and thanks to the fans who made to the event, the stars quickly exited stage left and the movie began.

And just like that, they were gone. Oh Mirror Mirror, where are the three fairest stars of them all?

You can read our movie review here.