That “Breathtaking!” Keanu reveal for Cyberpunk 2077 at the Xbox press conference was arguably the highlight of this year’s otherwise dull E3. And accompanying the revered movie and internet star is the blare of grungy, synth-rock music pumping as fans in both the Microsoft theatre and across the web cheered him on as he came on stage.

And guess what? That same song is now on Spotify.

The song, Chippin’ In by SAMURAI (actually a moniker used for the Swedish punk band Refused), is CD Projekt Red’s officially-licensed song for Cyberpunk 2077.

Actually, while Refused takes credit for the amazing music, the band Samurai is the actual gang/rock band in the game, which Reeves’ Johnny Silverhand is the frontman of.

We also know that Johnny Silverhand and Samurai will feature prominently in the game, as the playable protagonist V is also part of the gang, with Silverhand acting as his holographic NPC companion.

Interestingly, CDPR announced that they will be working closely with Refused to produce a “greatest hits” album for Samurai in the game, so this definitely won’t be the last time we’ll be hearing more adrenaline-pumping tracks from Refused. Whether or not we’ll see a Keanu Reeves/Johnny Silverhand band cutscene remains to be sen, but definitely keep on the lookout for it when the game comes out, if anything.

In the meantime, why not rock out to Chippin’ In in anticipation of Cyberpunk 2077‘s April 16, 2020 release? Or delve into Night City in the tabletop RPG prequel while blasting the tune in the background? 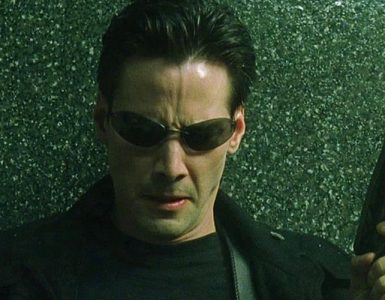 ‘Matrix 4’ Gets Official Title And First Trailer At CinemaCon

Whoa, some lucky fans at CinemaCon managed to get their first look at Matrix Resurrections.