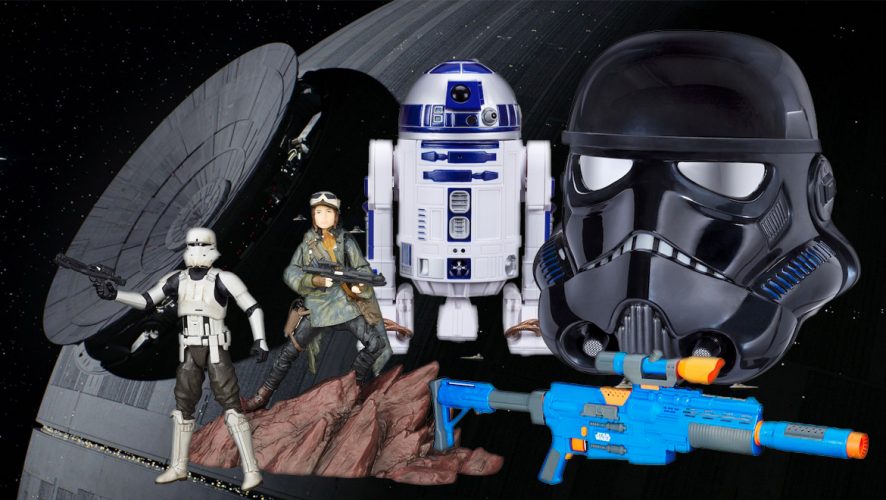 Here we go, time to get ready for non-stop Star Wars all the way until December!

Star Wars shopping season is a week away and we’ve compiled all Hasbro Star Wars toy offerings you can grab. To kick things off here’s a first look at the Hasbro retailer exclusives in the US.

Which makes us wonder which ones will we get in this part of the world, especially that Shadow Trooper Helmet. Check out the Black Series Stormtrooper Helmet that’s coming too.

Wait-a-sec, didn’t we already have a Storm Trooper Helmet on the way? Taking a leaf out of Street Fighter and Mortal Kombat, a quick palette swap means another SKU for sale! This helmet will feature the same voice changing feature for you to intimidate the Rebel Alliance with mirrored lenses and in Shadow Trooper colours. Available exclusively at Amazon. Suggested Retail Price: US$79.99.

From the description it looks like this R2-D2 works like a Furby but in a droid form. Clearly, the Chewbecca Furby from last year didn’t seem to work out. This programmable R2 can be controlled directly from a downloadable app and responds to your voice and Darth Vader! Vader?? Might be a feature that will allow you to place this Smart R2-D2 next to the TV as a companion toy while watching the movies. Available exclusively at Walmart. Retail Price: US$99.99.

Felicity Jones looks pretty badass in the trailer. This toy, however, is a far cry from that. Sorry, nope. And poor K-Mart gets this.  Suggested Retail Price: US$24.99.

At first glance, the blaster actually looks pretty decent. With a paint job it would probably look even better! Featuring a detachable scope, stock, and barrel for all your customisation needs, it’s not new but Nerf needs to get in on the action. Available exclusively at Target. Suggested Retail Price: US$79.99 (that’s some crazy Disney tax right here)

The latest variant of troopers from the Empire will be these dudes with a new Helmet design, everything else looks pretty much the same to me. Will the market ever tire of endless variants? We’re guessing that will never be the case as long as there’s a new movie to create even more characters for merch! Available exclusively at Toys “R” Us. Suggested Retail Price: US$19.99.

Finally, here’s a quick snapshot of all the toys that you can get that are non-retailer exclusive –

In case, you’d really need a way to balance the budget and ensure that you’re optimizing your spend, perhaps this handy checklist by Yakface.com might be of some help – DOWNLOAD (PDF)

As far as retailers go, it seems that the wallet might still escape alive. However, this is but just a taste of what is to come as we head into the year end Star Wars holiday season. When it comes to Singapore, we’re probably gonna get all these items but in smaller quantities.

We have a bad feeling about this.