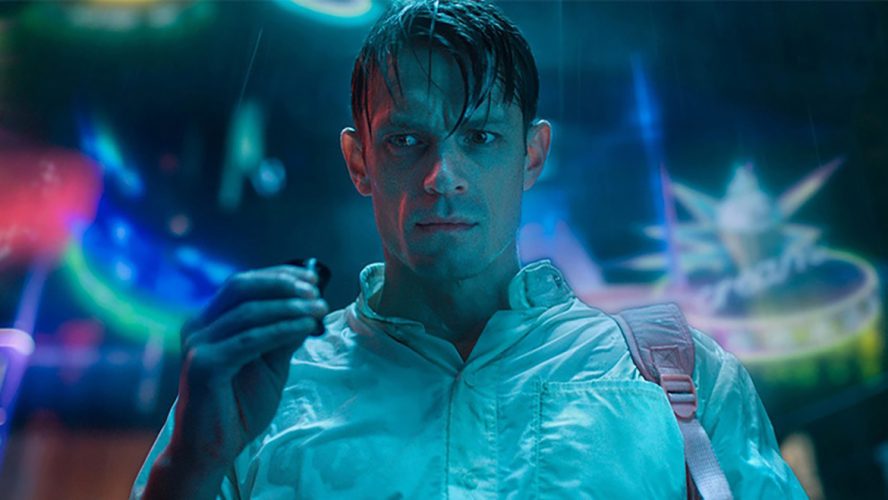 Netflix’s Altered Carbon is the Next Blade Runner, Except It’s Not

The sci-fi genre is a well-worn one, a niche craft that boasts more unsuccessful works than genuine masterpieces. (Anyone remembers Flash Gordon sans Queen?) Exploring the possibilities of an unforeseen future paves the way for many different interpretations, and some hardly translate well to the reel life.

If they do, therein lies another consideration: with several well-established titles that have already cemented their positions as mainstays of the industry, how are newcomers going to make themselves stand out? After all, the world of sci-fi is not only limited to the likes of AI and extraterrestrial beings.

Altered Carbon, Netflix’s hotly-anticipated 10-episode original, looks to change up the field by demonstrating just how far one can tap into the fantastical realm of sci-fi.

Based off Richard K Morgan’s 2002 award-winning novel of the same name, the big boy weaves together an interesting narrative with plenty of other elements to deliver a promising novel experience for fans of the genre.

The cast and crew were in Seoul, Korea, to talk about the new series, and Geek Culture was present to find out more about the bringing life to the iconic novel.

A Melting Pot of Different Genres

An interesting note about the cyberpunk-themed show is its approach to a weary genre – and a glimpse of the synopsis does tell of an intriguing premise. In a futuristic world where death is not inevitable, a man awakes in a new body, or “sleeve”, 250 years after being killed, to a forced request of solving a murder.

The catch? It’s not just a normal murder, but one that involves a supposedly immortal man, who is, incidentally, still alive. Don’t worry. It actually makes sense. The rich keep back-up memories, in case something happens to the current one and in this case, the latest sleeve realises that he doesn’t have memories of the last 48 hours, which leads him to believe that the prior sleeve was killed.

The journey gets tougher, and protagonist Takeshi Kovacs (Joel Kinnaman, RoboCop, Suicide Squad), who has been hired to find the killer, finds himself tangled in a labyrinth of connected backstories and shocking discoveries, with more questions than answers hanging in the air.

It’s a slightly more unusual concept, considering how noire, murder, and sci-fi don’t often go hand-in-hand. But the much watered-down version of events also leaves out other equally significant themes, such as war, and love.

She goes on to elaborate that the unique mesh of ideas was done solely for the fun factor. “It was a creative challenge to try something enjoyable,” she explains, “and the ambition of this project was great, the collaborators amazing, and that gave us a reason to do something different, something that wasn’t done before.”

Essentially, Altered Carbon is a rich buffet spread of Blade Runner-esque elements, with the additional concoction of a Westworld noire murder mystery and action.

Back when the book was first released in 2002, Kalogiris originally optioned his novel with the intent of making a feature film. But Ready Player One the book is not, and with the sheer amount of violent bloodshed and explicit nudity present, it was a tough sell for studios then.

16 years down the road, the show is finally set to the small screen but while some concepts have taken off, and others evolved over time, one remained the same – the desire to include feature-film level action.

Speaking to the same press, actress Martha Higareda (Borderland, Street Kings), who plays Lieutenant Kristin Ortega – a smart and tough cop with an almost unhealthy interest in Kovacs – shared how each of the cast members had to learn the same fighting style that corresponds with their characters. In her case, she took up the more aggressive forms, such as boxing, to reflect her on-screen persona Ortega’s street-smart, bossy personality.

Fellow actress Dichen Lachman (Aquamarine, Agents of S.H.I.E.L.D), who plays Kovacs’ older sister Reileen Kawahara, builds upon that, adding, “I just feel so blessed to have this experience where I really got into the body of the character, because a lot of times in television, it’s just talking heads…but for this show, you’ll have to be in your body, you have to be in your body 100%.”

As seen from the trailer, the show promises plenty of brutal, thrilling fight scenes for viewers to get their adrenaline fix. With the effort put into producing realistic and high-quality action sequences, they are at least covered on that front.

It goes without saying, but without the flames of passion burning strong in the hearts of everyone from the team, Altered Carbon would’ve just remained a grandiose dream. Fortunately, the fielded team was strong.

“You take a risk when you cast, you don’t know how well they work with each other, you have no idea if they’re going to mesh or not,” noted Kalogiris.

“One thing that happened to us is that we are incredibly lucky that the people who inhabit these parts weren’t only able to cohere together so quickly, but to train together, to rehearse together… to become your family on the ground.”

In fact, passion was the buzzword during the event. With great chemistry, the four personalities ribbed fun at one another, vouched for the other party’s acting performance, and recounted instances where dedication levels were at an all-time high. 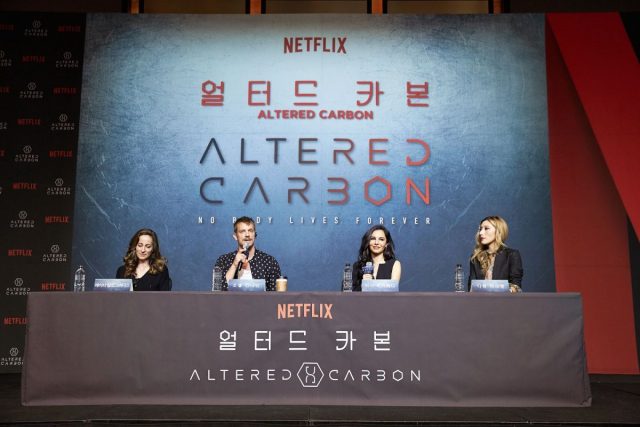 Higareda puts forward the example of Kinnaman, whose commitment to the filming ran so strong that he continued training in the gym even with a broken leg. Then there’s the very intense preparation before shooting, where everyone went through physically-draining training segments one after the other. Oh, and how about sacrificing lunch hours to dish out some practice moves?

The passion goes beyond the four of them, which makes Altered Carbon a “special project”, as per Kinnaman’s words. “We’ve all done a lot of work before this, but I can’t remember many projects that I’ve been where everyone is so passionate…when you feel the passion is not just from the actors or the producers, but the whole crew, you know you’re in a project that’s truly special.”

And finally, after months of blood, sweat, and tears, it seems their hard work has paid off.

When a work is based off existing material, one cannot help but to make comparisons between the original source, and the subsequent adaptations. It’s a craft that’s difficult to master, especially since the latter is often given flak by the audience. Fortunately, Kalogiris’ version steers off that perilous path.

Building upon the impressions established in the original novel, she manages to flesh out the characters fully, while giving the side roles more backstory and individuality that were absent from canon. The process is made easier due to her friendship with Morgan, and the duo often exchange and discuss about various issues.

For example, Ortega in the TV series has a comparatively complex past, giving a deeper insight into her actual intentions and inner psyche. Alternatively, the showrunner also switches up both imagination and book lore to come up with a different story spawned off the same basis.

Kinnaman further elaborates, “I read the book, and I sort of had one vision of Kovacs, while Laeta saw the character differently. And then when I understood her vision of it, and we sort of meet halfway, it created something that I think neither of us had imagined. We joined forces and created something new.”

Sometimes, a mashup between the two medium is just what is needed. Best of both worlds, am I right?

And in case you’re wondering, the first season of the show covers the entire novel and does not break up the book to fill some half-baked notion of saving some bits for the next season.

So wait, will there be a season 2? You’ll just have to watch it to find out.

Takeshi Kovacs may be hella strong of a fighter, but his female counterparts are no slouches, either. Apart from Ortega, Reileen, who adopts a comparatively elegant fighting stance – though no less deadly – and the all-powerful revolutionary leader Quellcrist Falconer, amongst others.

It’s not just physical strength at play here; most of the female characters in Altered Carbon possess strong willpower and mental endurance as well, caused by the ghosts of unfortunate pasts, dark secrets, and moral struggles.

The press conference ended fittingly well with a Korean tradition, where all four team members each dipped their hands into a container to draw a random item with significance to the Korean culture, much like a mix between fortune-telling, and a lucky draw attempt.

Of course, everyone’s lucky in the name of publicity, and after the objects have been drawn, Altered Carbon has been blessed with good reviews and a long-lasting media life.

Come February 2, 2018, and fans will be able to determine for themselves if the sci-fi juggernaut is Netflix’s next big breakthrough, or a mere overhyped show concept.

Or you could stay tuned and refer to our upcoming show review for an inkling of sorts! 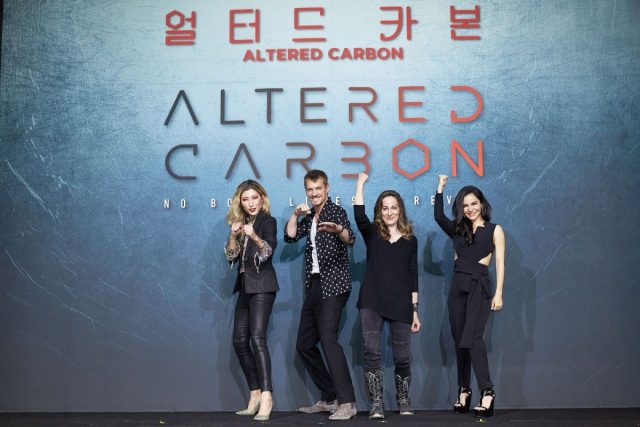