Michael Bay Admits He Made Too Many Transformers Movies

Michael Bay, the director who made big-budget action films filled with countless explosions into a signature of sorts for himself, is best known for his work on the five Transformers movies, which were released between 2007 and 2017, with the last film being Transformers: The Last Knight.

The first Transformers movie was a leap forward in terms of its scope and quality of visual effects. It was the quintessential action popcorn flick. As Bay said in an interview with Unilad, “The first one was scary. It was technology we didn’t know would work, and then it became very successful. It was the first time digital effects were that highly reflective, so it broke a lot of new ground.”

The sequels, however, were inconsistent in terms of narrative quality, even if the visuals remain phenomenal. Still, the movies were major box office successes, as the five movies grossed over US$4.5 billion in total.

However, Bay admits that despite the commercial success of the movies, five were too many.

“I made too many of them. Steven Spielberg said, ‘Just stop at three’. And I said I’d stop. The studio begged me to do a fourth, and then that made a billion too. And then I said I’m gonna stop here. And they begged me again. I should have stopped. They were fun to do.”

Following the last Transformers movie, Michael Bay continued expanding his oeuvre with 6 Underground in 2019, a Netflix Original film, and Ambulance, released in March 2022. Looks like Bayhem shows no sign of slowing down anytime soon. 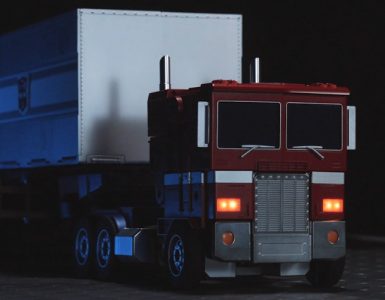 Hasbro & Robosen Return With Auto-Converting Optimus Prime With Trailer, But Each Transformers Sold Separately At US$750

Merchandise, transform and roll out!