Back in November 2019, fabled creator Hideo Kojima unleashed the vision that was Death Stranding onto the world. The critical reception to the interesting concepts put forward by a game about essentially being a post-apocalyptic courier naturally led to discussions about expanding the universe. While the studio has been keeping quiet, things are about to blow up. At Summer Game Fest 2021, Kojima unveiled Death Stranding: Director’s Cut and it will be coming soon.

An upgrade for the original game for the PlayStation 5, Kojima Productions will share more about the game in the coming weeks. However, in typical Kojima fashion, we got a lengthy teaser of the “enhanced and expanded adventure” in Death Stranding: Director’s Cut.

In the teaser, we see hero Sam Bridges in an underground base of sorts. There are futuristic Predator-looking enemies patrolling about as well.

Yet, Sam’s focus is on figuring out how to use a cardboard box. The nod to the Metal Gear Solid franchise is clear, and fans would definitely lap it up. Is this the crossover we have been hoping for? Of course not, Konami still has the tactical espionage action franchise locked up. It is still fun, though, to see the cardboard action in the Death Stranding: Director’s Cut teaser.

We can likely expect Death Stranding: Director’s Cut to surprise us in unexpected ways. Hideo Kojima has never been one to shy away from eclectic and creative pursuits, and we will find out more in the next few weeks as E3 2021 rumbles on. 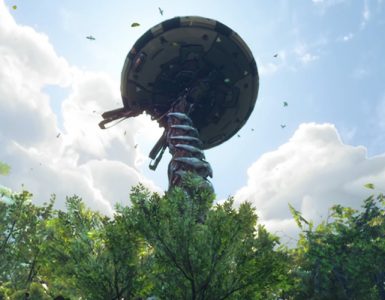