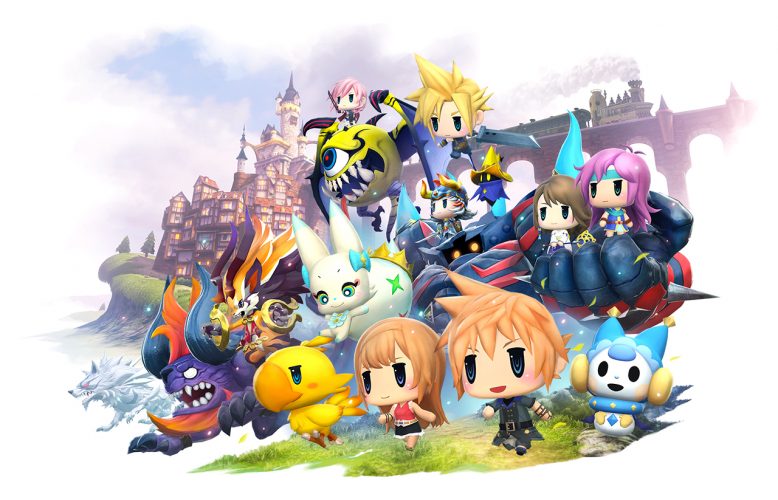 Don’t let the chibi art style and the non-Roman numbered title fool you – World of Final Fantasy is full fledged classic JPRG mixed with a dash of Pokemon (more on that later) to give you a level of charm like no Final Fantasy ever.

It even starts out in classic JPRG manner – you play as amnesiac twins, Lann and Reynn, who get sucked up (or back!) into the world of Grimoire to reclaim their titles as monsters (or Mirages here) masters. Their zesty personalities and pun-filled banter anchor the simple story of them wanting to how they lost their memories and their desire to reunite with their family.

Nostalgia is front and centre here – it’s hard to fault Square Enix from making a game that appeals to fans and non-fans alike. From familiar faces like Cloud or Squall showing up to help you turn the tide of battle, to iconic fuzzy critters like chocobo or cactuar being a part of your arsenal, you will feel all swept up in nerdy nostalgia as they make their adorable appearance.

The Pokemon-ness kicks in fairly early on, as you are encouraged to “imprism” Mirages they meet along the way, by meeting certain battle requirements. It can sometimes be simply reducing its HP, inflicting a specific status ailment, or even healing the Mirages. Once you do so, you can bring it along with you in battle, and they literally form up the building blocks of battles.

Each Mirage is categorised by their sizes (S, M, or L) and you basically stack them like a 3-level pyramid, with the group merging their stats and abilities (including strengths and elemental weaknesses). Experimenting with different stacks can lead to great hybrid abilities or completely new ones altogether. Alternatively, you can decide to un-stack them for more turns, but at a cost of losing the shared powers and abilities. And because of Lann and Reynn’s ability to grow (L) or shrink (M) at will, you essentially have 4 stacks of totem pole to customise with.

I applaud Square Enix for taking a basic stacking concept and adding layers, depth and strategy, but I find myself mostly stacking the strongest Mirages and then spamming attack in battle. This works mostly until I get to a boss battle in which I simply make minor adjustments. While this alone is not a deal-breaker, it can be severely detrimental when only a small percentage of experience from battles is shared with the 6 other Mirages you carry with you. This results in a fair bit of grinding, which is unwelcome in such a cutesy package.

And in an almost 50-hour campaign, it can be a little off-putting. While I can see it as a boon for those with a PS Vita (World of Final Fantasy has cross-save functionality), for many folks, including myself without the portable, I can’t help but feel like we are losing out.

For a game that has the word “world” in its title, I perhaps expected a little more. Towns and dungeons are little more than just narrow alleyways and tight corridors to take our heroes to the next local, which is a shame, considering how beautiful the world and colourful the world is. Exploration is also kept minimum, but I guess these are deliberate design decision to not overwhelm casual players.

Thankfully, we also get a enough mini-games and side quests to detract you from the main-game and power up your “Champions” – the equivalent of Final Fantasy hero summons. While they are completely optional, the main draw for me was seeing their own stories play out, independent of the twins. As a sucker of anything Final Fantasy, I’m always delighted to see these familiar faces, including your traditional summons like Ifrit and Shiva, pop-up in chibi-form.

I also do have to say, being able to fast-forward through the story and battles was one that I did not expect to like, but it was one that I found myself using most often. As charming as the the world, its characters and their dialogue are, they tend to play out a little slow, which can bog down the momentum.

There was also the baffling decision to map “jump” into one of the face buttons, when it serves no purpose, because there is zero platforming. It’s like they simplified the controls so much, and they realised they had an unused button. I did however, like the inclusion of puzzles that require you to use a certain stack combination in order to proceed, but it was just the right amount of puzzle solving that smartly uses its unique stacking mechanic.

World of Final Fantasy is unabashedly dripping with nostalgia and fan service. It tows the line of being simple enough for newcomers to pick-up and run with it, while having enough depth for old-school JRPG fans to chew on. The adventure is mostly enjoyable, albeit too repetitive after about 20 hours in, but it is one that filled with cute nods to the series, while crafting a new type of narrative with beloved characters.

World of Final Fantasy is a delight for new players and long-time fans alike. It tugs at your nostalgia heart strings with an endearing presentation of familiar faces, baked together with a simple yet solid story, and a unique, albeit repetitive battle mechanic, that bogs down the enjoyable adventure half-way through the campaign.

To either help it look better, play better, or both.

A glimpse into the future of gaming.