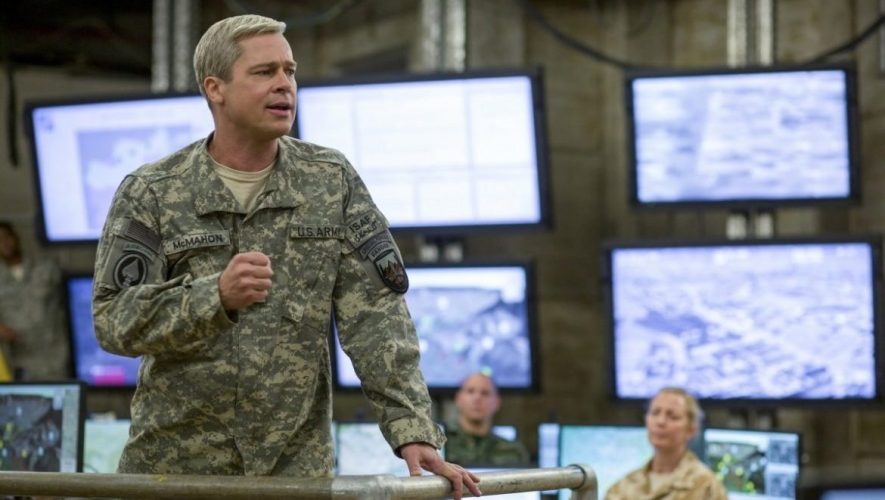 But it is destructive in the sense that War Machine gives audiences an opportunity to look into how the top brass in the US military conduct their operations on the international arena. And. It. Is. Ugly. And disgusting.

Unlike traditional war movies, there’s a dearth of combat sequences within War Machine, with a heavy focus on dialogue. Audiences follow the exploits of General Glen McMahon (Brad Pitt) and his crew of hand picked staffers, to form the latest brain trust attempting to tackle the war in Afghanistan.

As the new commander of all U.S. and NATO forces, Pitt has to ensure that allies are working together, while educating the Afghan citizens to accept democracy, and also juggling with US politicians who want to get America out of the war as quickly as possible.

Lesser men would have wilted at the challenge, but building on his past successes from his exploits in Iraq, McMahon and crew relish the new opportunity. However, they soon realize why the seat at the top is nothing but a revolving door for generals to get chewed up and spit out on.

Instead of the triumph of the human spirit and seeing heroes forged while overcoming insurmountable odds, War Machine rejects any fairy tale ending or tales of valour. Instead, the devastation is depicted by the slow downward spiral of a man’s career, while armed with the belief that democracy is the way to salvation for the Afghan citizens. The fallacy here is that the joint forces are armed to the teeth, so it feels more like pushing the nation to accept a political ideal at gunpoint.

But being a military man, it’s not as if McMahon can quit the appointment and seek an alternative course of action. While we would like to feel sorry for him, it’s his own hubris in completing the task that will ultimately cause his downfall.

Throughout the entire movie, audiences see how even the individuals in power can’t get what they want, especially if no one wants to be helped. We witness this from the soldiers on the ground, to the Afghan citizens they are trying their best to protect. McMahon tries his best to help communicate his ideals and values to everyone outside of his trusted circle, but fails repeatedly in his attempts. 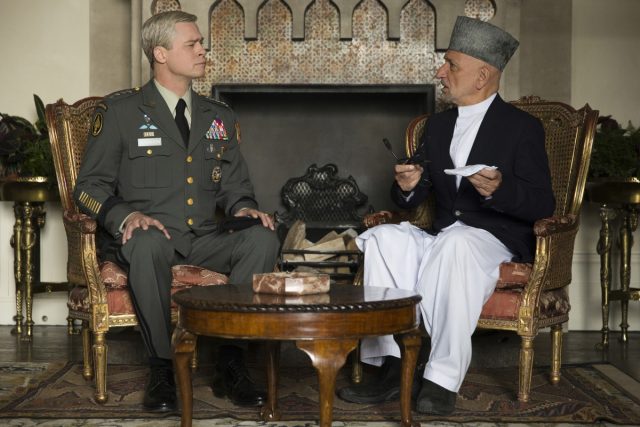 You might think that there must be a silver lining to it all, but War Machine does not even spare a moment to give Pitt’s character a small moment of reprieve. As the show progresses, we eventually witness how he eventually has to grasp at straws, to explain the military’s purpose to the citizens of Afghanistan. This is even after they’ve provided him with the best possible way to end the conflict – leave them and let the country be.

It seems that such a depressing scenario can only be a scatching critique at the American attempts to ‘share’ their love for democracy through the use of military might. And we witness Pitt’s character being dealt the finishing blow by Rolling Stone magazine (good reading after you’re done watching the movie). Yes, the same Rolling Stone that’s more renowned for their coverage of the music scene. After all, this movie is based on the book, The Operators: The Wild & Terrifying Inside Story of America’s War in Afghanistan, written by the late Rolling Stone journalist Michael Hastings. He first wrote about General Stanley McChrystal in as “The Runaway General” in the 2010 article.

Carrying the entire show is the performance of Pitt alone. The odd thing is that it sort of works as we witness his fall from grace. Those used to seeing Pitt play the hero in most of the movies might find it surreal to see him fall. In fact, his role is so great that it is unfortunate that we hardly see his supporting cast being fully developed, apart from the occasional cheerleading for their boss. But watch out for Ben Kingsley in his excellent turn as Harmid Karzai, in an otherwise short but impactful role.

War Machine represents a significant milestone for Netflix, as it touches upon a subject that is worth reviewing, but will not necessarily bring in the box office numbers. While Hollywood is busy chasing sequels and superheroes, Netflix is beefing up its content with quality. This movie makes you wonder if the wars that America has been fighting will ever see a peaceful resolution of any type..

The end is unsatisfying but then again, that’s just life.

The only fairy tale ending to war exists only in Hollywood. War Machine shows the harsh reality, especially for the leaders at the top.