It’s been three years since esteemed fantasy RPG author Monte Cook decided he’d like to kickstart a PC version of his Numenera campaign setting. One of the most successful Kickstarters ever, it saw dozens of stretch goals hit, an extended development which saw some things cut, and technology keep pressing on. Was it worth the wait?

We can tell you, definitively, the answer is yes.

(Disclaimer: We reviewed a review copy on PC, which should be the final version barring some day-one patching kinks which may address some of our issues below)

This is your story

You’re the Last Castoff, the latest piece of vessel from the game’s most infamous god, the Changing God. As the prior vessel to an ascended divine being whose idea of immortality is to body-swap, you’re given life when he abandons the body. Things go quickly south, however, when you’re brought up to speed with the Bad Thing that is hunting you, daddy Changing, and every other Castoff which has come before. You’re told you need to make yourself whole, somehow, and then left to go do so.

Torment: Tides of Numenera, is marketed as the spiritual successor of Planescape Torment. It’s easy to see the similarities, with both RPGs focusing very heavily on the storytelling aspect of RPGs over the loot-and-plunder aspects. The storytelling premise takes precedence over fighting, and the game spends much more time letting you slowly explore, talk, and piece together trails.

Torment’s claims that it has over a million words crammed in are thus not for show; expect to spend a lot of time reading, pondering, reading some more, making a choice, reading even more, maybe make a few more choices, and then finally conclude. And that’s just one conversation. At the start of the damn game.

For instance, I spent almost an hour and a half walking back and forth in the market square, talking, moving back and forth, examining, and talking some more. And this was, essentially, the starting zone. When you think you’ve eventually started exhausting narrative content across several maps, Torment’s plotlines almost seem to take delight in bringing you back to characters to discover new conversation trees and threads to untangle. And this is a good thing. Torment actively rewards its players who continue to poke and prod at the words of others. What does this creature mean when it asked for a sample? Do I have something I can show? Why is this other character asking me questions I have no idea of knowing? Did I miss someone else sharing information?

In my first, all day sit down with the game, I estimate about five to six hours of it was spent in just a total of about four zones alone, barely tickling the surface of the main quest and completing side quests where I could. And in my dozens of hours, developers inXile Entertainment ensured that even if I failed, I would prefer not to just reload a save file. More on that in just a bit.

Be all you can be

The underlying Unity engine is there for you to wander around with whenever you’re not busy talking. It’s serviceable, with background graphics enjoyably throwing us back into those pre-rendered, lovingly drawn RPG’s of the early 2000’s. The Numenera universe – of which you’ve been thrown into its Ninth World – manages to capture the majority of the pen-and-paper’s nuances. Players can choose to be one of three classes – the warrior Glaive, the Jack of all things, or a Nano, the masters of technology. The world is a far-future Earth, ravaged by wars, time and mysteries. Humanity had previously unlocked time and space travel, but has now regressed to a medieval technology level. Scattered across the world are strange, alien items called cyphers (one-use, unique, items which carry a powerful effect and negative statuses if you hoard too many) and more powerful artifacts. Humanity… er, what’s left of it, scrabbles to study and utilize these strange items and try their best to survive.

Each class is better in one of three “statistic pools” – Strength, Speed and Intellect. In my playthrough, I chose a Nano, skilled in the tongue and with a high amount of Intellect. Halfway through talking to someone, the Persuasion skill option appears, an attempt for me to part them with info. Selecting it has the game pause to ask how much “Effort” I’d like to expand, using points from the Intellect pool. Use more, and your chance of success increases, but you’ll also be reducing the total number of resources you have to do other Intellect-related tasks or combat spells till the next time you rest.

I talked about how Torment has specifically coded itself for failure. Here’s why this is great. In an early part of the game, you can examine a rock pile and hopefully dig out some coins. You can also try to separate more coins from the debris by smashing the rocks. I did the old save-and-reload trick to see what would happen for both effects. Success, and I gained more coins. Failure, however, led to an interesting dialogue moment and a new cypher item. Which was the more valuable? It’s hard to say. But this neatly encapsulates the game’s expectation that even when you make a skill check and fail, it’s not the end of the world. Even death is impermanent, thrusting players back into the internal mind of the Last Castoff to explore, talk, and search for more truths about yourself.

Even the most peaceful experience Crises

While a fair amount, ok, the vast amount, of time is spent sitting in front of non-player characters, reading what they have to say (or not say), conflict will eventually break out. Dubbed “Crises”, they are far different from just breaking out swords and spells and firing away. So far, there have been at least two, three, or even more ways to approach the turn-based Crises I’ve initiated– with intractable equipment, the ability to try to calm enemies down (if they bother to listen, of course), and optional side-objectives to consider making a play for. You can try to sneak your way past deranged drones to de-activate their control panels (of course, there’s a skill check in there). You can position allies to flank or otherwise debilitate foes (called “Fettles”). You can, of course, swing a sword at it. 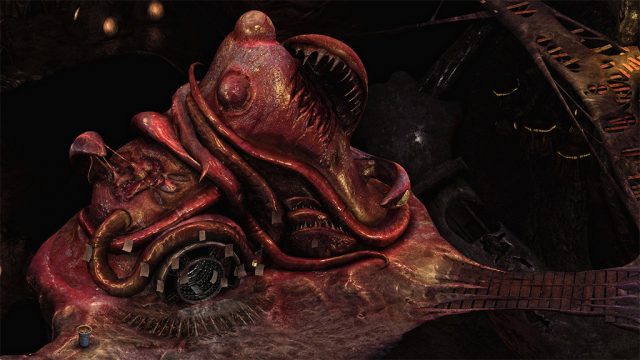 Beyond the big picture of each crisis, individual recruitable companions add further wrinkles with their own special abilities and considerations. Callistege, one of the first companions you meet, is a multi-dimensional Nano. Stuck with an infinite number of versions of herself, she can warp space to teleport away from foes, go into hiding and then blast foes with a pile of radiant energy. Alligern, the other first companion, has writhing, living tattoos on his body which generate special effects based on repeated actions. There are about a half dozen companions – each with their own motivations, and personal questlines which can tack on dozens more hours (and yes, additional reading.)

READ ALSO:  The PS5 DualSense Wireless Controller Will Set You Back US$79.99

It’s when combat really gets going, though, that you also see some of the issues with Torment. With so much of the game preferring that you talk and read and listen, combat feels incomplete. Take those drones I talked about – to get to the control panels, I had to open doors and either fight or sneak past guards. Except the doors – which sank into the ground when activated – mysteriously blocked some skills and abilities. I couldn’t have Callistege teleport past the open door, for instance. It’s also in combat where you wonder why you can’t easily place characters during their movement phase, or have the foreground fade away to better place allies and see where everyone is in tight confines.

Weapons and spells cover a wide range of damage types – such as raw physical force, electricity, corrosive chemicals and more. Unfortunately, you don’t ever really know what each does. Players are left to experiment and wonder if their choice of damage has any noticeable effect. While some might be obvious (drones take more damage from electricity, vaguely humanoid-ish things probably don’t like acid so much, and the transdimensional beings really don’t like energy damage) it would have been worlds better if we had a damn in-game glossary telling me what they mean and do. 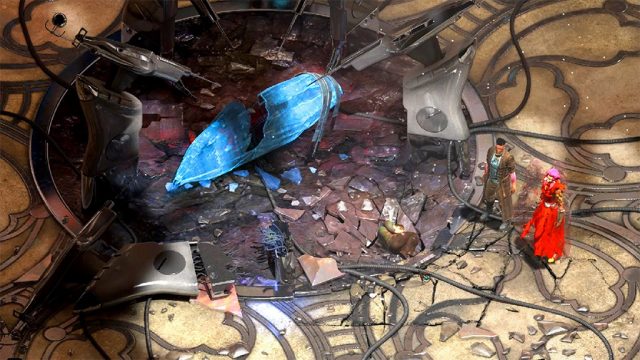 Which brings me to the final big issue with the game – and one which other similar RPGs such as Tyranny have done a better job at doing – telling me what is going on. Yes, I get that the point is my main character is an amnesiac castoff skin from a god. But if he’s somehow remembered that such-and-such is a varjellan, then describe to me that it’s some sort of reptilian alien. Unless you’ve already devoured the various Kickstarter lore books and pen-and-paper supplements, this is entirely an alien and inscrutable world where a little help would have gone much further to keeping me immersed rather than confused. Half the time I struggle to remember who an alien name refers to, and it’s no surprise to me that even the in-game characters call others by nicknames sometimes. And that’s just in English. I honestly wondered how the translations to other languages would go.

Regardless, was Torment worth the over three year wait? We’ve had titles such as Pillars of Eternity and Tyranny come out in the meanwhile to slake our thirst for combat, role-playing and a more classically “Beat the Bad Guy” game style, and Torment similarly scratches many of the same itches. If you’re aching for a ridiculously deep world, tons and tons of reading, pondering, and praying very hard the dice fall where you want them to, then yes, Torment is worth every penny. Fans of killing everything in sight may find significantly less here to shout about, but you’re not exactly Torment’s main target market anyway.

Gokushufudou: The Way of the House Husband TV Drama Announced