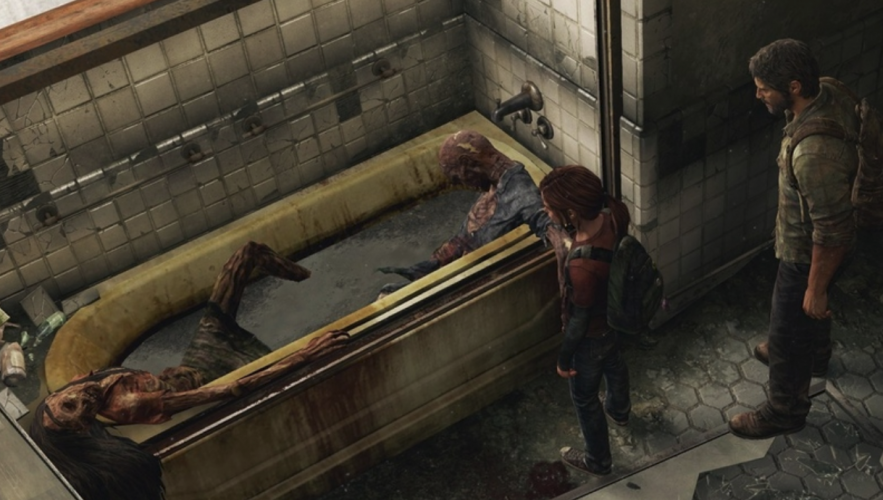 Geek Review: The Last of Us

Once again I took my time with The Last of Us just like how I did with BioShock Infinite. Slow gamer I am.

Naughty Dog does a fantastic job at relaying the post apocalyptic world with stunning graphics and building the emotion connection between the player towards Joel & Ellie. However, the general gameplay disappoints somewhat. The Last of Us is best played for its narrative on the easiest difficulty to save the player some frustration.

Without Uncharted there would be no The Last of Us

The Last of Us is a classic zombie genre combined with Uncharted (PlayStation 3) gameplay and controls. So if you’ve ever played Uncharted, you would be right at home with the controls. Stealth, too, plays a very big part of the game. In this post apocalyptic world, ammo is pretty scarce throughout the entire game. Naughty Dog does very well to aid the player to avoid or take out enemies in the game without using a single bullet for most sequences. Stealth games in general are tricky to execute – The Last of Us gives the player pretty wide leeway to get from point A to B in any manner he chooses. Opt to run and gun and you would find yourself outgunned easily. Opt to thin out the crowd with a few well placed traps or silent bow kills and you would have plenty of breathing room when the bullets start flying.

When the action does take place, it becomes frighteningly brutal.

Naughty Dog portrays Joel as a resourceful and personable individual with an amazingly heart wrenching backstory but it seems that he has an amazing propensity for violence. While I’m not adverse to violence, the graphic nature in which Joel takes out the human enemies in game is savage. I can’t help but wonder why would Joel need to take out someone in such a primal manner when a simple  clean finish would suffice.

It could be said that much of this savagery that Joel channels is a result of the world that he lives in. Naughty Dog does a fantastic job in illustrating the harsh reality that the zombie apocalypse has done to the world. Life in The Last of Us is depressing and we see the rawest form of dog-eat-dog world as humans in the world struggle to survive or, simply, give up. The brutality is something that Ellie is exposed to very often in the game and I was surprised that she herself manifests the same rage that Joel wields. A minute killer at fourteen? Nasty.

The Last of Us suffers from rather poor aiming controls while some might argue that the ‘shake’ that Joel suffers from can be upgraded to reduce the effect, it hardly helps when most enemies move so god damn bloody fast. Combined with the possibility that certain non-human enemies in the game have an instant kill move should they grab a hold of you. But hey, you get to do the same to then in stealth, so I guess that evens things out.

The story always saves the day

The story development of The Last of Us is its stellar portion. Admittedly, as a fan of titles such as Lone Wolf and Cub and Road to Perdition, the basis of The Last of Us is the right fit for me. Father figure who will stop at nothing to protect his loved ones in the most badass fashion? Sign me up!

As the player follows Joel and Ellie on their journey, Naughty Dog throws up plenty of moments that would make your jaw drop in shock. One cannot but help to continue pushing forward to find out just what would happen next. The banter between the two main characters happens so often that one would develop a very strong emotional connection towards the protagonists. Sharp witted teenager duking out with ‘Dad’ is a position everyone can relate to.

Once this stage has been set, the emotional swing of highs to lows invoke euphoria to heart ache. Because of this and combined with rather slow paced stealth action, one would always come out emotionally drained at the end of a battle. I actually look forward to the puzzle sequences in the game over the action portions as it offered more chances to understand the characters better.

Take your time to smell the roses, or rather, hunt for notes and you would be richly rewarded.

The amazing story would not hold if the world that it is portrayed in was not up to par. Equal parts of beautiful and brutal at the same time, the environment amplifies the narrative. Along the way, the player would encounter notes left by other survivors detailing their attempts to simply make it to the next day. The beastial nature and generosity of human nature is perfectly illustrated in this ruined society.

It all comes to an end

The pacing of The Last of Us is excellent. Having played without a guide, it come to me as a shock that the end arrived before I even knew it. I had expected a closure to the finale with an epic battle of sorts (as with most games these days)  but was pleasantly surprised that it was not the case.

Going against the trend is just one of the things Naughty Dog has done in their magnum opus for the PlayStation 3.

I would wipe my memory just to experience The Last of Us just one more time.

Naughty Dog’s final title for the PlayStation 3 is an amazing piece of art that is let down by its poor controls. A must buy for all PlayStation 3 owners. Not a perfect 10 title that would make one rush out to get a PlayStation 3 but a good effort nonetheless.

PS3 Review sony the last of us