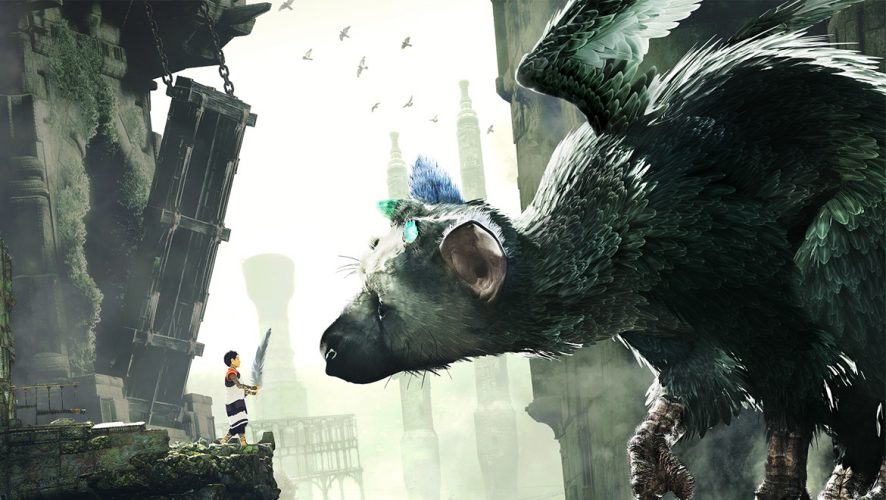 Let’s face it – you thought The Last Guardian would never see the light of day.

The follow-up adventure game to Shadow of the Colossus was actually due out for the PS3 in 2007. Amidst complications, delays and a troubled development history, fans across the world now get to see Team Ico’s masterpiece finally realised on the PS4.

From the lush and sombre aesthetics to focused single-player experiences that show more than tell, this follow-up to Team Ico’s earlier iconic games has a lot riding on it. After all, team lead Fumito Ueda made Ico fun and endearing solely on escort missions. Something must also be said about his ability to craft Shadow of the Colossus as an adventure consisting of just 16 boss fights that tug at your heartstrings.

Given the heralded status of its two siblings, it might be a tad premature to say that The Last Guardian is able to surpass them. For now, this title stands on its own two feet, with its epic and touching tale between a boy and his cat-like griffin hybrid friend.

But there is no denying that this game succeeds in delivering a unique experience and great gameplay design that will likely inspire future generations of players and game makers.

A Buddy Cop Movie In The Works

You play a Boy who’s stuck in a cave with said creature named Trico. The whole story is narrated from the Boy’s perspective after he’s all grown up, as it recounts the tale of how they got into this predicament, and how they got out of the ruins,

Within just 15 minutes, you get to see the scope of the place you’re stuck in: huge ruins, deep within a deep mountain and ravine, where the only method of escape is to fly. For something so simple, the visuals are a feast for the eyes. You’ll spend more time taking screenshots of the valleys, the ruins, the outdoor area and the forest relaxation safe spots.

Trico is also a marvel of game technology, from the way it moves and interacts with the Boy, to how fluffy its feathers and wing stumps are. Imagine the gracefulness and temperance of a cat mixed with the stature of a dog, and you have a creature that mesmerises you as it idly scratches itself or just sits down while you fetch it food. You can feed it barrels of “magic” to sate its hunger, and even give it belly and ear rubs to calm it down. You can truly feel a sense of joy when you see Trico react to these actions.

I personally do not know if Fumito Ueda is a cat or dog person. But you can clearly see that he and his team have done a lot of research to see how domestic animals act, and how feral ones can be tamed.

The developers clearly have studied the movements and behaviour of pets, especially when they’re stuck in a new environment. Only, the said pet is a 15 feet tall bird/cat/dog thing with red lightning coming out of its tail. Trico acts like a growing animal trying to learn tricks and mimicking its master, while also showing loyalty and camaraderie to the Boy as the story progresses.

The majestic and minimalistic score by Takeshi Furukawa also accentuates the art and design of the game. Sweeping orchestras are placed for tense and triumphant moments, while wind instruments fill the gentle bits. Even the sounds of footsteps and the growls of Trico gets a fitting treatment, and everything here gels perfectly audio-wise.

The main crux and key theme of the game is seeing how both the boy and his pet share a tight bond during their time of imprisonment. This aspect of the game is delivered with flying colours, as there are no forced dialogue or any unnatural story ideas shoved in. Everything, from its story delivery and the interactions between the two to the game’s dark beginnings and gripping conclusion, comes naturally. Don’t be shocked if Trico gets nominated for “Best Video Game Character Of 2016”.

The adventure game and its plethora of puzzles are built around how players cooperate with Trico. The Boy can crawl through tight spaces and pull levers to open pathways for the big guy to go through. However, he can’t fight or jump very high and all the heavy lifting falls on Trico, who can swipe enemies with ease and leap tall bounds like a cuddly giant cat.

Like Team Ico’s previous games, The Last Guardian‘s puzzles and challenges are based on the environment and figuring out how to use the existing skillsets of both the Boy and Trico to solve those brain teasers. For example, if Trico is barred from moving because of particularly eye-catching glass panes, the Boy will have to find a way to dispose of them, usually in sky-high areas with rickety bridges and platforms.

If there’s a far-to-reach wall that needs destroying, the Boy will need to use a mirror shield to shine a light for Trico to shoot lightning with its tail. Like a laser pointer for a cat, if you will, but for target practice instead of distracting it. If there’s an area with suits of armour that come to life, you’ll have to head back to Trico and let it deal with those nasties.

Sometimes, you might have to get off the ground and deal with enemies who can halt Trico in its tracks. You will climb onto Trico’s back and hang on to dear life as the lumbering giant leaps from pillar to pillar with cat-like grace. Its tail can be used as a makeshift rope, which opens up puzzles where you need to crawl through tight spaces with no floor below.

Every level and puzzle here are designed well. They are not too difficult but at the same time encourage players to explore and think a little outside of the box. The narration doles out hints if you are stumped. You will eventually solve it but patience and environmental observation are key. If you are stuck and need a breather, some areas have balconies with a lovely view for you and Trico to soak in.

For the most part, you don’t have to worry about Trico’s well-being. Rather, you have to be mindful of him being an animal, learning new things and being distracted by instinct. During the earlier bits of the game, the cat-like Trico is distracted and can have its blonde moments. The fickle beast will just leap around or simply follow you. At the game’s midpoint, you can command him to sit, stand on its hind legs so you can use it as a stepladder for hard-to-reach places and so forth.

It’s the bits where Trico stalls and repeat commands that can grate players, especially those who want to quickly finish the game. But this game is supposed to be enjoyed at a comfortable pace, as an experience for the senses and the heart. Even though there’s an achievement for completing it in less than five hours, The Last Guardian is not supposed to be completed on a speedrun.

Still, having Trico not go where you want, especially in the second half of the game when the beast is a tad wiser, can be a touch frustrating. It did make us wish there was a slap button from the Black & White PC game series. But really, would you want to do that to Trico? Would you?

While controlling the Boy is as standard as it can get with the appropriate heft and weight to his movements, climbing on Trico can be a bit tricky. This is especially so during hectic moments when Trico is leaping up and down in a frenzy. The camera can be a bit of a pain when trying to spot and direct which areas Trico can climb to. It can zoom in way too close at tight spots but your experience might vary.

The game is a visual marvel but there were some moments where the frame rate falls. It’s not game-breaking, but something tells us that future updates will need to sort that out. This game was reviewed on a regular PS4, so there’s a chance that the PS4 Pro might fix that nitpick.

I had a cat named Pepé back in Malaysia. White, grey, temperamental, playful, hugely independent. He lived a good long life with us from a wee kitty to a grandfather tomcat who could barely meow. When navigating the harsh ruins with Trico, I see shades of Pepé in the griffin-like fella.

The Last Guardian needs to be experienced and played by everyone. Delving beyond what we mentioned above is to go into spoiler territory, but we implore you to jump in. Do that and you will most likely shed a tear or feel an emotional pull throughout the whole adventure. While not the most original tale on earth, its execution and its design is close to being perfect.

As a side note, Fumito Ueda did show us that like all house pets, Trico does poop when you least expect it. It’s translucent green, if you must know.

Sony Interactive Entertainment capped off the end of 2016 with a megaton of an adventure title filled with heart, soul, and a big friendly giant.