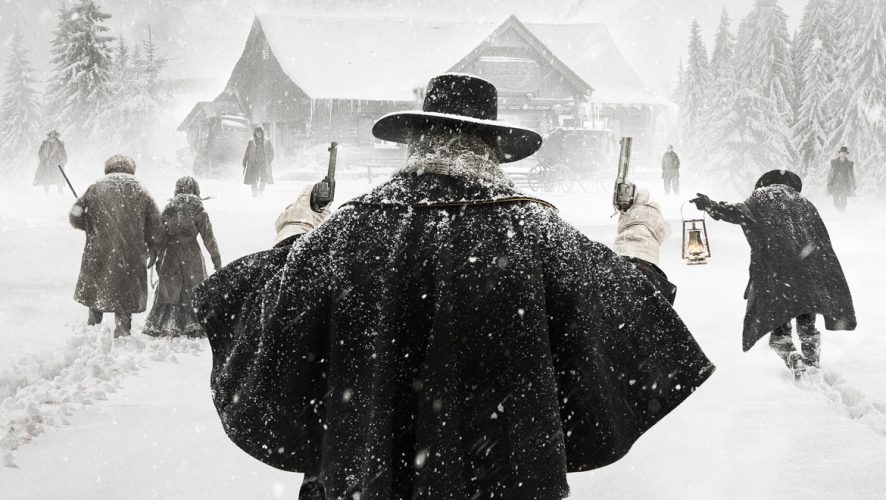 Quentin Tarantino – one of the geekiest film directors ever – is back with his new film, The Hateful Eight. Part whodunnit and part western, The Hateful Eight is superbly shot, wonderfully written and filled with amazing acting – yet another fine example of pulp cinema for the modern age.

Visually, The Hateful Eight is quite a sight to behold. Shot in 70mm, Tarantino’s geeky adoration of filmstock means that we get great images that just deserve to be seen on the big screen. If you’re looking for a visual treat, don’t even wait for the Blu-Ray – and in fact, if the 70mm version ever comes to Singapore, find time to see that.

(A quick aside: The 70mm projected version comes with a proper intermission, after which cinema staff will narrate the beginning of the second-half of the film. Would pay extra to see our own cinema staff do that!)

And yet, beneath all this beauty lies the dark heart of Tarantino’s eighth endeavour. The Hateful Eight tells the tale of eight people stuck in a Wyoming blizzard. John “The Hangman” Ruth (Kurt Russell) has with him a live bounty – Daisy Dormegue (the wonderful Jennifer Jason Leigh, totally deserving her Oscar nomination) – who he’s delivering to the town of Red Rock. On the way he picks up fellow bounty hunter Major Marquis Warren (Samuel L Jackson, possibly robbed of an Oscar nomination) and later Chris Mannix (Walter Goggins), before the blizzard forces them into Minnie’s Haberdashery, where they meet the rest of the Eight, and get stuck till the storm passes. 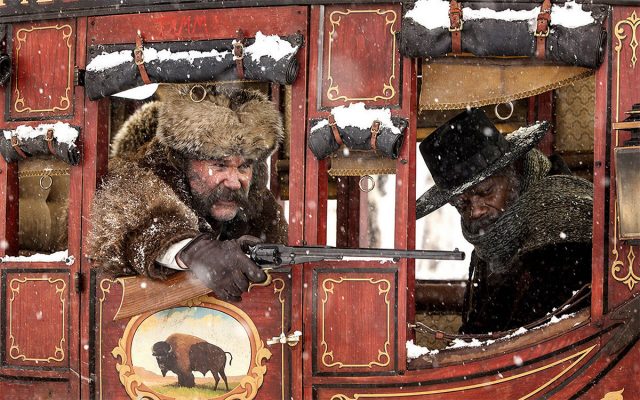 With all of them trapped in the same room, John Ruth gets worried that someone might be trying to free Daisy. Mexican Bob (Demian Bichir), Oswaldo Mobray (Tim Roth channeling a version of Cristoph Waltz, who was probably channeling Tim Roth to begin with), Joe Gage (Michael Madsen, as world weary as ever) and General Sandy Smithers (Bruce Dern), a Civil War veteran that fought oppositie Marquis Warren, make up the rest of the eight, and as the snow thickens outside, the walls close in.

The Hateful Eight is told “bottle episode” style – other than some wonderful views of the snowy mountains, most of the action takes place in a small room where the characters can barely avoid each other. It’s a wonderful homage to John Carpenter’s The Thing, with its claustrophobia and paranoia seeping into every facet, with all characters eyeing each other with distrust for one reason or another. Tarantino’s script plays it very well – all the characters all have an interesting story to tell.

In a sense, fans of Tarantino will get what they expect. Fantastic dialogue, blood splattering violence, and constant ramping tension that will have you on the edge of your seat. Pacing here – even with the chapter titles and intermissions – is steady, building up slowly but incessantly into the end, and making the 2h47min runtime pass in a snap. It’s not as “white knuckle” as Inglorious Basterds, but it’s an enthralling watch from beginning to end, even if the story can be predictable in its bloodshed. 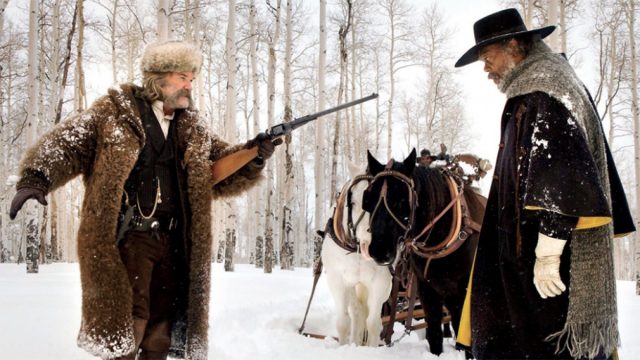 Compared to some of his previous movies, what changes is how, in a world of flawed Tarantino anti-heroes, there isn’t quite anyone to root for. This isn’t a hero’s journey like Django’s – after all, the title reveals the core of the film, that all eight men in the room are hateful, cruel men. Nobody is a victim here – Daisy is no whimpering wallflower, and Major Warren, the closest the movie comes to having someone you can empathise with, is no simple war hero.

Samuel L Jackson’s Major Warren plays a key role – he’s a black man trapped in a roomful of white men. And while this is set not too long after the Civil War, The Hateful Eight might be Tarantino’s most timely film yet. The movie speaks directly about events of today via the lens of the Civil War. As Warren puts it: “The only time black folks are safe are when white folks are disarmed.”

It’s a pity that this commentary might be lost under Tarantino’s penchant for excess – many, after all, might watch The Hateful Eight just to witness violence writ large on the screen. But dig deeper beneath the layers and it’s a despairing Tarantino wondering how we’ve come so far since the Civil War without going anywhere at all.

This is Tarantino at his most bile-spitting angry self – all the world’s a stage, and each of us are complicit in some way for the horrors of the world, where even the most downtrodden deal evil upon the world to stay alive.  It’s not his best work, but with its anti-racism message, it might be his most timely and important movie yet.

The Hateful Eight is another great film from Quentin Tarantino. While it isn’t his best, it’s bolstered by amazing performances and a tight script that is all-too relevant today.

The journey back to Saint Haven promises much, but doesn't quite deliver as expected.