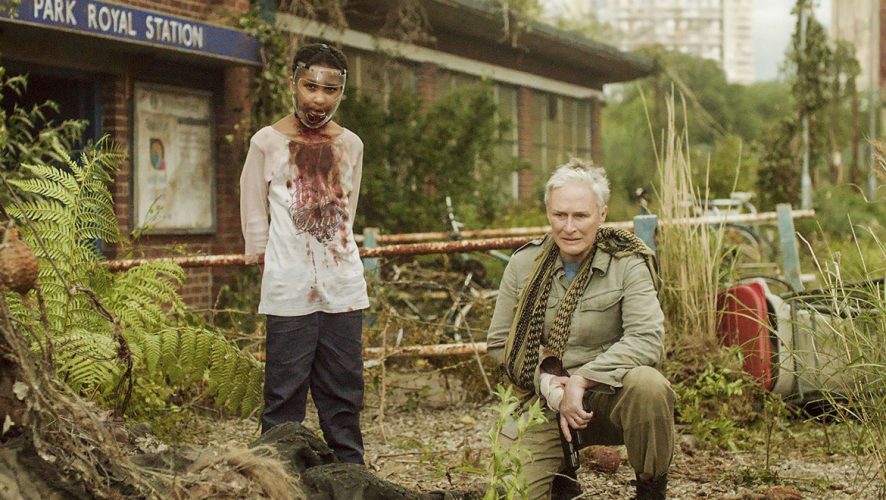 Geek Review: The Girl With All The Gifts

It’s no secret that the zombie film genre has worn out its welcome, be it on the big screen or on TV. Hell, the only ones worth noting are at least the George A. Romero flicks (the early ones), or a remake of Romero’s Dawn of the Dead by Zack Snyder, and well, maybe the Dead Rising series of games.

So what happens when you ask British writer Mike Carey, the guy behind the Hellblazer comics and a really good 76-issue run of X-Men: Legacy to adapt his award-winning short story, Iphigenia In Aulis? You get a heartfelt film which focuses on a little girl and a mother figure archetype, along in a post-apocalyptic mess caused by a brain-eating fungus that turns people into fast-running flesh-eating zombies called Hungries.

The Girl With All The Gifts starts off with our child lead Melanie (Sennia Nanua) chained up on a wheelchair guarded by soldiers. She and a few other children of the same age and also chained up on wheelchairs are being educated in an underground facility, taught by Helen Justineau (Gemma Arterton).

It turns out Melanie and other the kids are an abnormal type Hungries: they are brilliantly smart with genius level IQ but still have an insatiable hankering for living meat. Within one of the kids is a cure for the fungus, and Glenn Close’s Dr. Caroline Caldwell is cutting up the kids to find it.

Carey’s screenplay and Colm McCarthy’s direction presents us with familiar tropes, but doesn’t beat us over the head too much with unnecessary backstory and jargon. Instead, the movie focuses and fleshes out what’s important: the fact that a cure for the epidemic is at hand thanks to the findings of Dr. Caldwell, how Melanie bonds with the remaining survivors, and how her true nature plays out in the course of the tale.

Featuring great direction of photography and lingering scenes for tense and emotional moments, you’ll be drawn into a familiar-yet-intriguing scenario. You won’t find shock and awe twists and turns here, but rather a gradual resolution of the story and its bleak-yet-hopeful scenario.

You’ll get invested into how Helen’s acceptance and handling of the situation during and after her time in the army bunker. Sgt. Eddie Parks (Paddy Considine), the de facto leader of the ragtag group, has an aura of animosity and superficial gruffness, but that tough exterior is gradually worn down to show how human he still is, In contrast, Glenn Close’s portrayal of a cold and the-ends-justify-the-means scientist is bone chilling.

The crowning achievement, of course, goes to Sennia Nanua. Her portrayal of Melanie is outstanding; she’s a smart yet precocious girl bearing a heavy cross of being an involuntary savior, rejected by most. You’ll be invested in how Melanie deals with the main characters and how her childlike wonder plays out, though at the same time her innate animal instinct for living flesh rears its ugly head when least expected.

Nanua’s acting really shines in the parts where she is forced to don a Hannibal Lecter-like faceguard or when she’s strapped on the roof of an army vehicle, or when she’s out exploring the parts of a Hungries-infested London. Other memorable scenes include how Melanie slowly wins over the gruff Sgt. Parks and his right-hand soldier Gallagher (Fisayo Akinade), as well as her sincere affection for Helen which is played out over the course of the movie.

The Girl With All The Gifts is the kind of kick-in-the-pants change of pace the zombie genre flick needs to stay relevant. It’s not the fast action flick like Train to Busan, but it’s fresh and well-shot. More importantly, the movie does tackle the the pressing ethical question would you kill off a bunch of children for the greater good?

One of the few surprises at the tail end of 2016’s movie list. You will believe that a worn-out genre still has some surprises and ingenuity left in store.