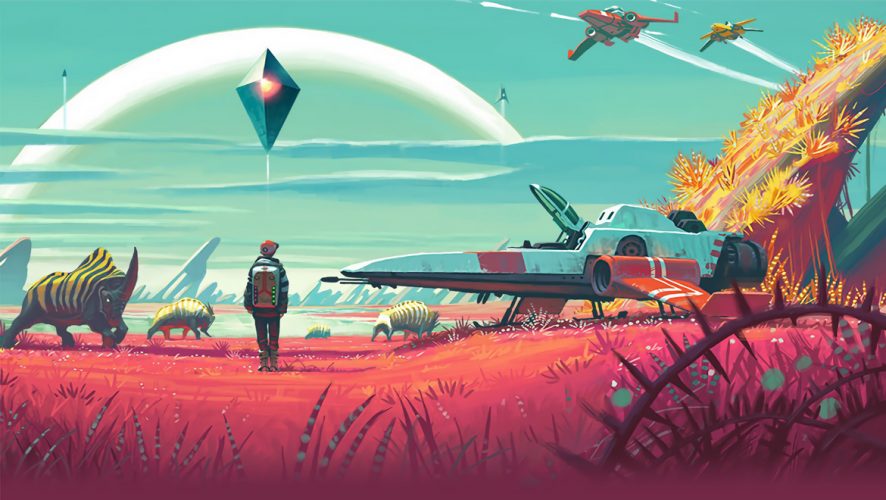 No Man’s Sky is not a game for everybody.

Those hoping for a game that allows them to live out their fantasies as a space pirate by blasting through the galaxy, while trading here and there, will be sorely disappointed. No Man’s Sky is a game of discovery and wonder. The universe you are thrust into is a procedurally-generated world so large that it’s impossible for any one person to visit them all.

You begin the game stranded on a planet with your ship in desperate need of repair. You’ll soon discover the core aspect of the game that is dividing gamers out there – resource farming.

Harvesting plants and mining the various minerals and rocks, will give you the materials you need to repair your ship and allow you to get into the wonders of space. These resources are also needed to keep your life support system going. You will need resources to repair your suit, refill your weapons and fuel your ship. Resources are important, and collecting them is the main push of the game.

And with this comes inventory management and some love it, while others hate it. For me it has never been something I’ve found fun, and my opinion hasn’t changed with No Man’s Sky. Within the first hour, I ran out of space for both my character and ships inventory, but it was a problem I learned to live with. There are ways to expand your inventory though, by finding technology upgrades that are located on the planets. Time to get those exploration boots on. 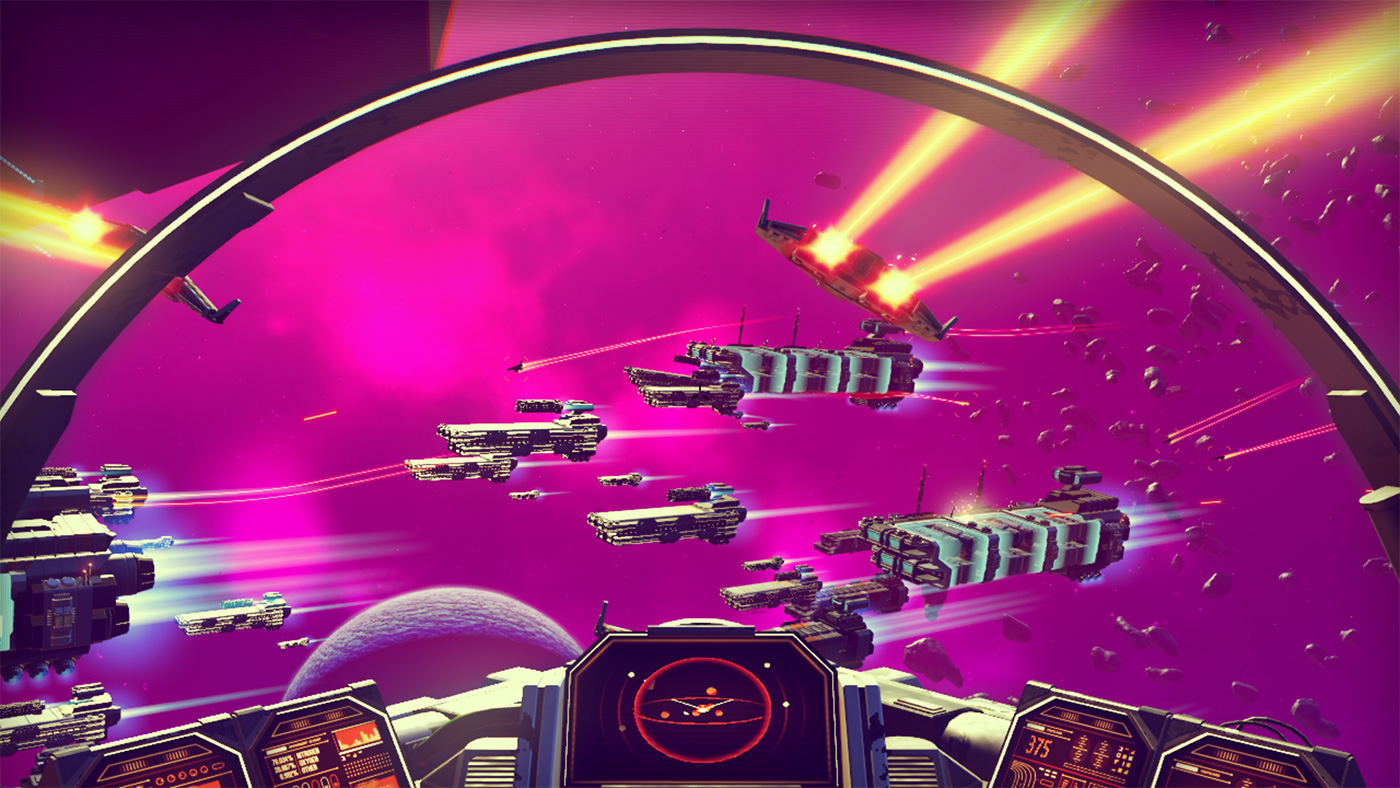 The thrill of flying around and visiting new planets, landing on them and finding out what they have to offer, is truly exhilarating. This is the best part of the game and I haven’t gotten tired of exploring the game in the slightest. In fact, I spent around 6 or 7 hours on the first planet, before deciding to go have a look elsewhere.

Once off that planet, the scale of the game is incredible. So I immediately turned around and went back to the planet I started on. It was a little overwhelming and I actually returned in order to try and find that last pesky creature that I hadn’t scanned, to complete my planet log. The scanning system adds an extra layer to the exploration, as it rewards you with money for scanning the resources and animals of that particular planet.

No Man’s Sky nails the feeling of isolation, which is no mean feat since no other game has done it well thus far. It’s pure horror if you land on a hostile planet where everything wants to kill you (atmosphere included!), and you have no help coming from anybody.

But you need to be there. You need those resources. On a more peaceful planet, you can have a truly relaxing experience by logging what the planet holds, learning the alien language and just taking in those wonderful vistas you can stumble across. I know not everyone (you know who you are!) will be caught up with all the collecting and walking around the randomly-generated planets, but for those of us (you also know who you are!) who can get caught up and swept along in all the little details, it’s a delight for the eyes and ears.

The small narrative hook that pulls you towards the center of the universe is interesting too. The game gives you just enough information and knowledge to progress to the end goal, while still keeping what that goal is mysterious. Whether or not you enjoy these elements is really going to come down to this – Do you like exploration? Do you have a sense of wonder? Can you spend hours basically doing nothing other than wandering a planet’s surface? If yes, this is the game for you. 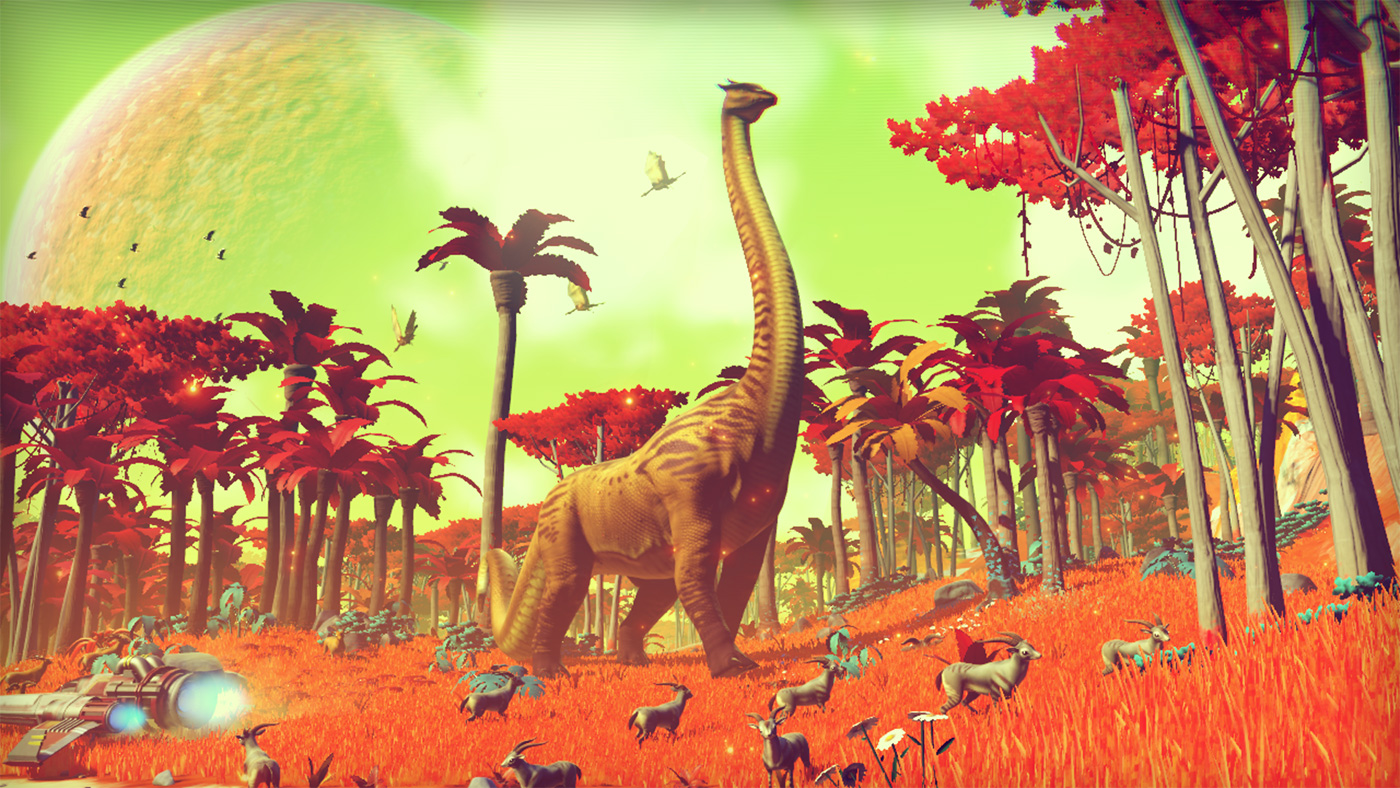 The worst aspect of No Man’s Sky is the combat. The idea of having battles in the outer reaches of the galaxy sounds great on paper, but the execution is poor and frustrating. It seems that the space ships you fly are just not designed for combat. They are sluggish and hard to get to grips with when you need to dodge incoming fire and all the space debris that is littered about.

Combat on planets is even worse. Aiming your weapon and hitting an enemy with any consistency is nigh on impossible. It’s easier and safer to run away. If you do die in this game, you start back at the last checkpoint you saved at, and must make it back to where you died, in order to collect all your inventory items.

It’s a strange design choice, but it can lead to some hectic moments as you try to get back to all those wonderful resources you collected, and now might lose. In all honesty, there should have been an option in the menu to turn it off combat as senseless fighting only got in the way of the exploration! 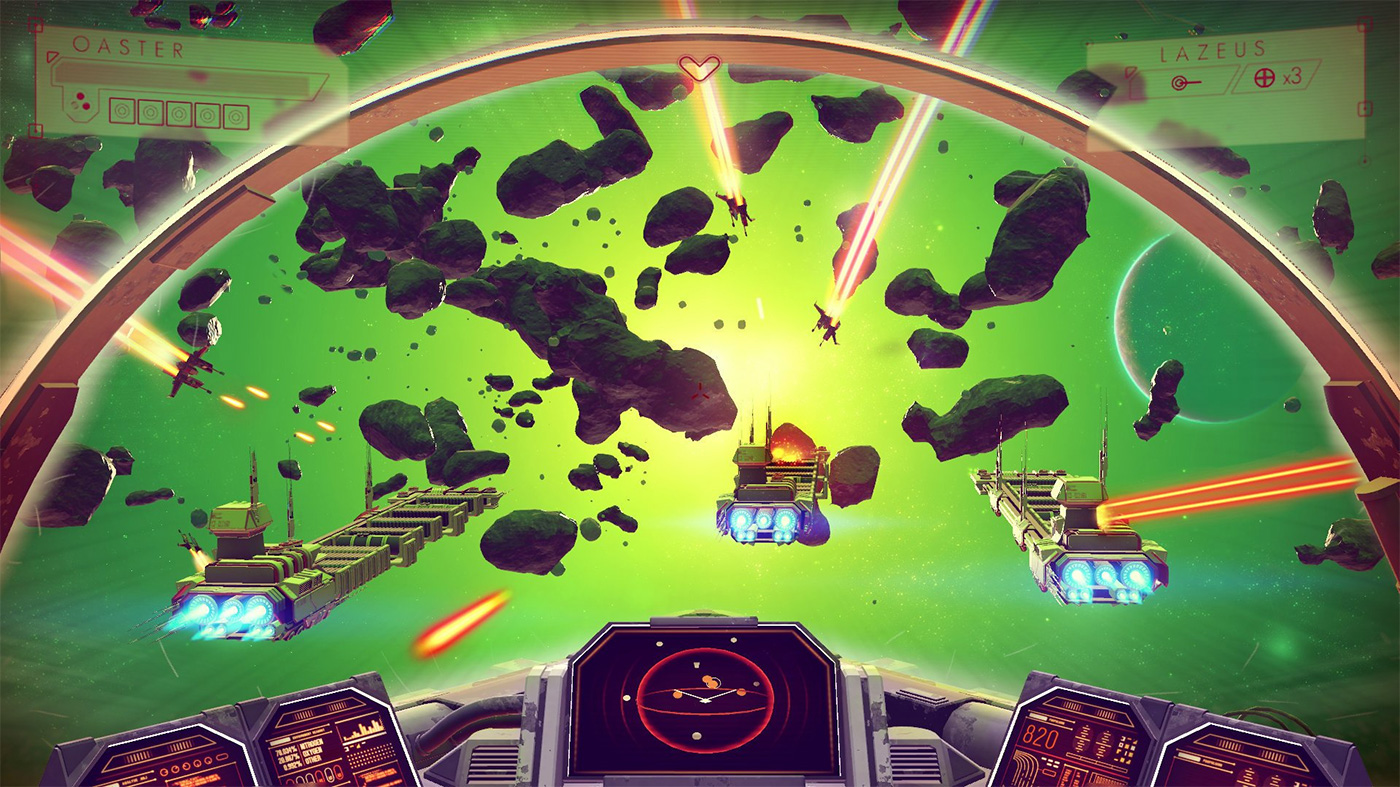 On the technical side of the game, the procedural game generation may not always give the most cohesive-looking results, but the worlds you discover are always vibrant and interesting.

Alas, the game has some terrible pop-in and this usually happens when you are flying your ship just above the planet’s surface. It is poorly disguised, with a weird grainy/mushy effect that just looks damn right bizarre. During my playtime, I had the game freeze a few times too. This was very annoying as in most cases, you will probably lose a couple of hours of progression.

No Man’s Sky took a risk with its game design, and for me Hello Games made the right choice. I can see some players taking issue with the lack of direction and narrative, but I personally found that to be the best part of the game. The real beauty and appeal of No Man’s Sky is in the discovery of the worlds, and the life forms that populate them.

My journey to the center of the universe is currently on hold, as I flew off in the opposite direction. I want to to explore strange new worlds. I want to seek out new life and new civilizations. I want to boldly go where no..wait. This sounds familiar…

No Man’s Sky is available now on PS4 and PC.

No Man’s Sky is an ambitious indie title that gives players a massive sandbox to explore. If you are looking for a game with excellent space combat, a solid narrative and a clear guiding path on what to do then this is not the game for you. For gamers with a sense of wonder and exploration, this is a game you must play and experience.