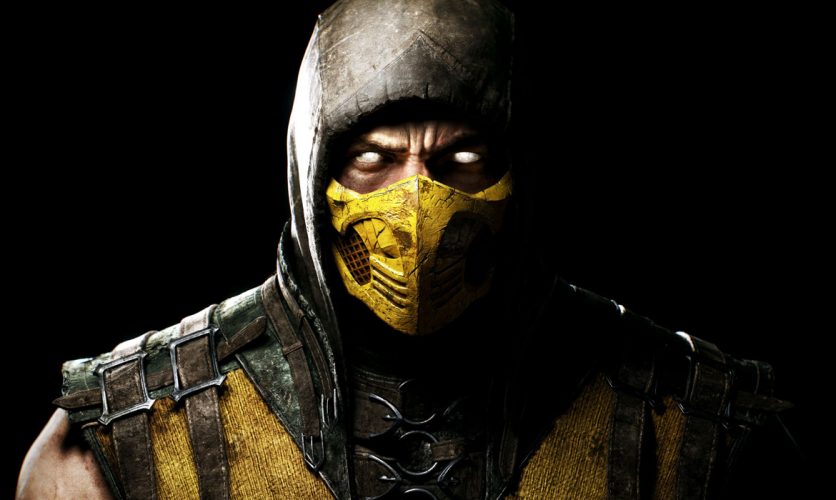 Say you play a fighting game for the plot, and people are going to give you the same look as if you just declared that you watch Ghost Whisperer for the plot. But that is exactly why Mortal Kombat has the greatest emotional impact on me of all the big fighting game franchises (though I can say the same about Ghost Whisperer’s sweater puppies plot).

It started with those bio kards during the demo screens in MK1, setting the scene and explaining character motivations. This came at a time when you couldn’t figure out what a Street Fighter’s story was without asking around and doing some heavy-duty research, and there was no Internet back in those days. MK2 and MK3 continued this tradition and further enriched the storyline with greater intrigue and interlocking character stories (no isolated plots about someone needing to prove his strength to his dead wife here).

But it went sour after that. The plot got convoluted and silly with more and more characters like a winged vampire and a female version of an old favorite. It lost all the charm and appeal of its roots. The one bright spot in the franchise’s mid-history was the action game Shaolin Monks, which rehashed the plot of MK1 and MK2, fully fleshing out the stories hinted at before.

Fast forward to the MK reboot (technically MK9) and Ed Boon and the team delivered an amazing product that took us back to the klassic MK 1 to MK 3 storylines and properly integrated them into an innovative campaign structure that gave you the best single player fighting game experience ever. You loved the characters, you loved the ikonic stage locations, and what a brilliant decision it was to bring back the 2D style gameplay dressed up in 3D glory!

So the question on everybody’s lips for MKX X would be… Did they replicate the magic? 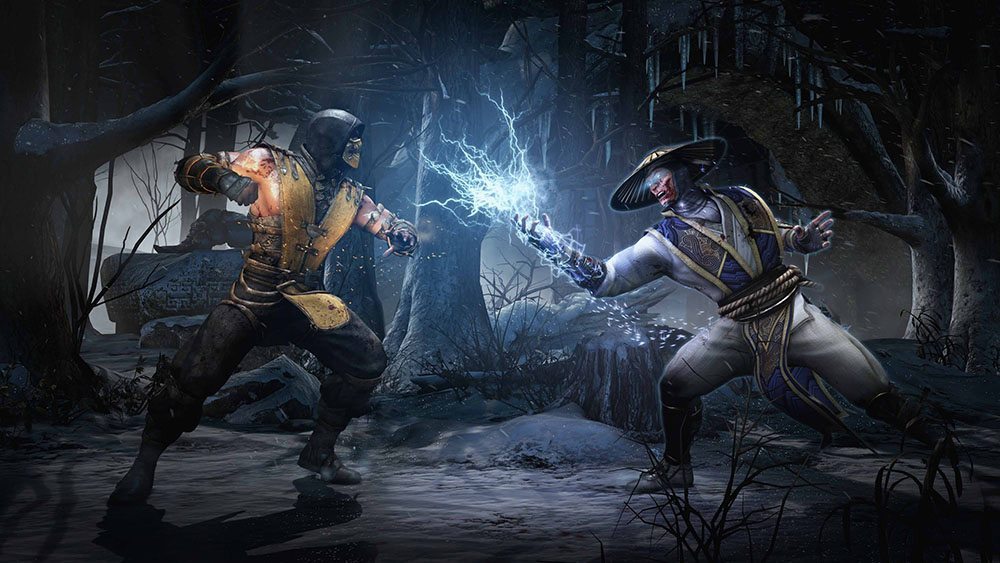 The single player campaign structure that made MK 9 so amazing was replicated in Dead or Alive 5 and Injustice, but with varying levels of success. DoA 5’s story was a mess, and Injustice had an entire chapter where an inconsequential character who was there just because he exists in the DC universe fights a whole bunch of people in the same stage for no discernable reason.

MK X breaks new ground by moving forward in the storyline, with the majority of the game taking place 20 years in the future and featuring a new generation of fighters in addition to our old favorites. Outworld now has a new leader with a new cast of lieutenants like the much-publicized D’vorah. The old heroes have children now that are also kombatants fighting to protect Earth realm… And Johnny Cage and Sonya Blade have a daughter together (didn’t see that one coming, did you? Unless you read any previews, that is).

Normally I would be so skeptical of so many new characters but the campaign makes full and proper use of all of them. They are all deeply connected to the storyline and none of them feel extraneous. Even if they don’t get a chapter of their own, you see enough of them to develop them as characters and gain some emotional attachment to them.

Special mention goes to the children of our old heroes, because this is normally a gimmick to reskin old characters to appeal to a younger demographic, but this bunch was particularly well thought out and felt fresh and unique. There is a sequence in particular where they compare stories of living under the shadows of their legendary parents, and this is a theme you would not have expected in a Mortal Kombat game.

Cassie’s parents are separated, Takeda has a strained relationship with his absent father Kenshin, and so on. It is quite a poignant scene and it gives them so much more depth than just the brash and inexperienced next generation.

Likewise, the Outworld characters have a civil war going on, with Mileena leading a rebellion against the new rules Kotal Kahn. It’s not quite Game of Thrones, but it’s more than was necessary of a fighting game and quite satisfying.

There wasn’t space in the story for some of our old favorites like Liu Kang and Kitana, but the story creatively keeps them in the game as Quan-Chi’s undead slaves.

All in all, the story will keep you interested all the way to the end of the game and is a worthy kontinuation of the Mortal Kombat story. 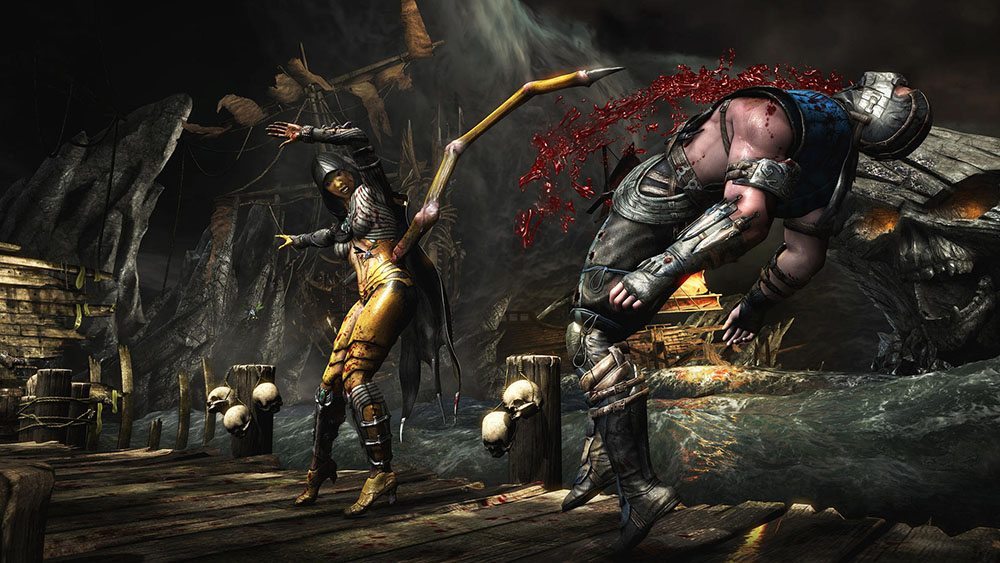 MK X is the first of the series to take advantage of next gen graphics, and it was worth it. Fighters will bleed and bruise during the fights, and their costumes are amazing with detailed textures. Scorpion has never looked better! The faces in particular have gotten, well, a face-lift and the human faces look so well done. No need to cover them up with ninja masks anymore!

A special mention must go to the female characters, because they wisely toned down the stupidly large breasts from MK 9 (and Mileena’s barely-there outfit) and now the female figures look amazing. You still wouldn’t mistake them for Keira Knightley but they look so much more pleasantly proportioned now.

The stages didn’t get left out either, and there are some really memorable set pieces, like an Outworld port with epic waves crashing into it. The stage interactions make a return, and there are some truly hilarious ones like grabbing an old lady shopping in a market and swinging her like a club at your opponent’s face! The end result is a scene that truly looks next gen. 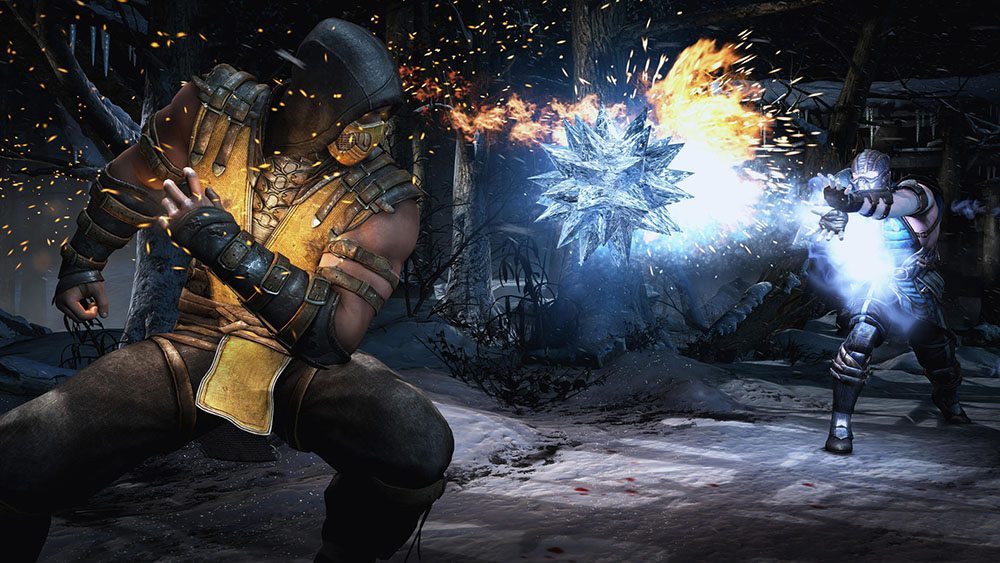 The biggest new addition to the Mortal Kombat gameplay is the ability to select one of three variations for your characters. The variations are less like the stances of Mortal Kombat Deception (where you have a different move set and have to pretty much learn a whole new character) and more like the Generals in Command and Conquer: Zero Hour in the sense that they’re slightly altered styles of the same character. Each variation will retain the core moves of the character, like Scorpion’s rope-spear for example, and add extra special moves for a little bit of flavor. Sub Zero has a version that gives him ice weapons, and Takeda has a variation that gives him Omega Red-style energy whips.

What you end up with is more ways to play your favorite characters, with variations that can help them overcome certain other types of characters. It’s a great little addition that gives the already impressive character roster even more depth.

But unfortunately, the only place you’re likely to use these variations are in the multiplayer mode, as you can’t choose the variations in the story mode. Online multiplayer in MK X is, well… if you’re not a hardcore player, be prepared to be frustrated.

When you play against your friends, generally in front of the same TV, you play to have fun. The online community of MK X likes to play to win, and sadly that usually means spamming the same kombos and moves. This wouldn’t affect you if you’re an experienced player who knows how to overcome this stuff, but if you’re a casual player then it’s going to be a repetitively bad experience. Expect to see a lot of Scorpions, and Jacquis.

To encourage online kombat, there’s also a new Factions mode where you choose a Faction to represent and accumulate points for (now that I write it, it sounds like the house points in Harry Potter), but it’s not really that big a deal and you never really develop that much of an affinity for the faction. A perennial favorite of the series, and they are fabulous this time around. In every Mortal Kombat, there’s usually a trending fatality style. In MK 1, it was beheading. In MK 2, it was torso rips. Now in MK X, punching holes in your opponent seems to happen a lot.

But there is a lot of variety, and they all look very cinematic and gory; I haven’t seen an unsatisfying fatality yet! There are unique graphics for when someone gets their face munched off, or if they get their face dissolved by acid, and you’ll take quite a while before you see all the fatalities.

That said, the X-ray moves are back and well… I’m getting awfully tired of them. The sequences last too long, and there’s only so many times you can see someone get their spine smashed before it gets tedious. If I could hold a button to skip the sequences, I definitely would. They’re still better than the ones in Injustice (I hated seeing Superman punch someone into orbit a hundred time) and those Final Fantasy Summons.

Buy it. Forget the chatter about DLC and microtransactions. Just because someone needs to pay money for Easy Fatalities doesn’t mean you have to. And you don’t really need those other characters to enjoy the game either. The concept sucks, but it doesn’t detract from a superb package.

PS here is my tribute to the 2D Mortal Kombat games.

A worthy successor to the Mortal Kombat lineage.