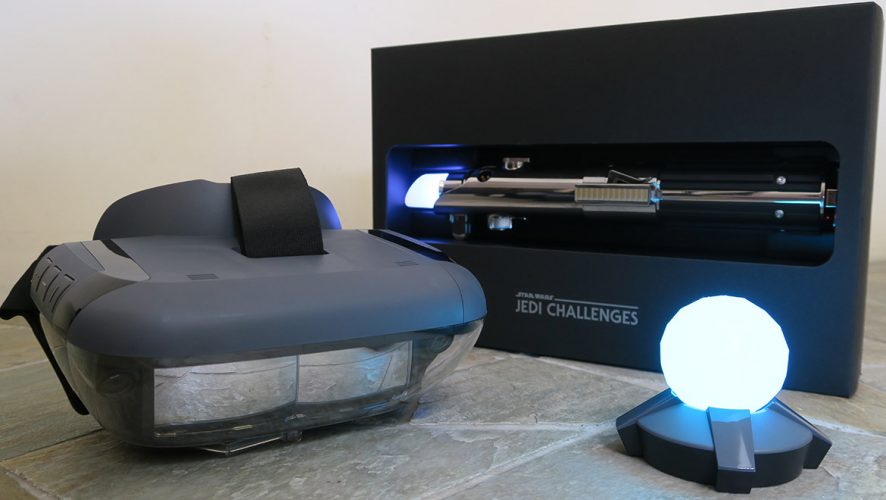 From the time we’d watched Star Wars: A New Hope, we’d wanted to be lightsaber-wielding Force users. Sith, preferably—Darth Vader, specifically—but we weren’t too sure if we could keep up in a competition with only two winners.

Throughout the years, we’d experimented with lightsabers of varying quality. Remember The Force Lightsaber by Kenner in the 80s? It had holes at the end of the blade that hums with every slash and swing (hear the sound it makes via this video). Then we graduated to collecting Master Replica’s Force FX lightsabers, which were a little closer to the real deal but too expensive to battle at the playground. They are currently secured in the safe confines of a vault (read: storeroom). The closest we’ve come to realising our dreams was to step into the skin of Galen Marek in The Force Unleashed game. Slashing and swinging through the Wii’s nunchucks, it was the best lightsaber dueling we’ve experienced. 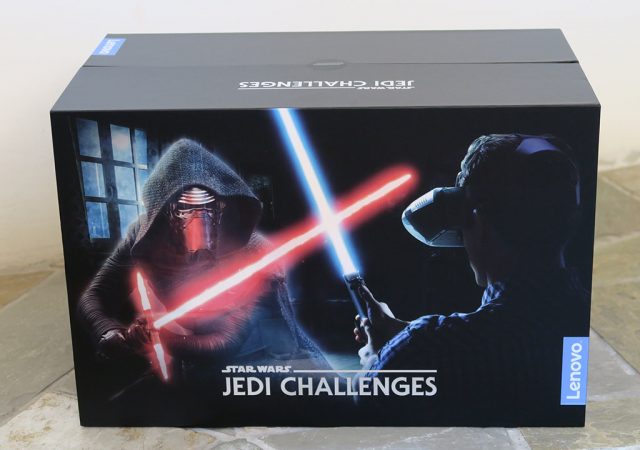 Enter Star Wars: Jedi Challenges by Lenovo. Stepping firmly into the 21st Century, it uses your smartphone to plant you in the Augmented Reality (AR) battlefields of a galaxy far away.

The set comes with a Lightsaber controller in the shape of the topical blue-blade Anakin Skywalker Jedi weapon, the Lenovo Mirage AR headset and a glowing orb that is a tracking beacon. Gameplay is focused around the beacon and players may walk around it to survey the terrain. It also trains the enemies around a playable grid so you know where to swing your lightsaber at (see more below).

What’s in the box?

Set up is simple enough. Charge the lightsaber controller and AR headset with the supplied Micro USB charger, plug two AA batteries (included) into the beacon and you’re set to wipe out an entire village of Sandpeople.

The experience is open to Android and iOS users holding the iPhone 6 to iPhone 8 Plus iterations, Samsung’s Galaxy S8, S7 edge and S7 handphones, Google Pixel XL and Pixel mobile phones, the Moto Z2 Force Edition, and LG G6. Lenovo is adding more devices so don’t be too upset if you don’t hold any of the devices listed.

Now that we’ve got the niceties out of the way, let’s get to the actual gameplay. There are three game modes, or as the box says, three Jedi challenges. Test your military tactics in the Strategic combat mode. What I like about this challenge is that it allows you to view the battlefield from a bird’s eye view, similar to the sand models we used in the army. It can be a little confusing using the controls in the thick of battle but, hey, wars are not supposed to be easy.

The holochess was my least favourite mode since there aren’t any wookiees to beat. It does, however, present a really neat holographic chessboard that will make you feel like you’re in the galley of the Millennium Falcon.

But, who are we kidding? You’re here (as I am) for the lightsaber battles.

The game progresses across six worlds, starting with Naboo to Garel to Lothal, Hoth, Takodana and Core Worlds so you will get to meet your favourite characters across the prequels, OT and the sequels.

However, before you can face off against the “boss”, you’ll have to hone your skills by taking down droids or stormtroopers. At Naboo, you’ll face Darth Maul. At Garel, the boss is Seventh Sister and we couldn’t even get past the waves of stormtroopers, scout troopers and the heavily-fortified sandtroopers at Lothal to duel the Inquisitor.

I’ve said the Star Wars: Jedi Challenges AR system presents the best lightsaber experience I’ve had and I stand by it.

The hilt-slash-controller provides just enough heft and feedback for it to feel like a Jedi weapon without any danger of us slicing any hands off or knocking down tables. Besides slashing and killing, players upgrade their skills with cool Force skills, such as Force Push as well as passive skills like Resilience.

To reach the boss, or as the game calls it, guardians such as Darth Maul, Seventh Sister, the Inquisitor and more, you’ll have to go through the grunts like droids and stormtroopers. There are three levels of difficulty that you can advance to after you’ve conquered all the worlds. The lightsaber also lets you deploy myriad armaments and heroes in tactical combat. You can even use it to focus your troops’ assault on a particular target. The controller also lets you make your moves for the holochess. 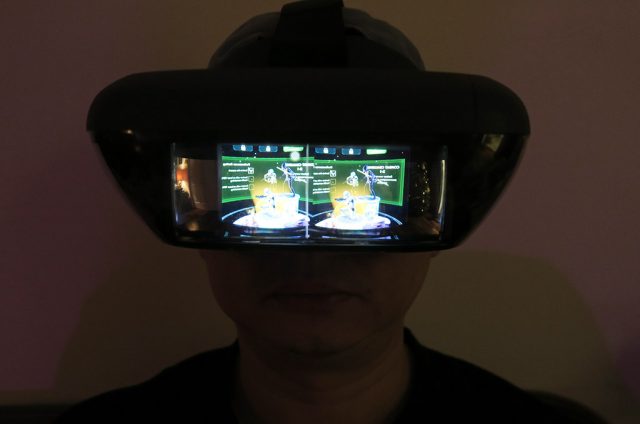 The beautiful holographic game scenes are delivered through the Lenovo Mirage headset. The heavily padded helmet is so comfortable that you would not realise you’re wearing it if it weren’t for the impossibly beautiful galaxy in your living room. Even for bespectacled geeks, the bucket feels snug against our heads without pressing into our skulls.

Unfortunately, gameplay can get repetitive. Current AR technology isn’t sophisticated enough to capture furniture and turn them into terrain for us to gain “high ground” so limitations are beyond Lenovo’s scope.

When I started, I was on my feet and rushed to decimate anything that came my way. By the time I reached Garel, I was sitting on my ass and waiting for stormtroopers to walk into my slash zone.

The rate at which your smartphone heats up during the game doesn’t help either. 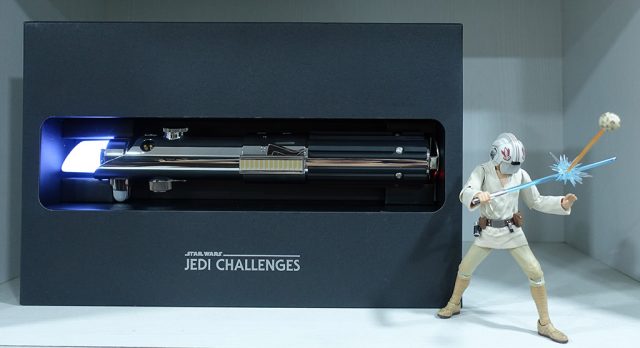 Within 15 minutes of play, our smartphone got scalding hot. The longest I’ve held out for was 30 minutes, and while I was not able to feel the heat through the helmet, I was concerned about burning out the phone’s processor. Word to the wise: Give your phone a break after 20 minutes.

Jedi Challenges is also an individual game. There are no multiplayer options and it doesn’t make for a good spectator sport too — unless you enjoy seeing your friends slash at the air like a crazed piñata maniac. The action is mirrored on the lens so you see what the player sees by peering intently into the peepers of the headset. You can shout encouragements and advice to your friends but it gets old really fast.

The Star Wars: Jedi Challenges may not the ideal gift for gamers but it is definitely a must-have for fans. The sticker price may still be a huge hurdle to overcome but the movie-accurate lightsaber softens the blow by a lot.

I do not have a Master Replica Anakin Skywalker lightsaber, but compared to the Darth Vader replica, which is also heavily chromed, the Lenovo’s lightsaber hilt is a lot less fingerprint hungry. When the set is not in play, it can sit in any display case/shelf/vault without being out of place.

Lenovo did a great job with the graphics and the AR is truly immersive but to limit the system to just one franchise seems pretty short-sighted. At S$379, there are other games such as Star Wars Battlefront II, that may provide better gameplay or, for an immersive Virtual Reality gaming experience, give Zero Latency Singapore a shot.

Gameplay is too repetitive for it to stick with hardcore gamers but Star Wars fans and collectors should shell out for this beautiful set.