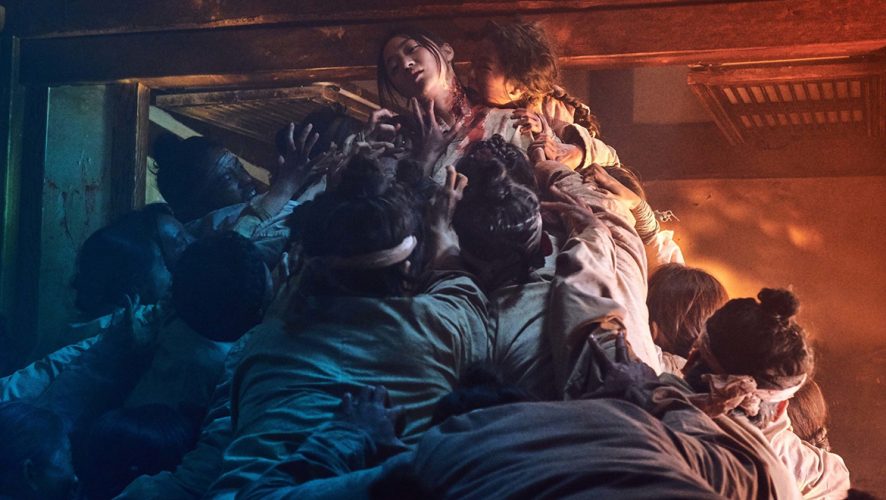 While Hollywood seems bent on updating horror creatures for a modern, or even futuristic setting, South Korean cinema is looking back in time, as it takes the undead back into the past.

Last year saw the release of Rampant, a period retelling of a kingdom swarmed by the undead and now, Netflix has released Kingdom, its take on a modern monster, placed in ancient feudal Korea, in the Joseon period. 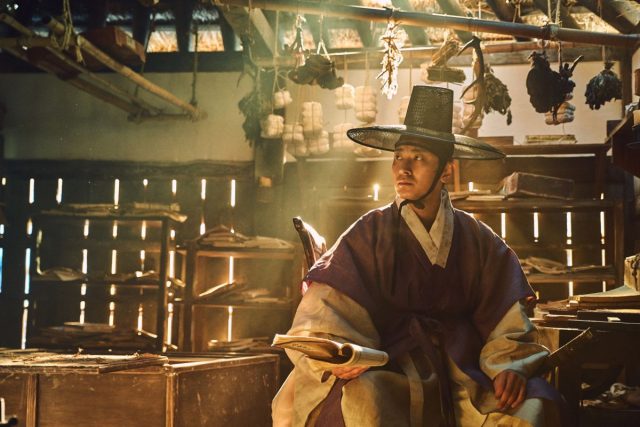 With his kingdom plagued by corruption and famine, Crown Prince Lee Chang (Ju Ji Hoon) sets out on a journey to find a cure for his father’s illness, only to uncover a zombie epidemic that is sweeping his nation by force. He also has to defend himself against the politics of the palace, as the opportunistic Prime Minister Cho Hak Ju (Ryu Seung Ryung) — and father to the Queen (Kim Hye Jun) — is determined to seize power by any means necessary.

Written by Kim Eun Hee (Signal, Three Days) and directed by Kim Seong-hun (The Tunnel, A Hard Day), Kingdom closely follows Lee Chang and his loyal bodyguard Mu Yeong (Kim Sang Ho), as they travel around the lands to find a cure for the illness afflicting the emperor. While we are not privy to scenes between Chang and the emperor, flashbacks show his unwavering loyalty and piety to his father.

But while it is evident that Chang holds the emperor in high regard, audiences will recognise that the emperor is not quite one of the living anymore, and the look of horror on the prince’s face as he slowly comes to that realisation is painful to watch. 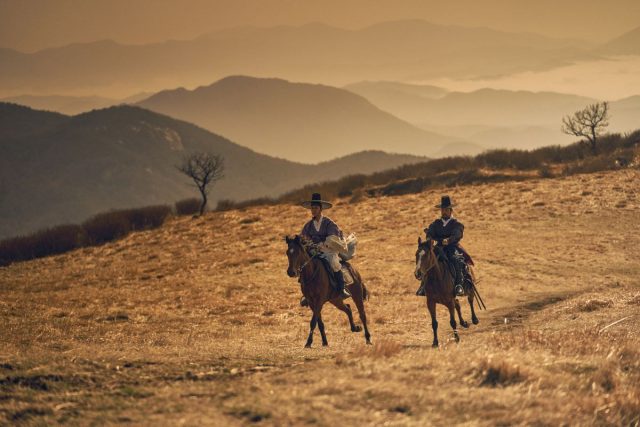 Unlike many Korean dramas, this is not a 20 or 30 episode mega series. Instead, the story unfolds across six episodes, much like an epic movie. Nevertheless, there is enough time to watch the characters grow. The banter between the Crown Prince and his bodyguard helps to lighten the mood in the first few episodes, but as the tone gradually gets heavier over the course of the series, the banter slowly disappears.

Which is a pity as the show could afford to have a note of levity, since almost everything else feels heavy and serious. However, the loss of quips is understandable as you watch Lee Chang grow on his journey. At the start, the prince, while stoic and serious, is still a spoiled prince from the palace who, according to Mu Yeong, has trouble travelling. But by episode six, he is covered in blood and dishevelled from battling his way through hordes and hordes of zombies. Definitely not Crown Prince-like. 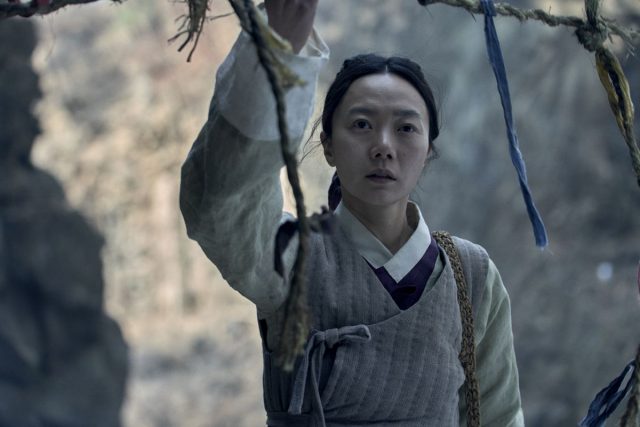 The series also has other likeable characters, such as Seo Bi (Bae Doona), a physician who was present when the zombie epidemic first broke out. This all-too-serious physician feels extreme guilt for what happened and is trying her best to find a cure for the zombie outbreak. Several humorous scenes also come from Seo-bi being too dense to recognise Dongnae’s Magistrate Cho Beom Pal making advances at her.

Along the way, Chang recruits several allies to help him on his journey, such as the sharpshooter Young Shin (Kim Sung Kyu). as well as Lord Ahn Hyeon (Heo Jun Ho), a highly revered general, who also happens to be someone Chang is all too familiar with.

These characters would be highly likeable if not for the looming threat of a zombie epidemic where anyone could die (The Walking Dead anyone?), which ensures you do not get too emotionally invested in anyone. Save the Crown Prince, of course, thanks to his plot armour. 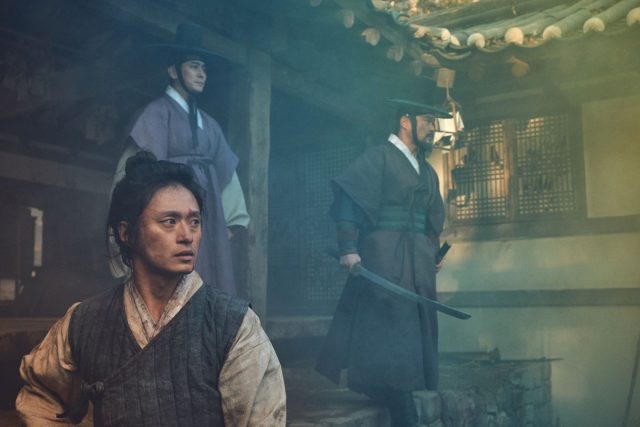 More often than not, when in a zombie apocalypse, you would usually be chased by slow, lumbering ones right? You know, the kind that just ambles along slowly, arms outstretched, groaning incessantly for brains.

Well, the zombies in Kingdom are anything but slow. They run incredibly fast, and seem to have great stamina for reanimated corpses, chasing their prey relentlessly till they succeed in catching him or till the human manages to get to a safe zone. While terrifying, these zombies make for great chase scenes when any of the main characters are involved, leaving you to hold your breath right till the end.

Where the series falters, however, is during its fight scenes, especially the one between Chang and Commander Cho. Filled with too many cuts, the fight feels messy and somewhat disjointed. It would have benefited from some long takes with well-choreographed sword fights.

Another issue is that apart from the Crown Prince, we never really spend enough time with the other characters to know more about them beyond what is shown to us from the start, or told to us directly. We can only hope that the second season will help to rectify that. 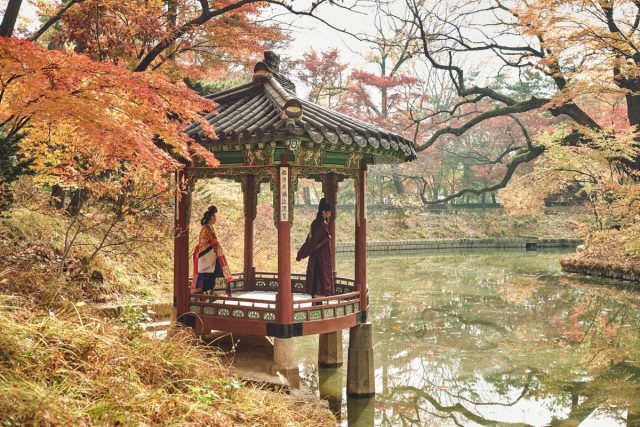 Director King Seong-hun’s film expertise is evident throughout the drama, with several cinematic shots of Korea that are beautifully framed, from the valleys to the palace gardens. Even scenes featuring human subjects deserve praise, particularly an early moment in episode one where the Crown Prince kneels all alone in a distant shot, which only emphasises his loneliness in the palace despite his position.

Overall, Kingdom is a great period zombie drama that brings something new to the zombie genre. The series is filled with great acting and gorgeous shots. There are intense chase scenes that keep you on the edge of your seats and has enough sentimentality to tug at your heartstrings. While it is by no means perfect, Kingdom is definitely still worth a watch. Plus it has a cliffhanger that will have you wishing for the second season to be here already.

A second season has already been confirmed by Netflix, with Kim Eun Hee back as a writer for the series. Production should start in February 2019 and if you cannot wait, the series is actually based on a webtoon titled Burning Hell Shinui Nara, otherwise known as The Kingdom of the Gods, also written by Kim Eun Hee and illustrated by Yang Kyung Il.

Kingdom, an exciting zombie period drama that will have you reaching for your running shoes to exercise more just in case you find yourself having to escape from zombies that can actually run.