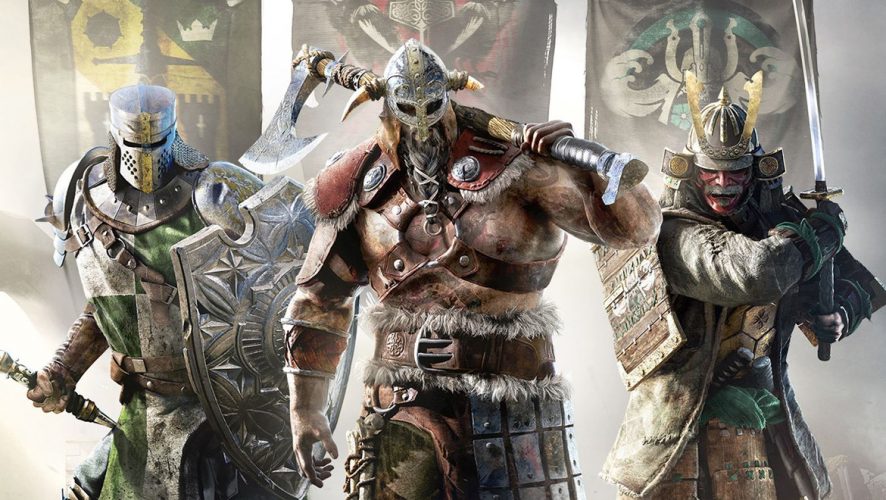 Gamers checking out For Honor may be forgiven for thinking it’s an action game.

The premise of Vikings, Knights and Samurai ridiculously battling it out over patches of land in swords-and-steel clanging action looks superficially like a fast game. And you’d be forgiven for thinking so if all you do is watch Twitch videos or the game’s trailer.

But Ubisoft’s For Honor is much more than that, and it’s closer for us to call it a Street Fighter rather than a Dynasty Warriors game of slow deliberation masked by quick and merciless death.

Duel to the death

For Honor’s “Art of War” battle system’s core is simple to explain; you have a light and heavy attack, and three angles (left, right and top) to block and deflect an enemy attack. In guard mode, once you’ve locked on an enemy (tip: turn on tap to guard, your fingers will thank you), just swing away until the other guy or you flops over. 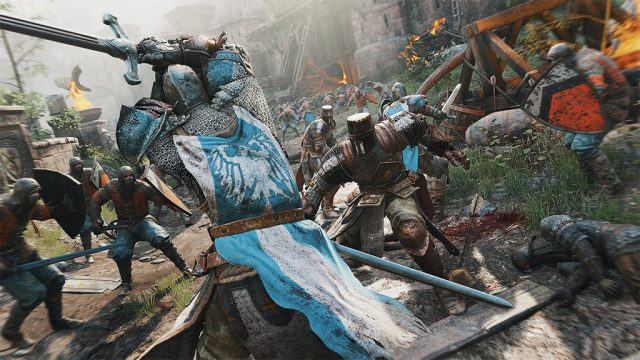 When combat is joined between two players, you zoom in to some serious mind games. Besides the light and heavy attack, you’ve got options to thrust a guard break, throws, feints, ways to combo a swing into a set of uninterruptable attacks, environmental considerations (throw your enemy into a wall and he’ll be momentarily stunned) and lastly, a stamina system so you can’t just keep wailing away.

Adding on to this, each of the three factions has a spread of four heroes, such as the Samurai’s Kensei, Shugoki, Orochi and Nobushi. The 12 heroes are either an average, heavy, light or hybrid unit respectively. Each have their own unique abilities and combos, and even the same form of unit, say the Orochi versus the Viking’s Berzerkers, play very differently from each other.

This results in an extremely deep combat system – the game absolutely punishes players who rush into combat but rewards those who slows down to think and plan. Players who position carefully, feint and change guard stances to try to draw out the enemy or suddenly dive in for an attack will be on the winning end.

Oh, and if you’re playing this on PC, bring a controller. Without it you’ll almost certainly be a free meal online.

A story shorter than a chop shop

For Honor’s shallow plot is a glorified multiplayer tutorial. Somewhere in the plot there’s talk about re-starting the eternal war between the three factions, forgettable characters and… you know what, no one cares, we’re just here to fight. 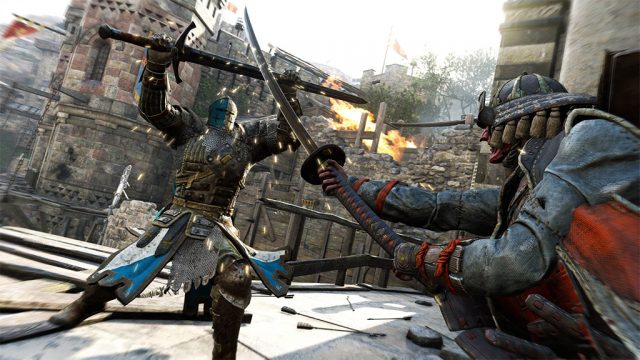 You should still play it though, going through all three factions in the six-to-eight hour “campaign”. The campaign gently eases players through every class and guides you through various mechanics you’ll face later online. While there are a few standout set pieces such as a fight with a pack of dogs and another with elephants, these are few and far between and give little reason to go back beyond trying to decipher the lore through “viewables” scattered throughout the maps.

For the glory of our kingdom!

Multiplayer, then, is the meat and potatoes. There’s the one-on-one Duel, two-on-two Brawl, and four-on-four fights of a points-based Dominion mode, Skirmish mode and finally Elimination. Over our time spent with the game, it’s clear that the best types of fighting goes on in Duel or Brawl, where the purity of For Honor’s fighting system gets to stretch its legs.

This is largely due to the unfortunate snowball effect of larger team-fight modes. While team mates can be revived if they’re finished off normally, smart players use final execution attacks to ensure enemies stay dead – allowing for two-on-one, and even three-on-one fights against a beleaguered final player. More often than not, larger fights devolve into who gets the first kill and snowballs from there.

Yes, it’s possible to win fights against more than one player with the use of “Revenge mode” – a kind of rage mechanic where you’ll get increased attack, defense and shielding for a short period of time – and the ballet of deftly deflecting another enemy through a quick switch. But given how fights go, we’re seeing more players drop out of the game once they’ve been finished off and know the fight’s over. 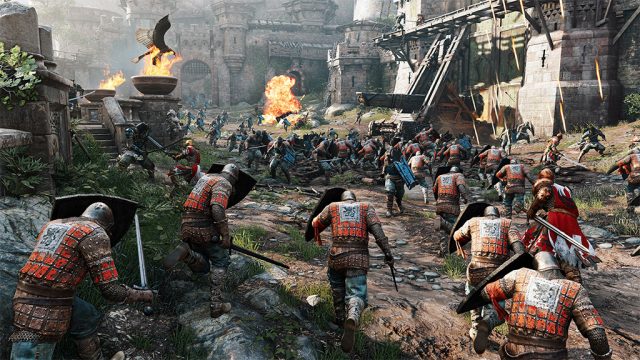 Don’t let this put you off though, as when it’s a pure mano-a-mano fight the game sharpens your senses like the best fighting games could. Do I feint? Wait for the parry? Is his stance an indication he’s going to feint left instead? Maybe I should do a guard break. Is that environmental hazard close enough that I can maneuver my enemy towards it and do a throw? While AI bots do a fair attempt, For Honor’s fighting shines best online when the mind games come out.

Additionally, there’s a minor metagame going on in the background of all this that plays out post-match. A global map of territories shows every faction’s push-and-pull (and, in a neat touch, even AI-games can count towards this) for territory. Win or lose, you’ll earn some war supply points which you can contribute to the areas of the map. Sure, it might not feel like your contributions do much, it does help to add a bit of faction pride and sense of urgency to prod players towards certain modes to help shore up defenses or aid in a push. At the end of the season, points get tallied and rewards doled out for the top faction.

So far, the game’s servers have largely held up. While there are some times when players have disconnected mid-match if you join mid-way through, the server will keep you in the same lobby to keep playing the next round. This is great, since menu navigation can be tough, with odd UI choices especially prevalent in the multiplayer sections.

We’d be remiss if we didn’t mention the upgrade system. Every character in the game can gain gear – one or two dropping per match – to equip across a wide part of their character. The longsword, for instance, has options for the blade, hilt, and guard.

You can buy war chests of more random items in the game for in-game “steel” currency, and at first glance this is where For Honor falls flat. You’ll earn paltry amounts of steel through matches even when you win, and while there are missions to help pad that out, it costs anywhere from 300 steel and up. This seems inclined to push players to the microtransaction store, where you can cough up real cash for a pile of steel to open chests.

Fortunately, if you’re not inclined to open your wallet further, this seems largely unnecessary. While top-tier gear looks amazingly sexy, the normal gear is sufficient for most fights. In general, the equipment is intended to further tweak characters for an added advantage, but with drawbacks to balance the equation. I’ve had a plate armour chest piece, for instance, which adds significant damage reduction at the cost of massively reduced sprint speeds. This works great on my lumbering Conqueror hero, who lumbers slowly with his shield out before responding with a massive attack. 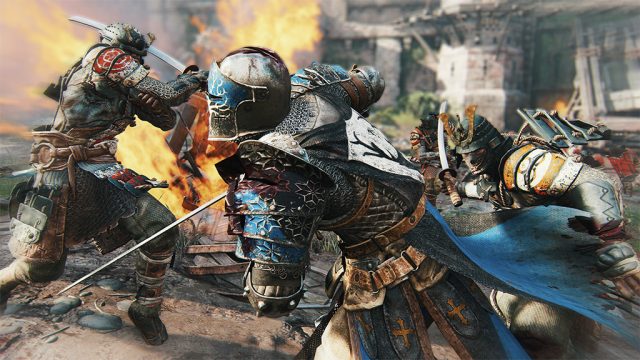 It’s a shame that you’ll also need to spend money to “unlock” more heroes. While you can play every single class right from the gate, if you really like the Valkyrie class, for instance, you’ll need to spend some of that sweet sweet steel coins to “unlock” the option to have their abilities, feats and equipment customized. This feels nonsensical – as if I’d paid for a full-priced game only to be told that the price of entry lets me sip at the pina colada but not get a full drink.

For Honor is at its core an amazing game. Fights to the death are furious, tense sequences that are perfectly executed. Does that make up for odd choices in the microtransaction store, some odd UI choices and a lackluster single player? Perhaps. Our main concern is the longevity of the title, because drilling down into the battle system will probably take weeks or months of work, leaving potential fresh blood out of the pool in future.

Still, if you’re in the market for a burly, deep fighting game, For Honor has your back covered.

Big swords, big armour and fast fights make up the best bits of For Honor.