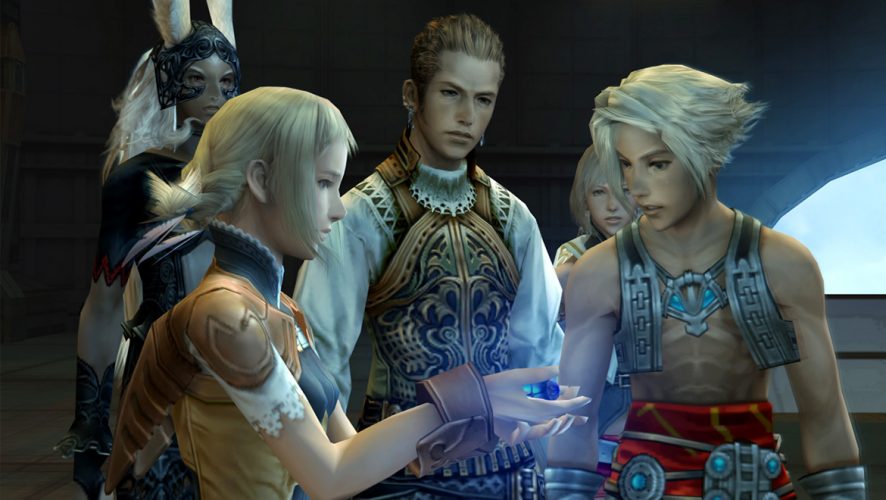 Square Enix brings back the Final Fantasy game that was such a departure for the series, many people said it wasn’t even really Final Fantasy anymore. Which makes no sense in a series that is constantly reinventing itself.

The first thing you’ll likely notice about Final Fantasy XII is that you’ve probably been here before. Its setting of Ivalice had appeared in two games before showing up here, in Final Fantasy Tactics and Vagrant Story, original director Yasumi Matsuno’s previous games. This meant that instead of an entirely new world like the Planet of FFVII or Spira of FFX, players were welcomed back to a world they had previously visited, albeit in its future.

This Ivalice is a ridiculously large area full of every kind of terrain you could think of, from the deserts of the Dalmascan Estersand and Westersand, the snowy cliffs of Mt. Bur-Omisace, the sweltering undergrowth of the Golmore Jungle, and the beautiful beaches of the Phon Coast. Each area is large and expansive (occasionally, too expansive), and features plenty of opportunities to level up your six main characters. The monsters are well designed (even if many of them are copies of each other with new paint jobs), especially the bosses. I personally love the design of Tiamat and the Elder Wyrm. 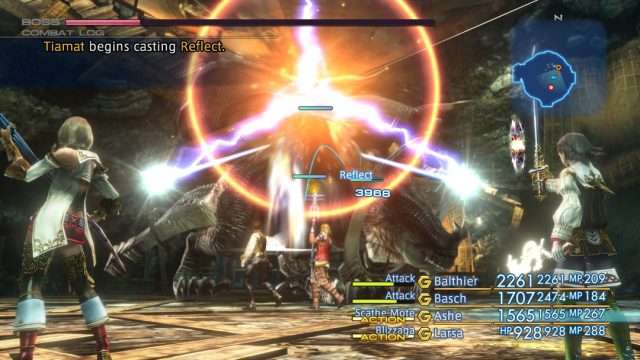 The Judges are also super well designed, with their amazing armour and helmets, along with the Garif, who also have some awesome headgear. The Viera, however, should have been given much better clothing and armour than the lingerie they are forced to wear. Fran spends the entire game in the skimpiest of clothing and heels. I mean, come on. This is my one gripe with the design in this game (that, and the weird half armour the Dalmascan forces wear in the opening cinematic; seriously, your nipples are going to get cut off right after you’re stabbed through your unprotected abdomen).

The story has been compared to Star Wars, and I can certainly see why. From a rebellious princess and smartass smuggler/pirate with an alien co-pilot, to a floating city in the sky with a leader who seemingly betrays you and a warmongering empire looking to subjugate the entire population, there are plenty of similarities. But that’s all they are, similarities. FFXII is more like a political thriller with moogles and chocobos than a space opera, with scheming princes and senators, secret political meetings, and a princess attempting to prove her lineage to avert all-out war. Of course, because it’s a Final Fantasy story, there’s also some weird stuff about crystals and the universe ending, but other than that, totally a political thriller.

I like the pared down character list because everyone has a good reason to go on this quest. Well, everyone except Vaan and Penelo, who both happened to be in the wrong place at the wrong time and are clearly the comedic relief, even though Vaan is pitched as the main character (Balthier is having none of that, however, calling himself the “leading man” on multiple occasions). But it’s still better than Final Fantasy VII or Final Fantasy IX, where we kept picking up every Cait Sith, Quina, and Vincent with the flimsiest of pretexts to join our crusade. Just stay home, guys. It’s cool, we can do this without you.

With Each Passing Day, the World Finds New and Exciting Ways to Kill a Man

Final Fantasy XII is the first Final Fantasy game that had no transitions between the main screen of play and the battle screen. There are no random encounters, as you can see most of the monsters in your vicinity, and decide if you want to engage them or go around them (or, occasionally, flee past them). When you do engage in battle, however, it’s a beautiful meld of real-time and turn-based action. FFXII uses the Active Dimension Battle, an update of FFX’s Conditional Turn-Based Battle, in which characters and monsters’ speeds decide who goes first, and how many hits they get. 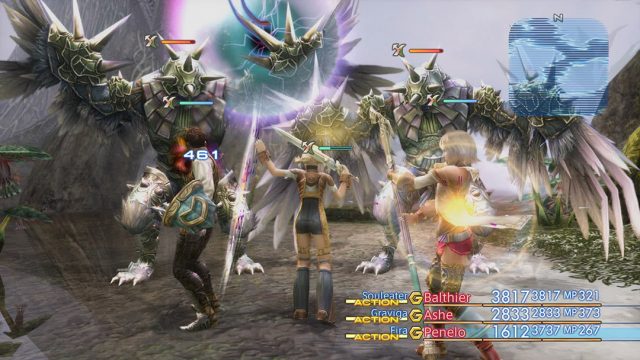 Making this even better is the amazing Gambit System. This is basically a collection of if-then statements that you can program all the characters with. For example, whoever your white mage is can be programmed with the Gambit “Ally: HP < 30% >> Cure”, which means if any of your allies have less than 30% of their total hit points, the white mage will cast Cure on them. These conditional statements can be sorted by precedence (Penelo should heal herself before she heals the others), individually turned on or off (maybe I don’t want Balthier to steal anything for the next few encounters), or changed entirely (Ashe should cast Thundara only on creatures that are weak to lightning instead of on any creature with 100% HP). You can also choose the characters’ actions on the fly using a traditional menu system, which will always take precedence over the Gambits you’ve set up.

I truly love the Gambit System. It is a beautiful piece of design that lets me zone out a bit during the more tedious bit of JRPGs – the grinding. And thanks to The Zodiac Age’s option to speed up the game (more on this later), grinding is even easier. I can basically let the game play itself, with only a minimum of input from me. And if you think that’s some kind of JRPG heresy, then you haven’t played enough JRPGs. I would love for every JRPG to have a Gambit System of some kind. Heck, I’d love it if some western RPGs had one too.

The targets in Gambit equations can be purchased in shops, along with weapons, armour, accessories, technicks, and magic. Unlike Gambits, however, the other stuff can’t be used immediately. You need to map out the License Boards for that. Every job has its own License Board where you can buy ever-increasing levels of weapons, armour, accessories, technicks, and magic, as well as boosts to physical and magical damage, higher HP and MP, and boosts to speed. The License Boards are a huge step up from FFX’s Sphere Grid, which was simply too large and unwieldy. 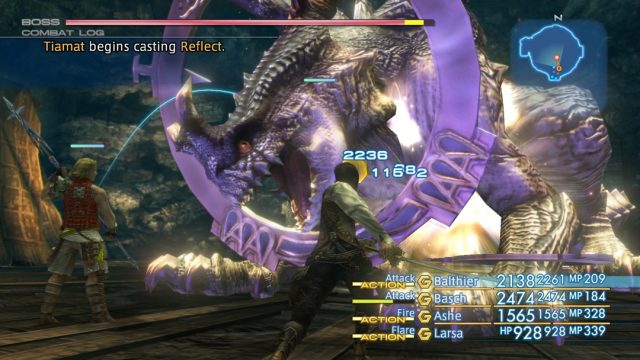 You can unlock different squares in the License Boards using License Points that you acquire from beating monsters. And unlike XP, all your characters received LP from defeating monsters, even if they’re not in your active party. I’m actually not a fan of this at all, as this means I have to grind twice as often just to get everyone up to the same level. Monster Hunts, which you can take by visiting various bars in various towns, are a quick and easy way to grind while also completing an actual objective. However, you will have to revisit many places you’ve already been to, but thanks to the Teleport Crystals scattered around Ivalice, you can get around fairly easily, provided you have enough Teleport Stones to use them.

What is Done, is Done

While I never played the Final Fantasy XII when it first came out, The Zodiac Age nevertheless improves on many aspects of the original 2006 release, including the graphics and the music. The graphics were given a quick polish to remove the jaggedness and blockiness of the PS2. I’ve seen videos comparing the two, and you’ll be happy to know that Vaan isn’t wearing super fake abs anymore.

Composer Hitoshi Sakimoto’s excellent score was re-recorded for TZA, giving some already grand music an even grander feeling. You can switch back and forth between the original recordings and re-recordings, but honestly, why would you want to?

The License Boards are tied to specific jobs in TZA as opposed to giving every character the same board, and each character can take up to two jobs. For example, my Fran started out as an Archer and then became a Red Battlemage as well, giving her two License Boards to play around in. You can choose whatever jobs you want for the six characters (including making them all the same thing, if you’re trying to prove a point of some kind), but I went somewhat canonical with initial choices, then went nuts with my second choices. 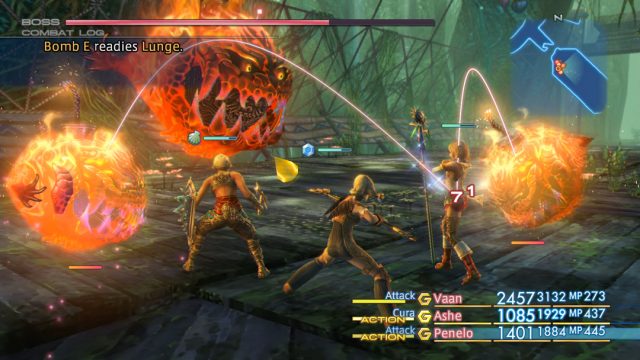 The aforementioned ability to speed up the game at your discretion (at double or quadruple time) is a new addition as well, making the more tedious aspects of the game whizz by at super speed. Best of all, the soundtrack doesn’t speed up, so you can keep listening to the amazing music as you speed run through Ivalice.

And finally, TZA includes a Trial Mode, in which you can face off against 100 rounds of ever more difficult monsters and bosses using the set of characters you’ve levelled up in the main game. You can save your progress every ten rounds, but you might have to do it over again if you progress in the main game as the two are linked. The Trial Mode was designed so that it would be impossible to beat using the same set of Gambits throughout the rounds, forcing players to think more tactically to get ahead.

Final Fantasy XII is easily one of my favourite entries in the series. It is a fantastically designed game from top to bottom (with the exception of some wardrobe choices), and The Zodiac Age only makes everything look and play even better. I’m almost happy I didn’t play this when it first came out, as I now get to experience it for the first time in an even better package.

Final Fanasy XII: The Zodiac Age is a fantastic update of one of the best Final Fantasy games I’ve ever played. It’s certainly much better than Final Fantasy XV, and Vaan is nowhere near as obnoxious as Prompto.