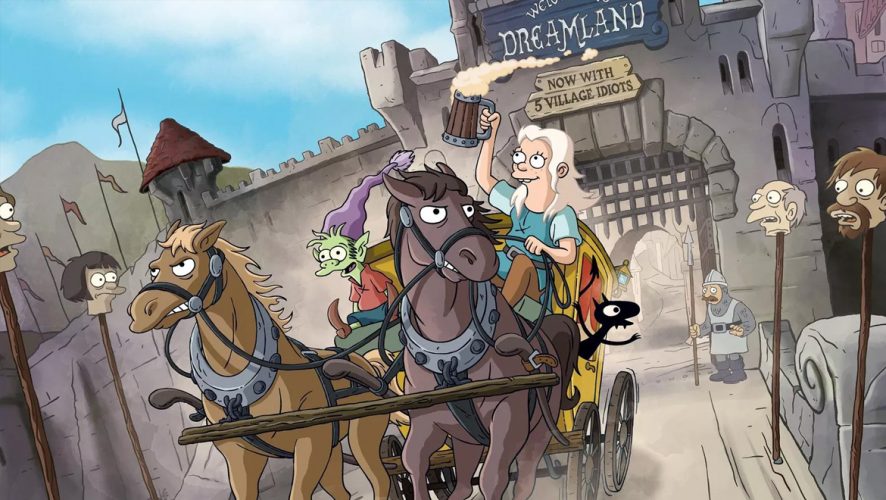 There are simply too many hours of content to be consumed these days, and slowly and surely, audiences are beginning to discover that not all creators are at the level of Spielberg or Cameron, where almost everything they touch is gold. If you’re looking for the latest animated fix from Matt Groening, the creator of The Simpsons and Futurama, be prepared to chug it down with a generous helping of salt.

Disenchantment is a 10-episode Netflix original fantasy-adventure animated parody series about a princess who is out to subvert her own fairy tale story. Along for her journey is Elfo, an overly cheery elf, and Luci, an adorable talking Demon. 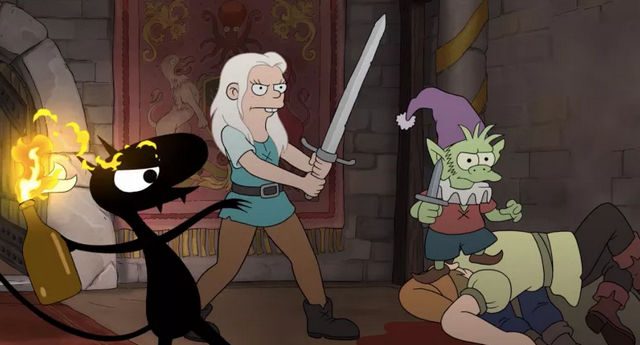 Princess Tiabeanie Mariabeanie De La Rochambeaux Drunkowitz, aka Bean, is a crass, party girl out to hook up with any handsome Viking she can get her hands on. Oh and she’ll take a tankard of ale with that too. Bean starts off as an interesting character but ultimately flat lines as the series goes on. Her character doesn’t develop so much as snowballs downhill into an endearing, but stereotypical rebellious princess. But fortunately, or rather, because she is the heroine, she has some lovable sidekicks to help drive her story.

Elfo is essentially Fry in a tiny package – weirdly optimistic, blissfully ignorant yet strangely insightful. He has a painfully obvious crush on Bean, which results in a handful of hilarious but cliche “misunderstandings”.

The third of their no-good party is Luci, a demon emissary sent from an unknown kingdom to corrupt Bean. Luci is probably the most underused character in the show. He can apparate, possess Bean, shapeshift and flirt with shadows. But he’s mostly relegated to snarky one-liners. Luci at times seems like a variation of Bender. Perhaps Bender vs. demon cat?

The rest of the cast play their parts as decent foils against Bean’s irresponsible ways. Especially Bean’s father, the overbearing King Zøg. Played by John Dimaggio, the king turns out to be hiding a great secret agenda that’s worth ploughing through the season for. Dimaggio’s Zøg is extremely lovable and his gruff tones capture Zøg’s Bean-caused angst with every frustrated yell. The father-daughter relationship is the central focus of the show, and DiMaggio’s chemistry with the affable Abby Jacobson (Bean) makes it relatable and endearing. 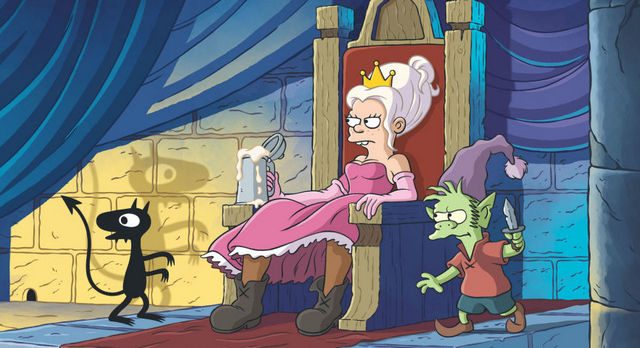 With The Simpsons currently the longest running animated series on TV, and there’s no denying that this brand of humour and animation has gone a bit stale. While it seemed like a breath of fresh air when Groening announced this new project, Disenchantment is like that youngest sibling that cannot live up it to it’s older brother and sisters. It has giant-sized shoes to fill – from Groenig’s own creations to the fantasy-adventure parody classic Discworld – and simply misses the mark.

As a parody of the adventure-fantasy genre, Disenchantment does not break any boundaries. The crude princess, hooker fairy, not evil stepmother and step-sibling, the misguided quests – it barely explores new ground with either the characters; or the story.

Still, the series is classic Groening. There are plenty of side jokes, some decent punchlines, iconic character designs and there is a heartwarming family story at its heart. The first two episodes are decent hooks to get you interested, but it takes a little determination to get through the season for the great twist revealed in the last two episodes. 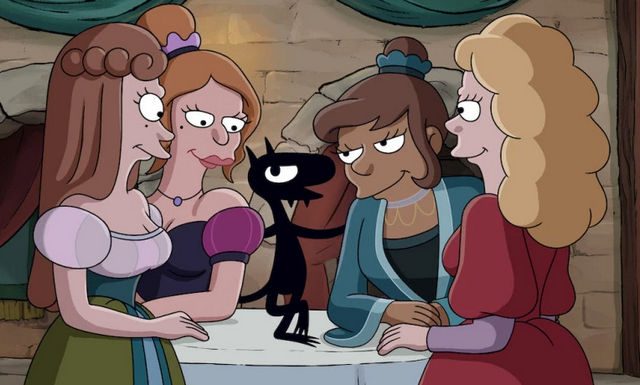 Between episodes 3 – 7, the show starts to feel formulaic. They’re really just all right and move the story forward but you won’t miss much if you skip through them. Which makes the story’s sudden left turn a little jarring and it feels almost as if it comes from nowhere.  The jokes can feel a little drawn out at times almost, as if the writers didn’t really know how else to fill the 20+ minutes runtime.

The series animation is one of the best things about it, as it’s smooth, colourful, dynamic and just pleasing to the eyes. It can seem a bit basic as it’s not a far stretch from what Groening fans are used to, but still a good effort.

The show is also filled with tons of Easter eggs which makes the flatter episodes more interesting.

While Disenchantment is by no means Groening’s most inspired work, it’s still an enjoyable series for casual viewing though it will leave long-time fans wanting more.

An enjoyable time waster made with a dash of pop culture, a teaspoon of The Simpsons and a good serving of Futurama.