“Give me your money!”

The world’s most successful mobile game has finally gotten a numbered sequel. Rovio has added enough new content and mechanics to warrant the hefty title, Angry Birds 2. However, all the good is lost because of the greedy in-app purchases that undermine the core Angry Birds gameplay experience.

There have been over a dozen Angry Birds games since the original’s release in 2009, these include standalone expansions, spin-offs, and a couple of tie-ins with Star Wars and Transformers. Even board games, fluffy toys and a clothing line appeared during the peak of the Angry Birds craze. 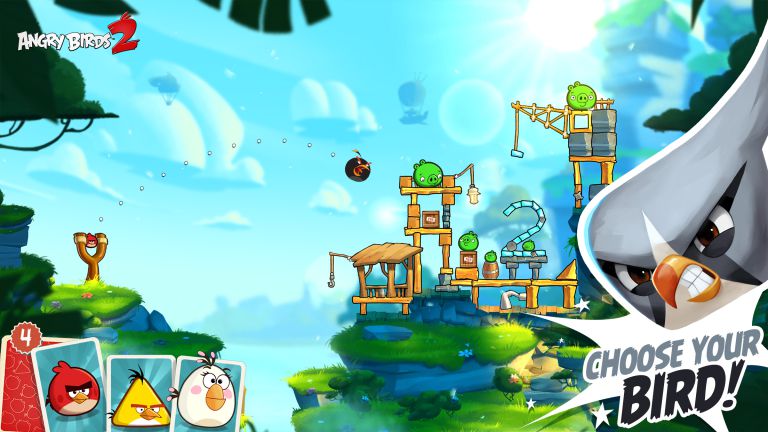 The concept of Angry Birds 2 is just the same as any other Angry Birds game. Pigs have (for a reason never explained in any of the games) have taken it upon themselves to steal eggs from the birds. You then need to retrieve the eggs by firing the adult birds from a slingshot into various structures that the pigs are hiding in.

As with all the other Angry Birds games you can beat most of the stages without any trouble but it does get harder later on. Each coloured bird has its own special ability such as egg bombs, dive bombing and splitting into multiple birds. At the start of each level you are given a random selection of cards based on the birds and spells you’ve unlocked. You can use them in any order you like, but once you have used them up and you didn’t manage to clear all the pigs you lose a life. Cards can be added to your deck by filling up the destruction meter or paying for them with dreaded in-app purchases. 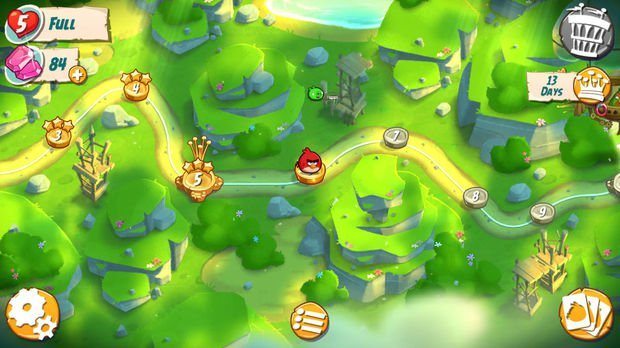 Angry Birds 2 looks fantastic. Leaps and bounds ahead of anything Rovio has done before and close to something you would expect on a console. The animations are smooth and silky and the environment designs are surprisingly detailed. Levels are now randomly generated so things stay fresh and each have multiple screens to them along with boss encounters. The new arena mode allows players to play through an endless succession of screens and try to rack up the highest score to compete with other players. Do well and you can rise up the different leagues that the game has to offer.

So where does it fall apart? The in-app purchase mechanic that Rovio has introduced is just awful. Angry Birds 2 has introduced a timer to the game. This goes against everything that Angry Birds was. You cannot quit the level and reply instantly now. If you give up and restart you lose a life. You have five lives and once you have used them up you have to wait around 30 minutes in order to get them back. Unless you pay. Then its ok.

It’s not much of an inconvenience at first, but once you start getting into the harder levels you barely have a chance to complete one or two at a time before running out of lives. With the levels having multiple sets of structures and screens, even if you fail right at the end you get slapped back to the beginning to try again. Very frustrating.

Angry Birds 2 is a solid game. It’s not very different from all the other iterations but there is no doubt that it’s a fun way to spend a few minutes on the train or bus. If only Rovio offered a premium version, as they have done before, that lets you purchase the game outright and avoid the terrible in-app purchases. But they don’t. It’s a terrible decision that rips one of the core mechanics out of the Angry Birds franchise.

Angry Birds 2 is available now on the App Store and Google Play Store for FREE.

Angry Birds returns with enough new ideas to warrant the ‘2’ in the title but throws it all away with awful in-app purchases and timers.