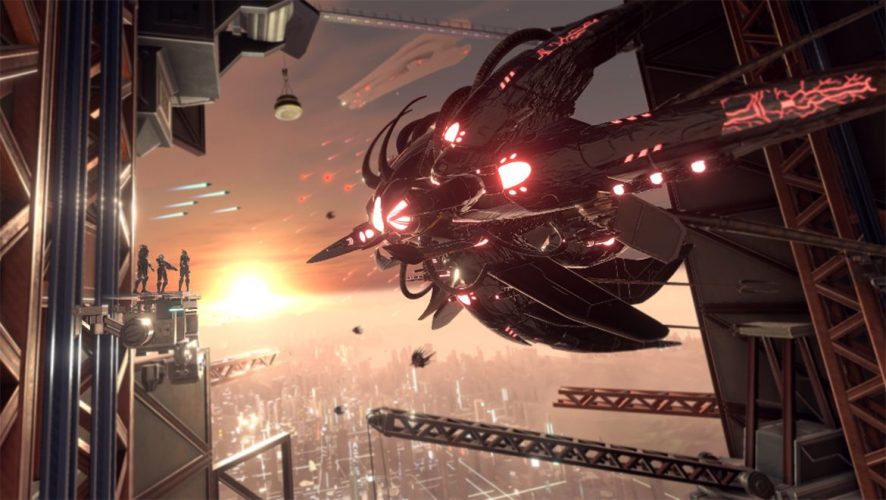 VR gaming has taken many strides over the past few years, but despite the advancement, it is still an experience exclusive to those who can afford it.

The folks over at Sandbox VR Singapore have curbed this notion, by promoting VR gaming to the public at affordable prices. Its current two titles – Deadwood Mansion and The Curse of Davy Jones – offer modern and pirate fantasy settings respectively, delivering quality brain-bashing and swashbuckling 30-minute experiences to great effect. And the third one is always the charm. 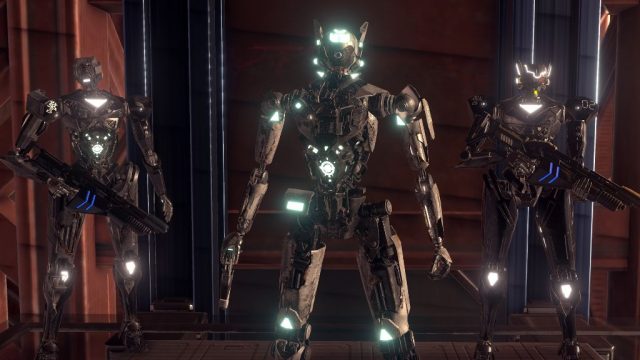 What better than to complete that triumvirate, with Amber Sky 2088?

Sandbox VR’s latest entry provides a futuristic sci-fi offering, which puts you and up to five other friends (4 is our recommended minimum!)  in the shoes of a squad of androids in the dystopian setting of New Hong Kong. You’ll be fighting off in a desperate last stand on Earth, against hordes of the necromorph-like Rancor, who come at you relentlessly with their mantis-like appendages, serrated teeth, and basically, the many other nasty things invasive alien species possess.

Thankfully, though, you’ll be adequately equipped with blasters and flamethrowers to pump some plasma into their ugly faces (or thoraxes, for the faceless ones).

Unlike the previous two entries, Amber Sky 2088 provides you with two main classes to choose among yourselves: the Attackers, who uses an energy rifle for long-range strikes, and a flamethrower for some close-range lovin’, or the Defenders, who use a pistol for some mid-range combat and a shield to ward off incoming projectiles (P.S.: it can be thrown Captain America-style to deal some ranged area damage to your foes, so that’s another plus!).

After a short briefing and suiting up, the thirty-something minutes are all yours, so you have to make it count. You and your teammates will be hunkering down in a vertical ride up to space in Earth’s last space elevator. 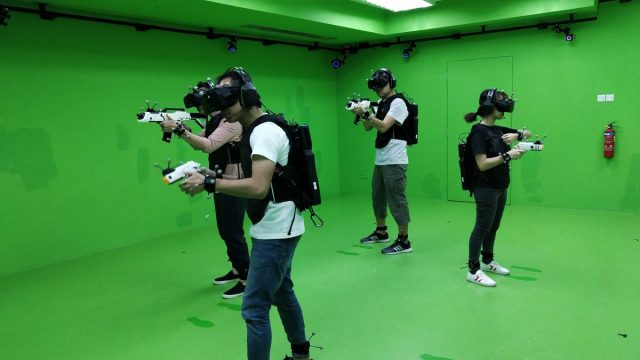 In typical Time Crisis fashion, the Rancor will appear in all directions as you shoot away, with every few minutes becoming a progressively harder and more gruelling battle of attrition. It’s not too overwhelming, such that you and your team can’t handle, of course but players will take damage during your stint in Amber Sky, and you might see your health get depleted if you go all Rambo in this.

Not to worry though, as a tap on the shoulder by a friend will revive you! 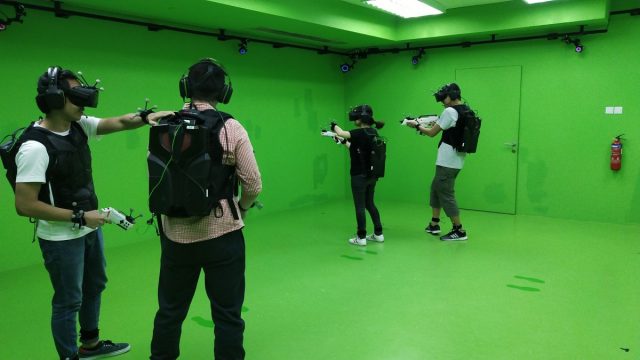 The enemy types are varied enough to provide everyone with enough of a challenge. You have your standard shocktrooper-type Rancor, which are pretty manageable individually, but can be quite a nuisance if not dealt with immediately. There are also your swarm-types that can deplete your health pretty quickly, if you don’t burn them down with the flamethrower. 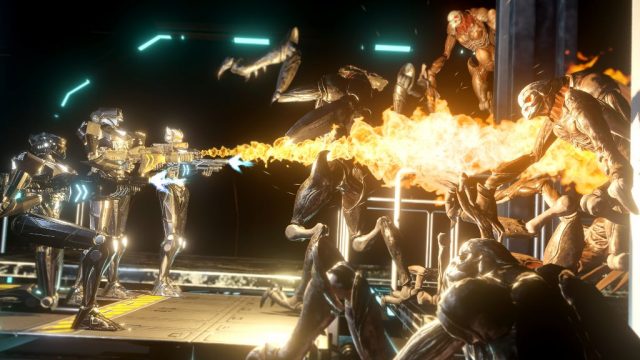 There are also artillery-types that fling acid bombs at your group (shields help a lot in this case), and Queen Rancors – the presumed boss-types in the game – that not only blast you with numerous energy cannons, but also fling eggs at the group, which, if not destroyed right away, hatch into some facehugger-type creatures that latch onto your bodies and sap away at your health. Bitch!

Despite this variety of enemy types, though, the game somehow feels a little too… easy.

Sure, it gets a little hectic after a couple of minutes, but it’s not to the point where everyone is screaming and flailing about fervently. If the Rancors were a little more aggressive, then maybe you’d have a more proper fight on your hands. 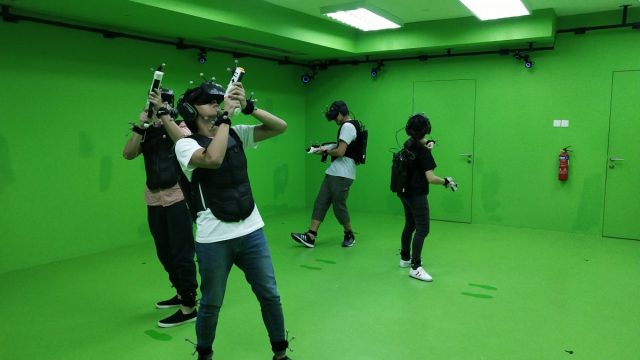 As you slog away with your friends, a thumping synth rhythm accompanies you to great effect, heightening the immersion level and injecting some much-needed adrenaline in your veins in this visceral (geddit, Dead Space fans?) elevator ride.

Sounds of alarms can be heard in all directions, as well as the screeching of the Rancor as they burst through walls at any given time. However, with all this aural mess happening, the headsets you’re equipped with are unfortunately unable to take in everything at once, so you’ll have a hard time speaking to each other, especially when you need to communicate plans. 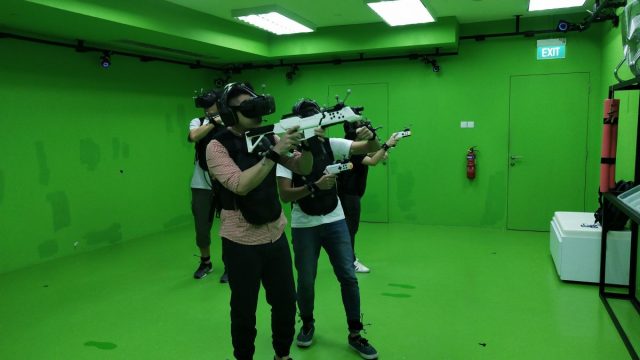 Another issue that might crop up during your play session will be sensitivity issues, mainly on the shields on Defenders. Because you’re flicking your arm around to launch your shields, your wrist straps might drop off. Best way to solve this is to tighten the straps before beginning the session, but even then it’ll still happen.

Once you’re done with your session of Amber Sky 2088, you’ll be able to view a highlight reel of your session on the Sandbox VR Facebook page, or sent to your phones or via email, as with all other Sandbox VR games.

A pretty decent souvenir that might make you and your friends chuckle with glee or grimace with embarrassment as you watch your exploits during the game.

The price point of at S$42 (US$30) per person is pretty decent, considering the heavy price tag on most personal-use VR sets come with these days, and this is inclusive of the video.

Overall, Amber Sky 2088 is an ultimately great attempt by Sandbox VR to provide a sci-fi experience for fans of franchises such as Alien (which also has a pretty cool VR game, by the way) and Dead Space, or just want to shoot something or throw a shield like a badass.

Despite some ergonomics issues and not being challenging enough at times, Amber Sky 2088 makes for a decent way to spend some time with your friends blasting away at aliens.