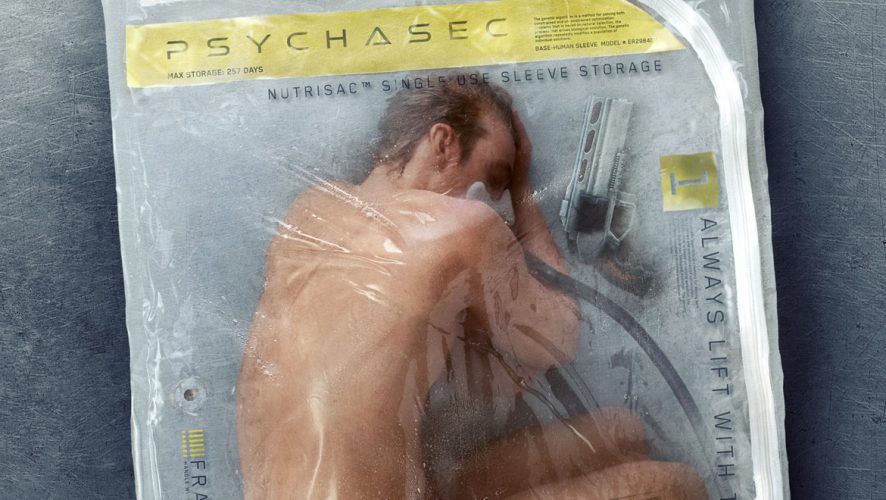 When it comes to sci-fi epics, there’s no denying that a few of them have been inspired by the penmanship of celebrated authors. Blade Runner is based on Philip K Dick’s Do Androids Dream of Electric Sheep, while I, Robot takes after Isaac Asimov’s short story collection of the same name. Meanwhile, The Martian was spawned off Andy Weir’s novel.

But if there’s one criticism, it is that much of the original book has been lost, after having to condensed so many pages within a 120 minute or less structure.

That’s where Netflix’s latest, Altered Carbon, comes in. Instead of trying to pack Richard K Morgan’s hardboiled cyberpunk sci-fi novel into a film, the content streaming service has opted to turn it into a season-long sci-fi series. The recent move by HBO to turn books into epic TV shows, including Game of Thrones and Westworld, has shown that audiences are ready for a gripping TV event that doesn’t dumb down, or simplifies details for the sake of the masses.

Starring Joel Kinnaman (RoboCop, Suicide Squad) as protagonist Takeshi Kovacs, the story follows his investigative journey as he awakens (or “spun up”) in a new body, known as a sleeve, complete with all of his original memories, otherwise known as cortical stack, intact. The slight twist? 250 years has passed after serving an extended prison sentence, but Kovacs isn’t a free man – the sole purpose of his release is to solve the murder a supposedly immortal man, Laurens Bancroft (James Purefoy, Hap and Leonard, Churchill).

In the dystopian world of Altered Carbon, the rich, or otherwise known as “Meths”, are able live forever by continually transferring their consciousness from one body to the next. As an insurance, in case something happens, they also keep back-up memories. For Bancroft’s case, dying before the 48-hour interval process means that his new sleeve has no memory of the event, which makes him suspect that foul play is involved.

Sounds complicated? It could well be, but much of sci-fi is the detailed world building, of crafting a whole new world, filled with a structure of its own. Coupled with a bunch of techno-jargon, attempting to understand the story here may prove to be quite the challenge, but there is a payoff. By the first three episodes, viewers should be able to familiarise themselves with these much, much like sleeving up to a whole new environment.

For all of its interesting premise and quirky concoction by mixing the noir, mystery, and sci-fi genres, not everyone will be immediately enamoured to Altered Carbon. Apart from the aforementioned deluge of tech-speak, showrunner Leata Kalogiris (Shutter Island, Terminator Genisys) has also dedicated the first half of the show to the craft of worldbuilding, which turns out to be a double-edged sword of sorts.

On one hand, it’s not a bad move as the meticulous breakdown of details provide deeper insights for audiences, allowing for easier understanding. On the other, it also means that the build-up to the main story is rather slow, and save for some blood-pumping action, the droll of character interactions and lore explanations can easily lapse into insipid moments.

The character portrayals in the initial episodes don’t do much to retain interest as well. As the sole survivor of the Envoys – a radical group looking to effectively end humanity’s artificial immortality –, Kovacs is weighed down by a lot of emotional baggage, and Kinnaman plays that role well with frightening proficiency. Much too well, in fact.

In the earlier episodes, his attempt to play up the ex-Envoy’s nonchalant and stoic personality backfires, simply because of its resulting compromise on the sense of connection between the characters and the audience. Kovacs comes across as unnecessarily snarky, a jerk, even, with a sharp mouth and even sharper wit to boot. His unflappable calm is a source of irritation, made worse by his uncaring attitude, and that’s where the sense of detachment stems from.

Detective Kristin Ortega (Martha Higareda, Borderland, Street Kings), who also makes her debut in the first episode, serves as a sort-of foil to the criminal element. Her dogged determination in chasing down Kovacs is admirable, but with a lack of rationale behind her actions makes Ortega come across as a tad overbearing and annoying at times.

It’s a relief, then, that everything starts picking up in the later half of the show and the characters get more depth. Audiences understand why Ortega is so obsessed in her field of work, and can start to empathise with Kovacs, for going through one heavy loss after another. The narrative forces audiences to become more forgiving of their flaws, and the focus on the side characters allow their stories and struggles to be further developed.

At the end of it, viewers are given slices of every character, borne from a group of eclectic individuals, which include the likes of Kovacs’ sister Reileen Kawahara (Dichen Lachman, Dollhouse, Agents of S.H.I.E.L.D), and the leader of the Envoys, Quellcrist Falconer (Renee Elise Goldsberry, The Good Wife). At times, some of them may be a little one-dimensional, but the consistency that it brings about borders more on comfortable than troublesome, especially since they are all developing characters.

If “bloodshed” and “flesh fest” are words to describe the first half of the show, then perhaps “bloodbath” and “flesh feast” would be more appropriate for the remaining part. The show pulls no punches when it comes to violence and nudity, to the point that Kinnaman’s butt can practically be the star in a supporting role based on its screen time. There’s a whole load of frontal nudity, alongside a gory spread of blown body parts, dismembered heads, and torn innards – shot usually in a morbidly artistic manner. It’s badassery all around.

Credit must be given where it’s due, and in the case of Altered Carbon, that would be its breathtaking visuals, and adrenaline-pumping action thrills. Every battle is extremely exhilarating; each vicious kick delivered with much tension in the air, a weapon thrust enough to keep one on their toes. When the crack of the last enemy skull is heard, a sigh of relief is in order, as is an immense sense of gratification. Coupled with the dreary, breathtaking neon-adorned landscape of Bay City, viewers will be in for a wild, wild ride.

Kalogiris’ attempt to explore various themes with the series is a brave, commendable one. It touches upon the core essence of the human identity and soul, bringing the dubious nature of cloning and immortality to the table. Sex and morality are especially of great significance, mainly because they represent the extent of one’s depraved impulses, which includes the murder of men, women, and children just for a sexual thrill.

The only gripe that comes out of it is Kalogiris’ handling of the topic on women objectification. With the repeated emphasis on strip clubs, seuxal assualt atrocities, and dead prostitutes, it feels rather clinical and overly in-your-face, so that may be a turn-off for some viewers.

The thematic exploration is a complementary element to Altered Carbon that would have performed better with a well-oiled storyline. Unfortunately, that isn’t quite the case, due to a combined consequence of lacklustre pacing and an overfocus on worldbuilding. While the plot does pick up towards the second half of the show, it also suffers from the rush at the end, skimping on many details, such as the relationship between various characters, and Kovacs’ thought process during the investigation.

When the truth behind Bancroft’s murder is finally unveiled, many questions are still left unanswered, all of which are along the lines of “How did Kovacs know that?”. The show has a tendency to justify Kovacs’ discoveries with his super Envoy instincts, and that essentially, is no answer to anything at all. There’s also hardly a sense of gratification from seeing Kovacs solve the mystery, because Bancroft is such a huge prick that it’s difficult to conjure some form of interest or pity for him.

On the bright side, at least Kovacs has his own pivotal episode, with actor Will Yun Lee (Bionic Woman, The Wolverine) pulling off an exceptional job of portraying the complicated character from 250 years ago.

And yes, the story twists are masterfully executed, and serve as a welcome respite to the story flaws. Awe is aplenty, truly.

Jam-packed with tons of action, beautiful visuals, dark humour, and the unapologetic portrayals of sex and violence, Altered Carbon makes for a highly-engrossing ride. It’s far from perfect, but the sci-fi title has definitely delivered the fine level of performance sought by Netflix, with an exceptional showing from the cast. Ultimately, there is a satisfying ending to complete the experience, tough the question remains –if there is no book sequel and the show covers the novel in its entirety, will there ever be a Season 2?

A solid first foray into the sci-fi genre, Netflix’s gamble has paid off handsomely with Altered Carbon, although it could have been developed further into something more, something even better – but that’s what a second season is for, I guess.