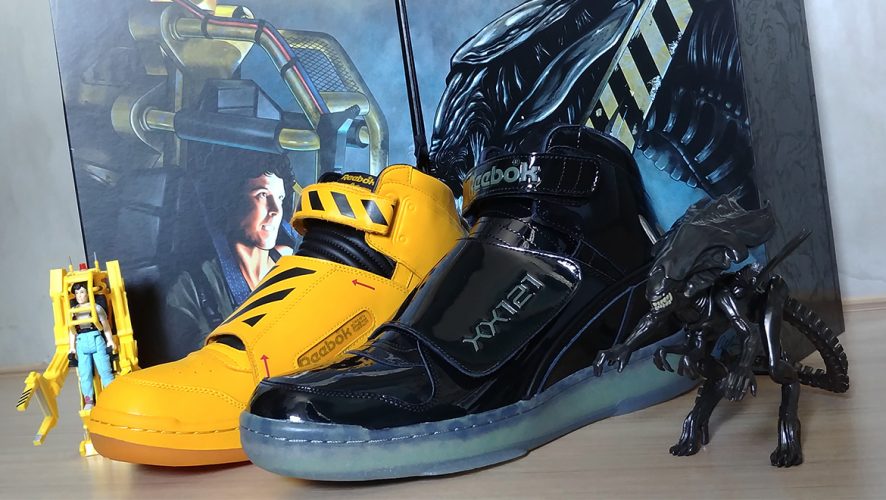 Released on July 18 in celebration of Alien Day 2017, the Reebok Alien Stomper “Final Battle” pack pays homage to the climactic, final battle from the Aliens movie (1986), pulling design details from the duel between Ripley (Sigourney Weaver) in her Power Loader, and the Xenomorph Alien Queen.

Some of you might be calling them 2 pairs of shoes, but these are so much more. From what we know, only 1,986 (how apt!) of these sets were made available globally, retailing for US$325. That’s about US$163 for a pair of shoes, which is reasonable for any Alien fan out there.

Luckily, I chanced upon a set locally, for a sweet price of a mere SGD$509. As far as I know, there are only a few pairs left in Singapore, so don’t scream if you can’t find them. No one can hear you.

I’m by no means a shoe expert or a shoe collector, so this review won’t be talking about the materials, the comfort the shoes provide, or any of the other finer details that usually come with footwear reviews. If you want those, there are other perfectly great shoes from Under Armour, Nike, Skechers, etc.

Instead, I will be talking about the various attention to detail put in by the designers, which drew an Alien geek such as myself to spend my money on two pairs at Reebok, no questions asked.

With a box like this, how can any crazed Alien fan resist the temptation?

Just look at the acid blood corroding the side of the box, and that shimmering Weyland-Yutani logo… 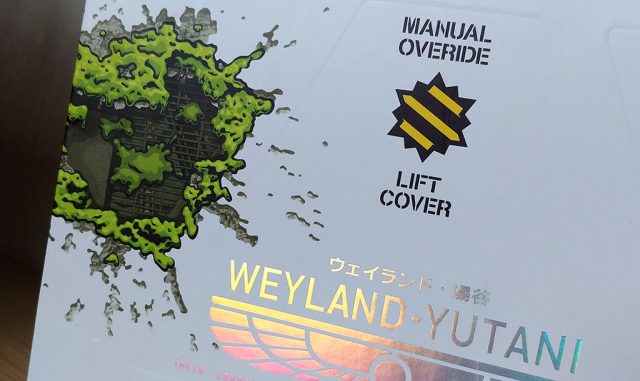 Even the shoe box surfaces are uniquely themed to match the shoes!

Upon flipping them open, behold, Ripley’s in her Power Loader, battling it out with the Queen Alien. Come to Papa you little bitch! 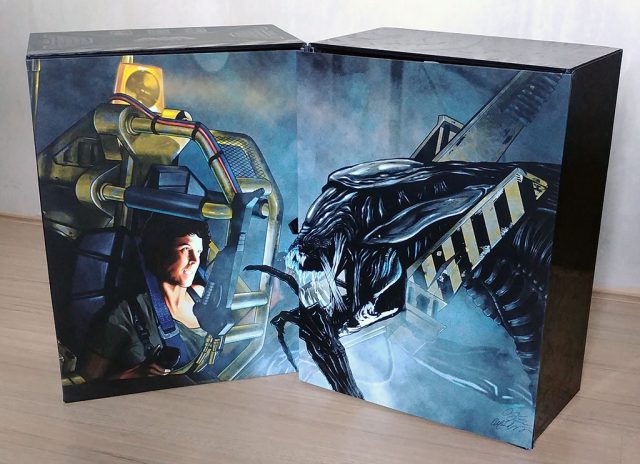 The theme continues with Ripley’s famous quote from the flick, as well as the dreaded Alien hiss. 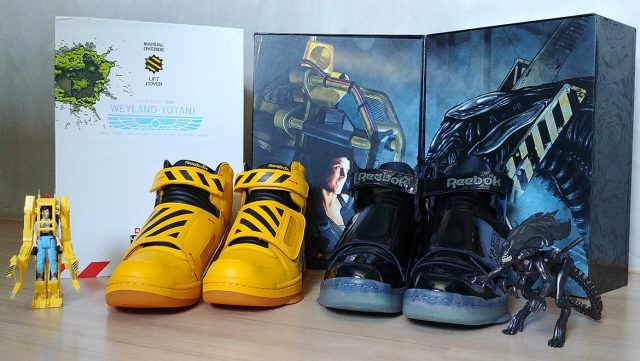 Just take a moment and marvel at the ensemble. The Funko Reaction Alien Queen and Ripley with Power Loader figurines are sold separately, and are a part of my geek trove of Alien collectibles.

As you can tell from the reference with Ripley in her Power Loader below, Reebok has done a mighty fine job keeping the Stomper to theme. These kicks are accurate down to the hazard stripe motifs, and even the black mesh ribbed overlay below the velcro straps, and on the insoles.

The workmanship and stitch work are top notch, so no complaints there. 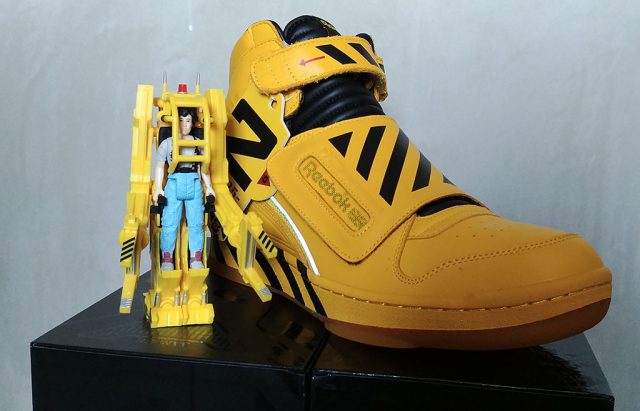 The back of the shoe is also labelled PWL, which stands for Power Work Loader, though it’s commonly referred to simply as the Power Loader. Did you know that the full name for the PWL is the Caterpillar P-5000 Work Loader? Ripley would be proud of these shoes.

And now, on to the Queen Alien Stomper. It’s made of a significantly stiffer, high-sheen black patent leather, and sports a translucent midsole. There’s quite a bit more features on this one, which Alien fans would appreciate. Apart from the “Reebok” logo on the top velcro strap, there’s also a “XX121” printed on the side, which represents the “Xenomorph” lifeform as we know and love.

And the best bit? Both logos glow-in-the-dark. 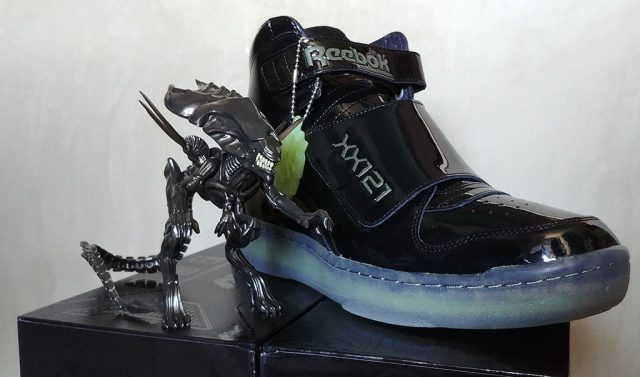 The attention to detail for this pair takes an extra notch above the Power Loader pair. Not only does it come with a nifty glow-in-the-dark rubber tag, with a Xeno head design on it, but each shoe even features a different insole design. The right insole sports a design of the Alien lifecycle, from egg to adult Xenomorph, while the left insole features acid blood melting through its base.

My favourite feature with this pair has got to be the glow-in-the-dark elements. Although the “Reebok” logo and “XX121” could use with a stronger glow, I was pleasantly surprised at the lower half of the shoe. Just look at how the lower side and soles glow in toxic green. Truth be told, the green here is actually more reminiscent of the Predator’s blood, because while acidic, the Alien’s blood is not luminescent.

But who cares when it looks this sweet??

Why two pairs? Well, you can wear them as a set, or pair their off! It’s a good thing that both pairs of shoes are kept at the same height and overall form, which makes for the perfect Ripley VS Alien Queen pair up on that special geeky occasion, like when visiting the next geek-con such as STGCC or GameStart!