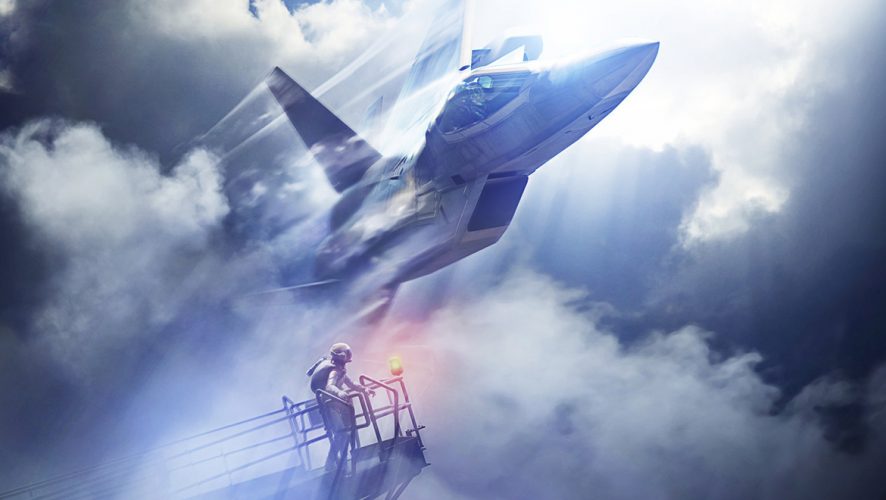 Flying games and flight simulators are not games that can be enjoyed by the masses. Perhaps it’s due to an absolute lack of spatial intelligence, or lack of skills or knowledge, such as having a poor grasp of in-game flight mechanics. Such game titles fit better in the arcades, except that the Ace Combat series has been at it for a while, and still delighting fans everywhere. 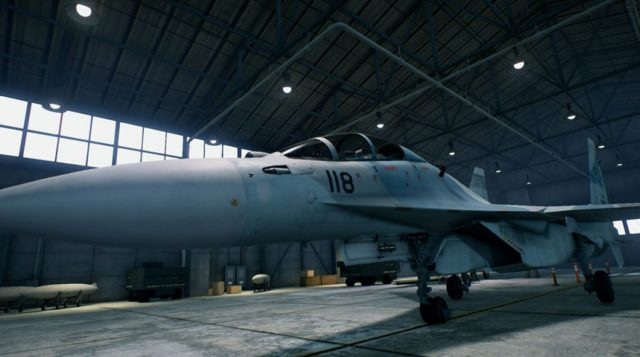 Make no mistake, Ace Combat 7: Skies Unknown is not an easy game to pick up. It’s not an arcade shooter, and this is more Forza or Cars, than Need For Speed. But like those racing simulation games, you need to invest time and effort, not only to master the gameplay mechanics, but also to appreciate the elements that make the game so much more fun.

Every time you crash, get shot down, or fail enough times to probably give veteran players second-hand embarrassment, or leave them in disbelief at the utter lack of aerial maneuvering abilities, is a step towards adapting to what it feels like to be a combat pilot. Where seasoned players are able to masterfully execute high-G turns, and fluid looping motions highly reminiscent of Cirque du Soleil acrobats, most players will probably be struggling to keep on course at a constant speed without crashing into cliffs or the sea, all while attempting to hunt down the target – only to, well, fail again. 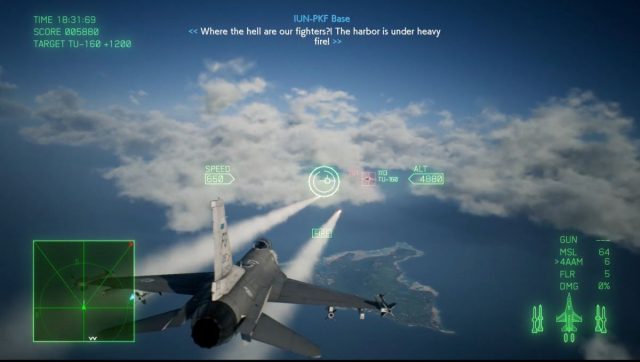 But try again, as Samuel Beckett’s quote assures, fail again, fail better. The whole cycle keeps coming into play until the mission is finally completed, and that’s when the great sense of satisfaction and accomplishment kicks in. The intoxicating concoction may not be sufficient to offset the frustration at times, but it does alleviate the suffering by a fair bit, which makes the experience less painful. Slightly.

It certainly doesn’t help that Ace Combat 7 offers little to no help in terms of gameplay, apart from a few text prompts on certain techniques, such as accelerating, yawing to the sides, and braking. The absence of a training mode or advanced tutorials also means players are unable to translate these instructions into practical use, and grasp the moves correctly. 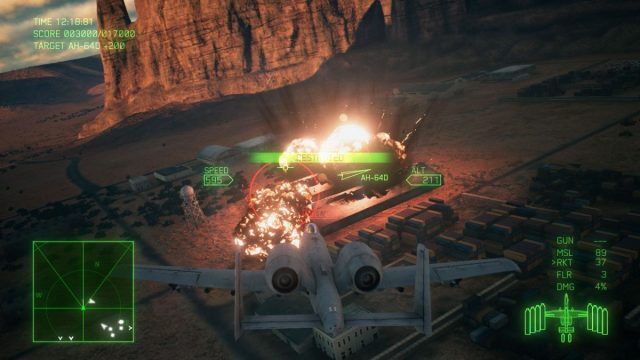 The controls for a high-G turn maneuver, for instance, are brought up in one of the earlier missions, but not everyone can master it without a quick ‘let’s try’, no-stakes session. Then, there are those mechanics that are not touched upon at all by the game, and the likes of launching bombs into ground targets would be an extremely relevant example.

Considering how often this comes into play throughout Ace Combat 7, one’d expect a brief rundown of the bomb’s workings; instead, players are immediately thrown into the deep end and forced to pick the skill up along the way. Newcomers, in particular, may find the touch-and-go approach a frustrating affair, and the pressure-cooking environment certainly doesn’t help matters.

On one hand, the lack of a detailed guide is understandable. The Ace Combat series, after all, caters to a specific, niche group of gamers, and its player base is mostly made up of loyal, long-time enthusiasts who probably know how to fly their way around a fighter jet with closed eyes. On the other, it’s quite ludicrous to assume that everyone is able to do as the game intends by pure instinct, and expect that fans can jump back in like no time has passed. It’s been five years since its last instalment was released, and 12 years since Ace Combat 6, so perhaps a refresher would have helped to ease the process. 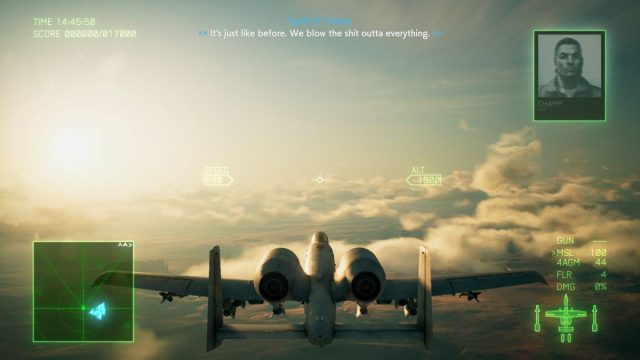 The game’s sparse instructional aid carries over to missions as well. While each one has a main objective or task to be completed, the prompt given can be rather vague and general – usually along the lines of defeating all enemies or protecting an alley – but is often accompanied by time limits or specific procedural constraints that are not stated explicitly. A 15-minute timer doesn’t always mean the player has the whole duration to take down enemies and shoot down MIG-21s for bonus points; sometimes, it means clearing out the skies within 10 minutes, and ensuring that the base isn’t obliterated by enemy fire, with the latter requirement being left out of the mission brief.

So yes, failure to complete such missions are to be expected. Confusion will kick in, as will helplessness and frustration. Everything, however, will go back on track after repeated attempts, where players start to get into the groove of learning the movements of enemy forces, and planning their follow-up actions accordingly. The trial-and-error experience does allow for replayability value and a better understanding of in-game mechanics, although it can be rather off-putting for those who don’t relish the monotony that comes with grinding. 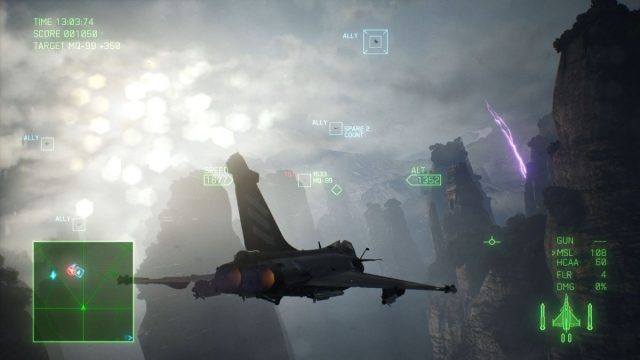 With Ace Combat 7’s meticulously-detailed world and its realistic, gorgeous visuals, at least gamers will still look pretty even as they fail repeatedly by crashing head-on into the craggy cliffs. In similar fashion to Forza Horizon 4 and Just Cause 4, the effects of weather are very finely mapped out, from the crystallised granules of frost in the clouds, to the glistening drops of rain on the jet’s wings.

The presence of thunderstorms isn’t the only weather hazard in this new, shiny instalment. There are sandstorms to look out for, thick blankets of fog to navigate through, and deadly, bright lightning streaks to avoid. Clouds, a new addition to the game, also cause fighters to freeze up at high altitude, and all these weather elements pose a perilous challenge than a mere aesthetic upgrade – getting struck by lightning, for instance, will disable weapons temporarily. 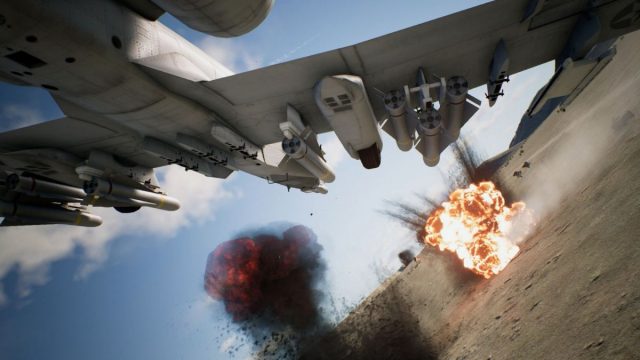 Aerial combat is a spectacle in itself, too. Explosions aren’t a pretty sight for sure, but here, they are almost like some sort of art, in a morbid sense of the word. Successful bombings see shrapnel darting out in every direction, as thick plumes of smoke engulf the felled fighter jets. When caught on fire, the flames spread fast, swaying erratically with the wind before dissolving into thin wisps of smoke. Beyond that, the scenery looks splendid, the planes boast outstanding design, and cutscenes are an absolute visual feast.

As I slowly shifted my focus to the impressive graphics, and learned to leverage on failure to further explore the game’s nuances, the experience of playing Ace Combat 7 became less tedious. The appeal of dogfighting became more apparent, even if the necessary skills to excel in it were lacking. There was a renewed thirst for victory, even as every moment in the thrill of the battle shome across.

As the game progresses, there will be the urge to go all Top Gun on the game, by clearing out the skies with way more aggression – but overzealousness is not always a good thing. Having a vindictive personality can lead to neglecting the mission objectives in favour of shooting down the nifty mosquitoes that are the MIG-21s, resulting in yet another failure. 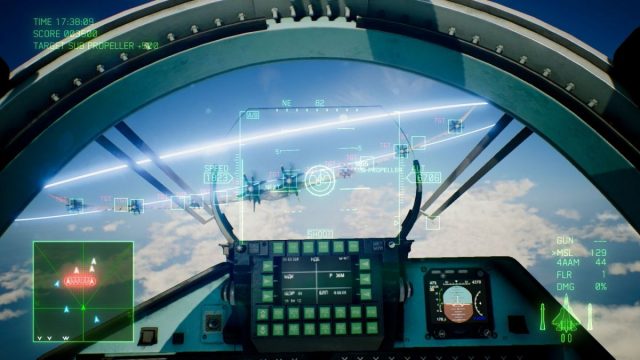 Letting go of the reins increases the fun factor, but there are still some aspects of Ace Combat 7 that never quite grew in my favour. While missions of different natures (stealth, escort, dogfighting, etc) bring variety to the table, the combination of fast-paced fun and the subsequent slow, winding sections is a chore to take on at times, especially since each mission can easily clock in 30 minutes or more. Taking care of multiple problems at once, and then being forced again to complete the failed objectives, further serves to sap the enjoyment out of the thrill of flying and fighting. Thankfully, the game’s lock-on system for weapons is fairly intuitive without demanding for precise aiming, which makes combat a more pleasant experience. 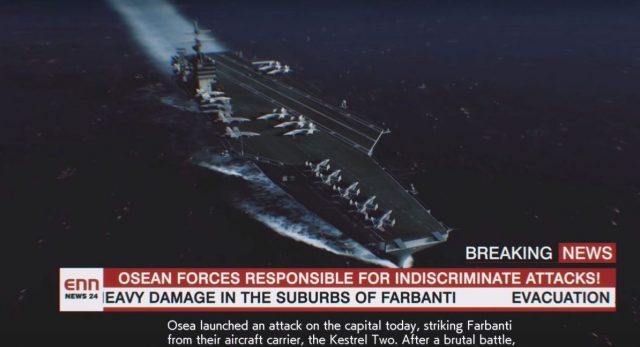 Story-wise, Ace Combat 7 retains the same melodramatic flair of the series that old-time fans may be endeared to. The fictional world of Strangereal is once again plagued with war, as the forces of the Osean Federation and Kingdom of Erusa clash against each other. “Trigger”, the callsign of a young promising rookie in the Osean Air Defence, is the player character this time, whose bright future takes a turn for the bad when he kills the former president of the nation.

Murder is a major crime, so of course he gets thrown into prison, which coincidentally happens to also be an airbase in disguise. In repentance of his sins, he battles for the Osean Federation as part of a squadron. All onboard the drama train! 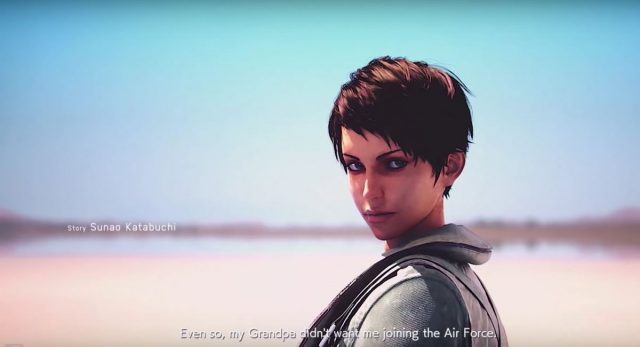 The other star of the cinematic cutscenes is a boyishly attractive mechanic, who opens the game with a flashback about how her grandfather and his friends rebuilt an old airplane that she piloted into a middle of a war, resulting in her incarceration. In the most cliche way possible, Trigger ends up in the same prison, and that’s where his narrative weaves in. It’s as entertaining as it’s ridiculous, but no matter – Ace Combat isn’t known for its story, anyway.

Accompanying the main campaign is a straightforward multiplayer mode that comes with two options in tow: an eight-player free-for-all, or a team deathmatch of two to four players in each squad. Scoring points is the name of the game here: victory is determined by the highest score, and not by the number of kills or hits. There are also some thoughtful features in place to even out the odds, with a bounty heaped on the first-placed player and the two runner-ups, such that each successful hit or kill garners extra points. The experience, in my pathetic one-game attempt, is rather engaging, but can quickly evolve into chaos in free-for-all matches. 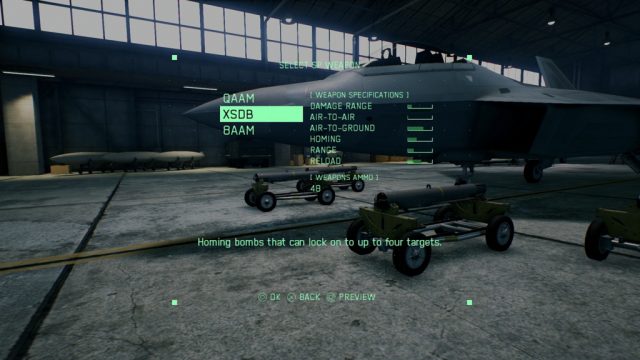 Should players find themselves being inflicted with a losing streak, they have the choice to swap out their current plane for another one. The Aircraft Tree connects to both the solo campaign and online multiplayer, which means any models unlocked as part of the former can be brought into latter. The mechanics are simple: complete missions, earn points, and gain access to new weapons, vehicles, and upgrade parts. In a game where increased missile capacity or tighter turning radius can provide a boost in navigating the unfriendly skies, the Aircraft Tree plays an important role in one’s piloting career – more so in the campaign than multiplayer. 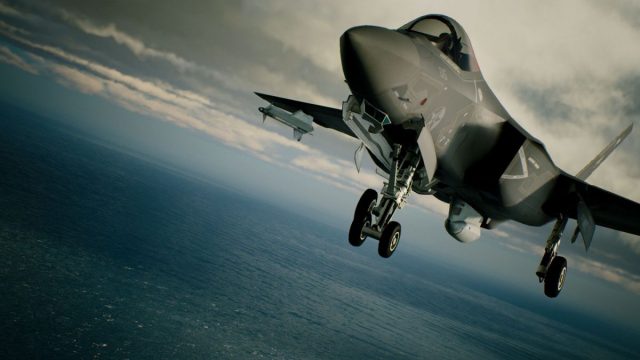 At the end of it, Ace Combat 7: Skies Unknown is not for everyone. Maneuvers remain as difficult as ever, missions continue to be overwhelming at times, and failure can be demoralising. Yet, along the way, the nightmarish-turned-satisfactory game managed to win this player over, as it was no longer as frustrating as before, even growing to be a delightful, enjoyable experience on good days. Maybe a second flyby isn’t in the cards, but veteran pilots should be more than happy to.

Ace Combat 7: Skies Unknown requires a certain grasp of combat flight mechanics from past gameplay experience, which makes it punishing and brutal for newcomers. Long-time fans, however, should seek comfort and pleasure in taking to the skies once again as they relive the thrill of flying and dogfighting, while being treated to polished, finely-detailed visuals.