There is understandably plenty of excitement and anticipation surrounding Sucker Punch Productions‘ next project, Ghost of Tsushima. Following its stellar State of Play presentation, the revenge tale of Jin Sakai is one we cannot wait to sink our teeth into.

While the 17 July release date is about two months away, our curiosity was satiated as we sat down to talk Ghost of Tsushima with Game Director, Nate Fox, once more since E3 2018.

The Magic of Tsushima

Instantly, the images of ancient Japan catches the eye whenever we see Jin in action. Be it exploring interesting landmarks, riding his steed, or taking in the beauty of Tsushima, the world that Sucker Punch has created is breathtaking right from the off. For an American studio, that was a major undertaking.

Even though we were fans of samurai comics and movies, we were totally unprepared to make this game and that we needed a lot of help.

So we reached out to experts in many fields, from religion, to architecture, to clothing, or to motion, on how best to recreate the culture of the time.

The fact that Sucker Punch is part of the PlayStation first-party family helped as well. SIE Japan Studio were on hand to guide the team during their research trips to Tsushima. The Japanese developers went so far as to help with field recordings to ensure the sound you hear in Ghost of Tsushima is perfect.

The island itself is as much a character as Jin. Although the team is not recreating the island of  Tsushima “stone for stone,” Sucker Punch took “a lot of the different aspects of nature that you associate with feudal Japan” and infusing that into the world players will step into.

As shown off at the recent State of Play, there is more to the gorgeous visuals than Sucker Punch’s efforts to have as little UI on-screen as possible. The wind plays a vital role in guiding players to their destinations, as well as reflecting their progress in a sense.

“Many, many aspects of our game are about the wind and its relationship to Jin. It’s changed his identity with the people and the way that the island is gonna react to him,” Fox shared.

“The wind is actually under the command of the player, the player can decide where it’s going to lead them,” and whenever the need arises, updating where players need to head next.

An open-world that is empty serves no purpose, but Ghost of Tsushima will likely not run into problems there. If players choose to divert from the main storyline, there is plenty to discover.

“Curiosity is constantly rewarded,” Fox emphasised. “We want to make sure that as a player, should you decide to not follow the wind, to go off on your own and just explore, that your curiosity about a strange shaped tree or odd lake is rewarded with content.”

It can be “either something valuable to pick up, or a story to discover or maybe even a new weapon.”

We make sure that we have enough rewards that we can scatter them all throughout the island, to these places that feel special. And in doing that the player gets on this loop of saying, “Oh, I wonder what that is. There’s a fire on the hill.”

They go to that fire, they find Mongols torching a house. They deal with it and then they start riding down the hill, only to hear a bird trying to say, “Hey, you know that there’s something over here,” and they could choose to follow that bird.

Animals such as foxes and birds also seemingly have a close connection with Jin, pushing players in the pursuit of secrets and hidden locations. Together with the wind, it all aids in reducing UI clutter, but also provides a sense of magic about your role in this conflict.

When pressed on whether Ghost of Tsushima will feature any mythological connections with Jin’s close bond with nature, Fox reiterated there were “no monsters or demons” and that the game is “grounded.”

The Faces of Jin Sakai

That groundedness extends to the main gameplay elements of Ghost of Tsushima. Pitting a one-man army against the might of the invading Mongols, it is a tale both steeped in history as well as fiction.

We wanted to give players the opportunity to be a samurai. But what we didn’t have was a crisis, a set of villains for you to fight. So in doing some research, I had seen that the Mongols had invaded Japan and that their first landfall was the island of Tsushima.

On that island, eighty real-life samurai rode forth to meet the Mongols, and they all were slain. So we’re taking inspiration from this real historical event. And from that moment of invasion, inventing a fictional story with all fictional characters. In our world, a few of the Samurai survive, and they have to reinvent themselves in order to fight back against the overwhelming odds.

Those odds are certainly daunting, even for a master samurai like Jin. The weapon combat in Ghost of Tsushima lends a sense of importance to every move, requiring strategy and timing that comes with its own risks and rewards.

A skilled player can easily “kill the Mongols with one hit or a few,” but it also means that “you as the player die if you hit a few times.” Skill is essential, but for those looking to experience the story, there are difficulty options for that as well.

Such design is a big departure from the likes of InFamous, Sucker Punch’s previous series, where flashy powers and swiftness are often at the forefront. However, the expertise that the team has honed did not go to waste for this new adventure.

Our objective was to take that knowledge from making the InFamous games and apply it to recreating a classic samurai movie in an interactive media. And the combat is grounded and intense but you still have that immediacy of the InFamous games when you choose to attack or evade. It’s all very snappy.

The snappiness will come in handy when Jin faces off with multiple foes. You are welcome to be aggressive and press your advantage in combat, just remember to rein it in when the situation calls for it. Yet, the combat seems to shine even brighter when it comes down to duels. Many classic films featuring samurai often culminate in a climax between two duelling warriors, and Ghost of Tsushima will give players plenty of opportunities to do just that.

Be it in the main story or as part of the many different side quests, each victorious battle will leave you with a “strong feeling of accomplishment.” After all, you are reading your opponents, thinking of your next move, it is mental chess with a very sharp blade.

That said, while certain points will definitely require the edge of your katana, Jin is also embracing the less honourable side of combat. The sheer numbers he will have to face means applying different methods to even the odds. Stabbing opponents in the back, using trickery and deception, manoeuvring with the grappling hook, a ghost is needed to do what a samurai cannot.

With the advanced weaponry that the Mongols will bring, it is also up to Jin to take advantage of that. Gunpowder can be fashioned into smoke bombs, for example, and it remains to be seen just how the tables can be turned on the invaders.

As Jin builds on his success, so will his abilities. Players can look forward to spending their “technique points inside of a very traditional skill tree where players can choose how they want to accent their play style.”

So you might be a swordsman, love up-close fighting, whereas I like archery, to hang back and use ranged combat. The ghost morphs to the kind of playstyle that you like best.

In fact, the bows are a fond favourite of Fox. “I really love the way that bows are handled in this game. One of our designers kind of came up with a prototype for how arrows would work through physics in the world. And instantly, you can playtest it, see if it’s fun. It’s sort of moments that really make game development feel joyful because you are playing the game like a real player would, and you’re just smiling.”

Everything in Ghost of Tsushima comes with a certain kind of flair. This is evident just from the graphical standpoint. The inclusion of ‘samurai cinema’ mode that pays homage to the films of old does not just add a black and white, film grain filter. It even intensifies weather effects together with the audio. It truly immerses the player into a cinematic experience.

If that is not up your alley, neither are you shortchanged. According to Fox, the ‘samurai cinema’ mode is “absolutely beautiful and it is us trying to show how much we respect the source material, but the game is gorgeous in full colour.”

I ride through the fields and forests of Tsushima and just drink it in. It’s like going on a hike or being outside. I think that the game’s graphics, and the way they help make you feel like you’re inside of a samurai movie are the biggest accomplishment and the colour really helps that. It’s a personal preference, but for me, it is the way that I choose to play.

Jin himself looks great as well, both in action or while enjoying the relative peace whenever he can. While the character himself cannot be changed outside of his gear, the different colours players can play with allows you to express who you are through Jin. For Sucker Punch, the cape is an integral part of that expression as well.

Samurai in these movies are a romantic ideal. That cape blowing in the wind, the wind being the thing that guides Jin, he is just drifting, is part of making the game feel more cinematic.

I think the most intriguing thing to me, I don’t know if you noticed, but he has actually no bow on his back when he has a cape and that bow shows up when he doesn’t have a cape. We dynamically remove it because it’s so cool to have a cape.

Indeed, Ghost of Tsushima is shaping up to be a really cool sendoff for the PS4 as we head into the next generation. As another day sets on a truly impressive console generation, what better way to end it than with a man of honour, striving for a better tomorrow. 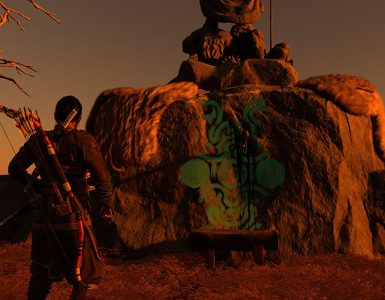 Deciphering the mysteries of the Wind Shrines on Iki Island. 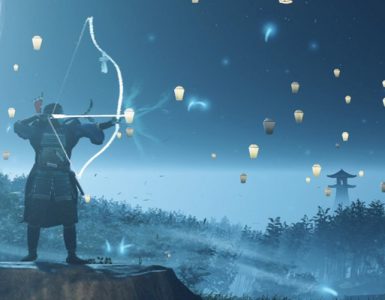 Mastering the way of the bow.