They’ve been building the hype up for a long time for this, but we’ve finally gotten snippets of what to expect for September’s Borderlands 3.

Gearbox Software hosted a gameplay reveal event, led by CEO Randy Pitchford, in a livestream on May 1.

In the hour-long livestream, we were treated to a slew of new features that will most certainly make the wait for the Borderlands 3‘s September 13 release agonisingly exciting.

The first of these cool new features is the ability to slide and mantle over ledges. Gearbox has clearly taken inspiration from modern shooters such as Titanfall. This alone is rather groundbreaking in that you’re more mobile as you dart and weave across the battlefield.

Another really sweet new addition is that some guns come with an alternate firing mode.

For example, one gun allows you to switch to a tracking dart, which marks the target, so that when you swap to the normal mode, all the bullets from that mode will instantly home on the marked target.

This alt firing mode effectively doubles your weapon loadout, as you’ll have many more new ways to kill your foes. And yes, we did get to see the walking gun!

Of course, you can’t make new changes to just the loot and guns without doing the same to the playable Vault Hunters. This time, the characters will have access to not just one, but three Action Skills.

A lot of these different skills are clear deviations of skills from the Vault Hunters of the older games. For example, Amara’s Phasegrasp is highly reminiscent of Maya’s Phaselock ability.

Each of these are swappable at any given time, and can be modified thanks to the various augmentations on each Skill Tree they’re assigned to. Zane’s Barrier ability has an augmentation that gives Vault Hunters regeneration, much like Roland’s Medic branch for his Scorpio Turret ability.

Nothing has been revealed about skill respec, but you can expect it to take place in some form.

And in the case of Zane the Operative, you can equip two Action Skills at the same time!

Going back to guns, you can now have what is called loot instancing. This is an optional feature in co-op mode that allows you to get your own loot, without having to worry about fighting other players for the same ones.

This also means that loot will be scaled to your level, as will the enemies when you join another player’s game.

Another huge implementation in Borderlands 3 is the expansion of the game world to multiple worlds.

You’ll now be able to traverse outside of Pandora into other planets, thanks to the hyperspace capabilities of the all-new Sanctuary III – the game’s hub.

In Sanctuary III itself, you’ll find a ton of familiar faces and shops, such as Marcus’ Weapon Vending Machines, as well as fan-favourites Lilith and Maya, Sirens from the first and second Borderlands games respectively.

The reveal also showcased several new boss fights, many of whom will be linked to the main antagonists of the game – the Calypso Twins.

Although we didn’t get to see the Twins in the flesh, we managed to get a glimpse of their various bases and minions.

Regardless of the setting, enemies and new features, Borderlands 3 retains the cel-shaded art style and tone from all its predecessors, with triple the fun and zaniness.

Borderlands 3 releases on September 13 on PS4, Xbox One and PC on the Epic Games Store. 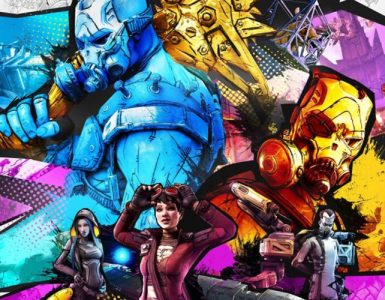