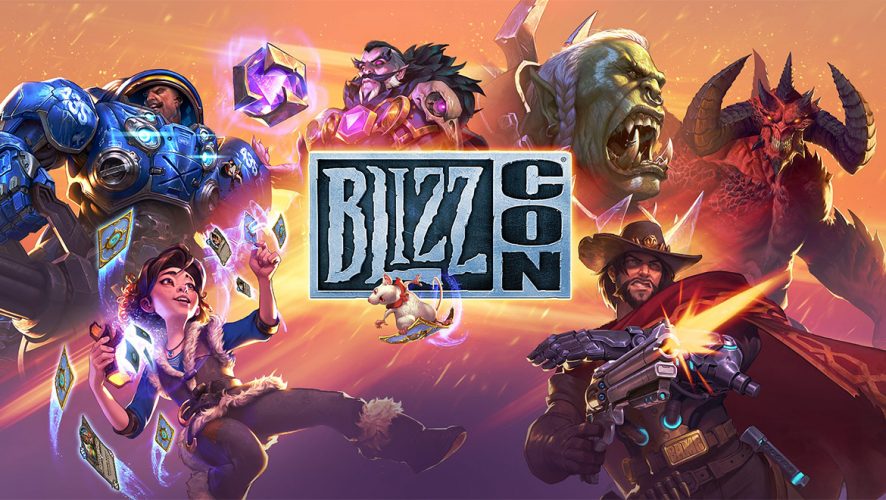 It’s that time of year once again, where Blizzard fans gather in the masses in Anaheim for the annual BlizzCon 2018. While it’s a fantastic opportunity for the community to celebrate their love for Blizzard Entertainment’s iconic franchises, we all know the big reason why fans attend and watch the convention – to find out what’s coming up next for the company’s games.

If those pesky time zones made it difficult for you to catch these announcements live, no worries, as here is a roundup of all the exciting highlights and trailers from BlizzCon 2018!

More and more games are heading to mobile devices these days, and Diablo is joining the party. Described as a “full-fledged action RPG”, Blizzard announced Diablo Immortal, a mobile game created in partnership with NetEase that explores the 20 years of stories that happened between Diablo II and Diablo III.

Choose from one of six heroic classes (monk, necromancer, barbarian, crusader, wizard, and demon hunter) and jump into some massive multiplayer online style of gameplay spanning across eight shared public zones such as the Bilefen, Zoltun Kulle’s library, and the capital city of Westmarch. For a more intimate experience, there will also be instanced dungeons for teams of four where, unlike the shared public zones, slain monsters will remain dead without respawning.

The Diablo team aims for the game to be an ongoing project, with future updates to bring new classes and content for players over time.

Overwatch fans were in for a real treat at BlizzCon 2018. Kicking things off was a new animated cinematic Reunion that looks at our favourite cowboy McCree as he faces his old Deadlock gang in Route 66.

And in the midst of the fascinating new faces in the short is none other than hero 29 herself, Ashe. A villain of sorts, the fearless leader of the Deadlock gang first grew up in a wealthy family, before a chance encounter with young McCree opened her eyes to the criminal side.

Ashe is unique as she was initially a character created and designed purely for the animated short, voiced by veteran Jennifer Hale. Once the team saw her in the cinematic, the designers were enthralled by her badass look and story that they immediately started doing up plans for her to be a playable character, and thus Ashe was born as hero 29!

As for her abilities, she is a damage class hero wielding a lever-action rifle called the Viper with primary and scoped alternate fire options. Her Coach Gun knocks back both herself and enemies for mobility and evasion, while her Dynamite is her highest damage ability that has a long fuse, but that is offset by her ability to shoot and detonate it at will.

You couldn’t have missed the mustachio-ed, bowler-hat-wearing burly Omnic named B.O.B. in the short, who turns out to be her butler and ultimate ability in the game! Essentially spawning as another hero, B.O.B. jumps into battle when summoned, knocking enemies upwards and shooting them with his gun. He can be healed, buffed/debuffed, contest objectives, and even get nano-boosted by a friendly Ana!

Move aside McCree, Ashe is now the hottest gunslinger in the West.

‘Ello mon, Hearthstone is gon be all about dem trolls for da next expansion! Rastakhan’s Rumble heads to the Gurubashi Arena of Stranglethorn Vale where trolls across Azeroth gather teams to fight on behalf of their Loa for glory and the favour of King Rastakhan. The Loa are nine powerful gods (one for each Hearthstone class), legendary minion cards that fight by your side and guide you to victory.

The new keyword of this expansion is Overkill. The Overkill mechanic lets you attack with a weapon or minion up to three times in a turn, provided your previous attack destroyed an enemy minion with more damage than was necessary. There will also be single-player content included in the expansion, a mode called Rumble Run where players meet an upstart troll searching for the title of champion in the arena.

Get ready to rumble with Rastakhan when the expansion drops on December 4, 2018!

Blizzard teased their anticipated Tides of Vengeance update for the Battle for Azeroth expansion with a cinematic trailer, Lost Honour, where King Anduin Wrynn confronts an imprisoned Varok Saurfang on why the orc warrior had chosen to spare his life.

The update will be the first time that players get to experience unique Horde and Alliance versions of the conflict, with different bosses, narratives, and encounters for the two factions. Players can expect a new raid zone of the Battle of Dazar’alor, a new Battle for Darkshore battleground, as well as new island expeditions and improvements to island rewards and pacing.

Tides of Vengeance goes live on December 11 in North America, December 12 in Europe, and December 13 in Asia.

The heroes of Heroes of the Storm have always been a collection of characters from Blizzard’s other popular franchises, but say hello to the game’s first original hero – Orphea.

Born entirely in the Nexus, Orphea is the daughter of the Raven Lord, thus her title of the Heir of Raven Court. Her character description reads:

“Rejecting the dark power her father had begun to consort with, Orphea tried to run away from the Raven Lord’s Influence. But after witnessing King’s Crest fall to his machinations, she was convinced she needed to stand and fight. She now vows to protect the innocent – as a Hero of the Nexus!”

She is a mid-range Assassin, unleashing chaotic magic to fend off foes and sustain herself in battle.

Orphea will be getting a “Slacker Orphea” skin as seen in the trailer, which also reveals a comical Janitor Leoric skin that was a fan-art creation made into reality and it’s a funny take on the fearsome Skeleton King from Diablo.

Blizzard certainly hasn’t disappointed at this year’s BlizzCon, and it looks like fans have an exciting year of new game content to look forward to!