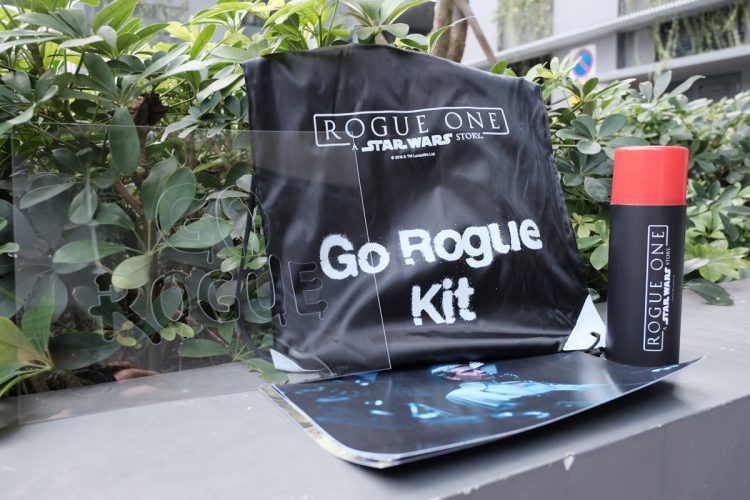 A New Hope has Risen – Time to Go Rogue

The rebellion is in full swing in Singapore with the release of Rogue One. And, if you’ve yet to catch it in the cinemas, we’ve only one question – why?

If you’re kept your eyes peeled, multiple bus stop ads have been tagged by the rebellion prior to the movie’s release and Disney has sent us what it might be their own kit to do the deed.

And like all responsible companies out there it was wise of them to ensure that anyone in possession of this kit would not get out to any serious mischief.

Supplied within the kit would be various stencils and stills from the movie the kit gave us a great canvas to show our displeasure for the Empire. After all, who wouldn’t want to unleash a bit of deviant behaviour especially towards an oppressive regime?

Us being us, it always pays to test the spray out first on the flip side. Release date 15 December? At this juncture, I’ve already watched the movie twice and some folks might have gone back for more. Trust us, it’s that good.

A decent first try. Not like we do this for a living, though it might be a good career choice stealing Imperial ships and hanging out with blind Jedi temple guardians.

Using a much lighter touch for our next attempted yielded much better results.

There’s no turning back now especially when Lord Vader is in the picture!

As much as we’d love to admire our handiwork, it’s far too dangerous to leave this out in the open. If only there was a way to smuggle it across the galaxy and place these into the hands of those who can make good use of them. Perhaps, a droid could help!

The rebellion is now in full swing. It’s time to #GoRogueSg and grab your tickets for Star Wars Rogue One in cinemas now.