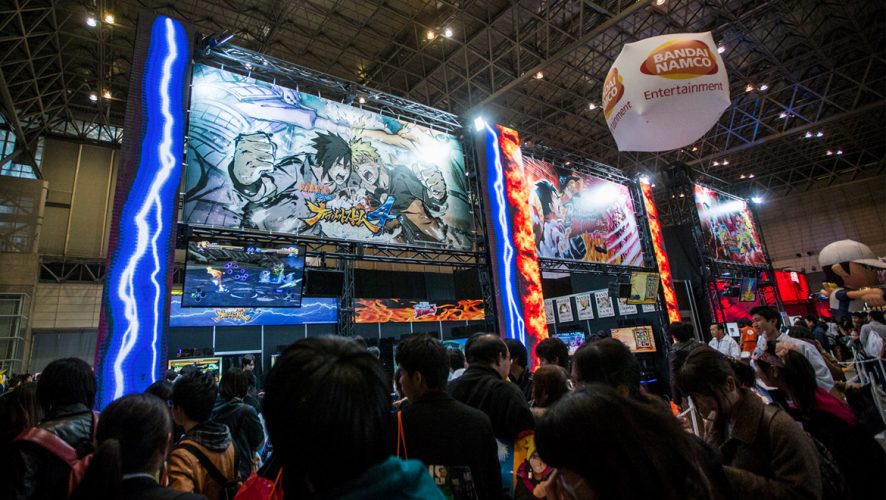 As 2015 comes to a close, Bandai Namco Entertainment has announced their video game lineup for 2016, and it’s gotten us looking forward to the new year. (To be fair, any news of a new Tales Of game will get us excited.)

We had a chance to visit the Bandai Namco Entertainment headquarters in Tokyo just before Christmas, and they gave us a sneak peek into their exciting games for the new year. We also had a chat with some of the game producers, to get more insights into what fans can look out for.

All interviews were conducted jointly with PlayStation Lifestyle, and the full transcripts can be found on their website.

The latest instalment of the Ultimate Ninja Storm series boasts a revamped battle system, which includes the Change Leader System, in which players can control three team members simultaneously. This allows players to recreate their favourite teams from Naruto Shippuden, or have them creating their own. Players can switch characters seamlessly and fans of the series can also look forward to new enemies such as Kaguya, Madara and Obito.

Harnessing the power of the new next generation consoles also allows for even better graphics and dazzling battle animations.

For those unfamiliar with the Naruto series (we promise not to judge you, but seriously, how can you not?), the game caters for this and includes an Adventure Mode, where players can uncover memory fragments and discover the rich backstory behind the characters.

Featuring a tons of characters from various Japanese game publishers Capcom, Sega and Bandai Namco, the game is a tactical role-playing game in which players need to strategise and manoeuvre their characters through turn-based battles with enemies.

This sequel will also see select characters from Nintendo appearing for the first time in the series.

Developed by Spike Chunsoft, One Piece: Burning Blood is a departure from the usual musou style gameplay that previous One Piece games have favoured. This 3V3 fighting game focuses on each character’s unique fighting abilities, and it also takes into consideration Devil Fruit abilities and the use of Haki in battles. The combined switch in fighting format now adds a strategic element in which players must select the right team members depending on the enemies faced, and know when to swap characters in and out in real time, to maximise abilities.

The game’s design is also more similar to that of the anime, which gives it a fresh new look on your console. Colours are more vibrant, and the battle animations bring out the combat elements. The battle roster has also been updated, and now includes new playable characters such as Bartolomeo and Sabo. The full list hasn’t been revealed yet though, so we’re looking forward to hearing more about the game in the coming months.

We had a chat with Game Director Hiroyuki Kaneko and Game Producer Koji Nakajima, check it at PlayStation Lifestyle

The Joestar family returns for a new and original adventure set in Europe, Africa, Australasia and the Middle East. In this fast paced fighting game, players will get to choose from a roster of over 50 characters, each with their own unique fighting styles and abilities, and battle it out in a new 2v2 format.

Check out our interview with Noriaki Niino, producer of the game, at PlayStation Lifestyle

Sword Art Online (SAO) fans will definitely be interested in this original story, which was created together with the original author of the novels, Reki Kawahara. Based on a new MMORPG world, Aincrad, which was built over the original virtual world where Sword Art all started, the game will see Kirito and company explore this new yet familiar world, facing new monsters and challenges along the way.

Thus, decisions made along the way can affect party members, who could get upset and have to be pacified by the lead player. This feature is unique to Hollow Realization in the series.

The giant mechas of Gundam form a hugely popular franchise, and this new versus game brings loads of fast-paced and thrilling mecha action. Boasting a huge roster of new Mobile Suits, the game also introduces characters from Gundam Reconquista and Mobile Suit Gundam: Iron-Blooded Orphans in their video game debut.

Players will get to choose between embarking on the original 2V2 format battles, or team battles where players form squads with up to six Mobile Suits and one battleship for some epic fights.

When Ace Combat 7 was announced at PlayStation Experience earlier this month, we were treated to a breathtaking flight through blues skies as we soared above fluffy clouds. But what kept us thrilled was when we were told that the game will include content built for the upcoming PlayStation VR virtual reality head gear.

The producer and brand manager of the series, Kazutoki Kono, shared that they’ve received positive feedback from fans and communities since the announcement, and stressed that they are focused on making a “true sequel” to Ace Combat 6 that fans will love, while utilising the trueSKY technology and Unreal Engine 4.

At the same time, those new to the franchise will be able to easily pick up Ace Combat 7’s campaign, and challenge fellow pilots in multiplayer battles.

The full interview is available here

The latest in the Tales series will have its first solo female heroine, Velvet Crowe. Velvet’s adventure will take place in the Midgand Sacred Kingdom, which is made up of numerous archipelagos, and the game explores her conflict between emotion and reason.

We expect to hear more details about the game in 2016.

There was much rejoicing when Sony unveiled the announce trailer at PlayStation Experience earlier this month. I’m definitely looking forward to hearing more about the sequel to the award-winning, heartstrings-tugging Ni No Kuni, whose beautiful art and story have captivated 1.9 million gamers since its release.