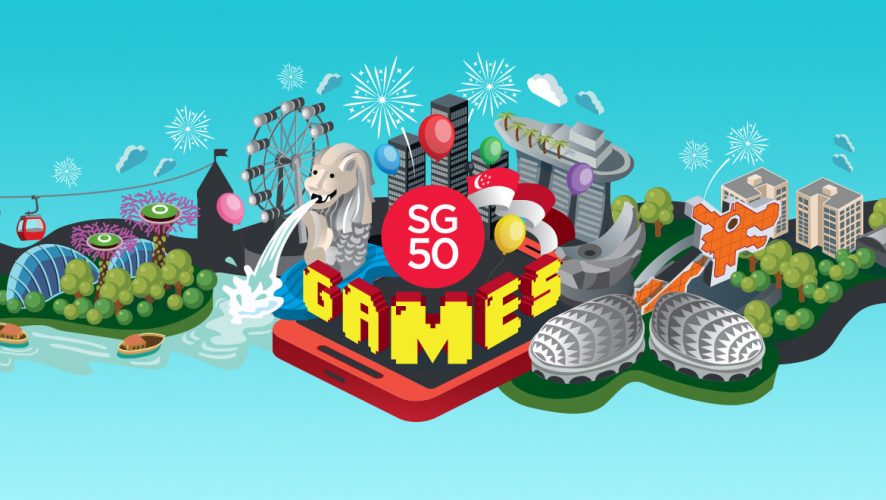 This past year has been great for game developers in Singapore. With homegrown titles like Holy Potatoes! A Weapon Shop?! and Romans In My Carpet! garnering mainstream attention and success, and the upcoming Masquerada making waves at E3 in Los Angeles last month, it looks like the local game industry is finally hitting its stride and getting the recognition it deserves.

Their success serves to fuel the growing sentiment that made-in-Singapore games can, indeed, measure up to their international counterparts in terms of quality and production values. The Media Development Authority of Singapore has been pushing pretty hard for growth in the game development sector over the last decade, and with our nation’s 50th birthday on the horizon, it’s no surprise that games with a uniquely-Singaporean flavour will be part of the celebrations.

The SG50 Games lineup consists of 5 locally-developed mobile titles that were chosen from more than 40 entries. These 5 games represent a slice of Singaporean culture, and take a light-hearted approach in educating players about local history. The games are now out for free on iOS and Android, and I’ve taken all 5 of them for a spin. Check out my thoughts below.

The game is perfect for multiplayer, and you can connect with 2 to 4 friends for some quick, mindless fun anytime, anywhere. It’s also very accessible, and just about anyone can pick up the simple game mechanics within a minute or two – frantically tapping buttons as fast as possible is a pretty simple concept to grasp, even for non-gamers!

In terms of sheer fun factor, KAN-CHEONG! Kopitiam Saga definitely delivers. This game is best enjoyed in short bursts with friends – say, while waiting for your orders to arrive at a kopitiam. Does life imitate art, or art imitate life?

Ever played Crazy Taxi? Rickshaw Rush is something like that, with the biggest difference being your chosen form of public transportation.

As a Rickshaw driver, you are presented with an overhead view of the area, and must race to ferry your passengers to their destination. Do so in time, and be rewarded with collectable caricatures of local historical figures like Sir Stamford Raffles; fail to reach your destination before the timer (or your stamina) runs out, and its game over!

The game takes place on several levels which are populated by various landmarks and iconic local architecture. You’ll come across familiar buildings like HDB flats and shophouses on your journeys – even the dreaded ERP gantry, which you must learn to avoid!

As a single-player game, Rickshaw Rush is a great way to pass the time while you’re waiting for the train or bus to arrive. The later levels can get a little frantic, so be prepared to fail and re-try a few times!

Building The Lion by Swag Soft

Building The Lion is probably a better Monopoly: Singapore than Monopoly: Singapore itself. For one, the graphics are much better! The basic concept is familiar: Roll the dice, move your avatar, and amass wealth to build property in order to amass MORE wealth.

Maybe the game is trying to tell me something about my choice of career. Perhaps it is a statement about the property market here in Singapore. Or maybe I’m just reading too much into things.

In any case though, Building The Lion puts an educational spin on a classic board game, by having you learn more about local landmarks, culture, and people via collectable trivia cards that can be found. You can even partake in mini-games based on old-school favourites like gasing, chapteh, and longkang fish!

Out of all 5 titles, Building The Lion is easily the most visually impressive, and features tried-and-true gameplay. Just have fun and try not to take things too seriously – as similar as it might be, this isn’t actually Monopoly!

My Singapore City by Ixora Studios

A memory-matching game paired with a city builder – that’s basically My Singapore City in a nutshell. It’s a rather interesting combination that works surprisingly well.

I’m sure we’ve all played memory-matching games at some point in time; the objective is to clear the board by flipping matching tiles over before time runs out. In this case, the tiles represent familiar Singaporean buildings and landmarks, such as the Esplanade and Marina Bay Sands.

My Singapore City adds an interesting twist to a familiar genre, though. These iconic landmarks can be added to the player’s collection, and they can be placed on a map of Singapore in whichever location you like. When placed, these landmarks can confer a variety of benefits and enhancements, and even generate income for the player!

The game offers both co-operative and competitive play – you could pay a visit to your friends’ cities and help them with their progress, or challenge them on a high-score leaderboard that is updated weekly.

What I personally liked best about My Singapore City was that the game allowed players to choose different time periods to play in. By doing so, you could unlock landmarks from a different era and add more variety to your very own Singapore cityscape.

Are any fans of Diner Dash reading this article? If so, this is the perfect game for you! As Adi, the owner of a budding satay establishment, your job in Satay Club is to prepare and serve up delicious satay to your customers, keep them happy, and turn a profit.

Sounds simple? You’ll also have to manage your business effectively in order to make sure it keeps up with the pace of growth – increasing seat capacity, hiring additional staff, and even fending off gangsters is all part of running a successful eating place, as it turns out!

Satay Club is rendered in gorgeous pixel art reminiscent of 80s video games, and the animations are cute, charming and evoke a great sense of nostalgia. The backdrop of 1940s Beach Road is lovingly re-created in this style, and I have to say I am very impressed with Afzanizam Zahari for having achieved all of this on his own. Top marks!

It’s not difficult to see why these 5 games were chosen to be part of the SG50 Games lineup – they are well-made, polished experiences that are fun and enjoyable in their own right; the Singaporean flavour is just icing on the cake. I’d heartily recommend checking them out, if at the very least to show our support for local developers who have surely put in a lot of effort to make these games.

Besides, they’re free to download and play, and which true blue Singaporean doesn’t enjoy free stuff?