It’s spooky season, which means it’s time for horror games galore! There’s no perfect time to load up some horror games and get the jitters that’ll keep us up at night. These picks will be no ‘horror’ games that bless you with a pump-action shotgun, instead, these are indie horror games designed to lodge themselves into the darkest corner of the cellar in your heart.

None of the games on this list are graphically demanding, instead doing the smart thing of leaving room for the players’ imagination to fill in the gaps, where true terror lies. The best part? All these games are free, so you can get the bejeezus scared out of you at no cost.

A game made with the retro Atari 2600 style graphics, FAITH’s premise is reminiscent of the classic movie, The Exorcist. The game has players taking on the role of a lone young priest investigating a case of demonic possession that happened in a deserted house seemingly in the middle of nowhere. Not only that, the story has layers that reveal themselves bit by bit, tiny delicious morsels that make the game difficult to put down.

The most terrifying part of the game has to be its audio. Using the low-res aesthetic to the fullest, the grainy, off-kilter sound effects are unsettling. This is a game that will keep players on edge throughout.

Doki Doki Literature Club is a romance visual novel. Yes, yes, it’s supposed to be Halloween season, but we feel bad for all the anxiety-inducing stuff we will be subjecting you to. So, relax, woo a virtual girlfriend, nothing will go wrong here. This is just a normal lovey-dovey story where nothing disturbing will happen.

No fourth-wall-breaking shenanigans that send chills down your spine. None whatsoever. No genre subversion, no twists, no horrific happenings. Nope. Just a normal, innocent, colourful visual novel.

Good horror games toy around with the players’ assumption of what they have control over. And while it is easy to end up relying on jumpscares that simply startle rather than horrify, Imscared chooses to play around with players’ expectations, presenting carefully crafted moments of suspense to get at their scares. Presented in a retro pixelated first-person format with awkward controls, the game is packed with surprises, and at times may even feel like it’s playing the players. That is perhaps as good as horror games get.

This is a game made in Twine, which means it is almost entirely in text. In fact, it is not a stretch to classify this game as more of a short story than a game. While there are sound effects, and there is superb pacing involved as the chunks of text appear at varying speeds, my father’s long, long legs is a testament to how terrifying the (almost) pure written word can be.

While this is not high brow literature, it definitely is a work with metaphorical tendrils that latch onto the readers and draw them ever closer into the darkness. For those who want more of the same, the uncle who works for nintendo, by the same developer, is also a well-written piece of horror worth experiencing.

What’s better than getting scared out of your mind? Getting scared with a friend! Eronoctosis is a networked co-op horror game, where players try to piece together what is going on in the game through multiple playthroughs, all while avoiding the monsters along the way. This is a stylish game with a distinctive aesthetic, with disturbing imagery abound and dark corners that hide countless spooks.

In this game, one player lights the way, while the other holds the power to banish the horrors. This asymmetry means that communication is key, and a well-placed scare could mean pandemonium as either player loses their cool. This is a scary game, but in an undeniably fun way.

Of course, there are more indie horror games out there to discover. We hope this small sampling whets your appetite for more, and illuminates a corner of the indie game space that deserves more attention. 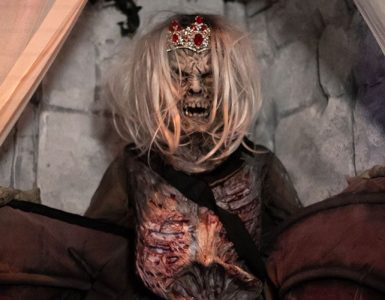 All kinds of scares for different kinds of visitors.