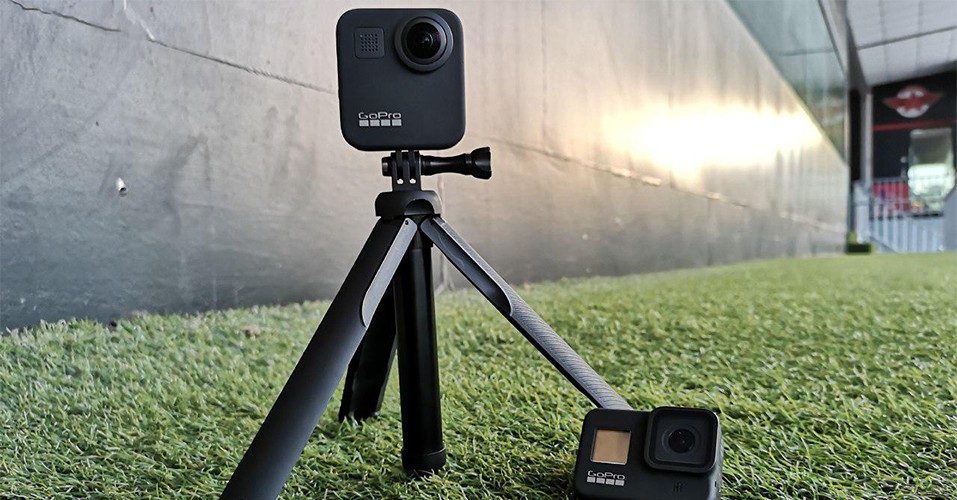 The Next Evolution of GoPro With The HERO8 Black and MAX

The GoPro brand has been synonymous with action cameras since it burst onto the scene back in 2002, giving consumers quality imaging in a rugged and small package. In 2019, the American company is trying to redefine what is possible with their cameras, mainly the GoPro HERO8 Black and the GoPro MAX.

Be it a capturing a precious moment in time or recording death-defying stunts, GoPro’s latest cameras are headlined by new technologies, mainly an improved HyperSmooth, better TimeWarp capabilities, an array of digital lenses, improved audio capture, all in a lighter, frameless design with folding mounting fingers.

What better way to test it all out than at one of Singapore’s go-karting circuits, a high-speed environment full of wind, bumps, and action all around. Strapped to our helmets and chest harnesses were the new GoPro HERO8 Black, all prepped and ready to capture our best impressions at being fast and furious on the asphalt.

Putting the GoPro HERO8 Black to the test

The results are stunning, to say the least. HyperSmooth 2.0 produced footage that was buttery smooth, even though our time on the track was anything but. The fact that it is available in every frame rate or resolution, even the slow-mo modes, makes it even more impressive. And surprisingly, the wind-noise reduction technology largely worked as advertised, giving us clear and crisp audio of the engine roaring.

It can be jarring to watch the footage in action if it is overly stabilised, but in the HERO8 Black’s case, it did not feel unnatural or overprocessed.

HyperSmooth 2.0 can be further improved using the Boost mode, which will come in handy when you are expecting high-impact and sudden movement, at the cost of a more narrow field of view with the cropping.

Even if you somehow managed to mess up your levelling, you can fix it in post with the help of GoPro’s editing app and the Horzion Lock feature. Now all your footage can get that extra bit of professional polish.

In fact, all of the footage captured in the new line will start off at 1080p, even LiveStreaming. For consumers looking to maximise their output, Linear mode (which removes lens warp) is available in 4K, and the maximum bitrate has been upped to 100Mbps at 4K as well.

The TimeWarp 2.0 has also undergone an overhaul of sorts, giving you the freedom to do what you want with a hyperlapse mode that adapts to your speed automatically. You can even slow things down with a tap of a button, lending an extra cool effect with the transition between real-time and slo-mo.

For newcomers to the GoPro products, picking it up and swiping through the options was as intuitive as it gets. The presets were particularly useful in helping consumers pick the best options without having to worry about the minutiae.

Activity mode is perfect for a skateboard ride, Standard works well for hiking and less strenuous adventures, while Cinematic and Slo-Mo presets give you exactly what they mean. Users can add their own presets as well, customising the various options you have on the touchscreen.

For photo buffs, the Digital Lenses feature condenses the field of view settings for photos into an easily understandable slider. Dragging and changing gives you the preview in real-time, ensuring you can capture the shot you want without a fuss. The SuperView provides the widest FOV with minimal distortion this time around as well.

The new LiveBurst feature helps along the same vein, pressing the shutter will capture 1.5 seconds of footage before and after the press. The results are a three-second video clip, or 90 frames of the shot, all you need to do is find that perfect shot.

The HERO8 Black can also be transformed into a vlogging or production powerhouse with GoPro’s new modular accessory ecosystem.

The Media Mod adds shotgun-mic directional audio performance and features two cold shoe mounts for additional accessories along with Type-C, HDMI and 3.5mm external mic adapter ports. The Display Mod is a folding front- or rear-facing 1.90-inch display that will come in handy for framing, while the waterproof (up to 10m) Light Mod is rechargeable, comes with a diffuser, and can light up wherever you are shooting.

Maximising the experience with the MAX

While we did not have much time to go hands-on with the GoPro MAX, the technology on show was quite intriguing. It is everything the HERO8 Black is, and then some. It can be used as a single lens max stabilized HERO camera, a dual-lens 360 camera, or for vlogging, the versatility is unparalleled.

Adding Max HyperSmooth, Max TimeWarp, and Max Superview improves upon the already remarkable baseline performances in the HERO8 Black. The Reframe feature on the app adds a new keyframe-based editing experience, which gives you the power to “reframe” 360 footage into a traditional video with smooth pans and transitions.

The great video stabilisation, the digital lenses, all the technological innovations, and six microphones that can capture all the audio you need, the MAX is truly the pinnacle of the GoPro lineup.

We have barely touched the tip of the iceberg that is all the features of the new GoPro HERO8 Black, the new Mods, as well as the MAX. However, what we have experienced and seen got us wanting more. And if you are interested or already part of the fanbase, you can get your hands on the HERO8 Black (S$599) and the MAX (S$740) right now.