World of Warcraft has built up quite a legacy over the years, and that legacy includes the massive amount of lore surrounding its many iconic characters and rich universe. Spawning countless books, graphic novels, comics, and even a movie, these colourful stories play as big of a role in World of Warcraft as the MMO gameplay.

In the lead-up to its upcoming seventh expansion, Battle for Azeroth, Blizzard is releasing a series of digital comics to fill in some gaps and bring to life a visual representation of the events in Azeroth.  The first comic in the series was Reunion, centred around Jaina Proudmoore reflecting on the past in the ruins of Theramore. For the second comic, the team decided to focus on Magni Bronzebeard, due in particular to his connection to Azeroth and the titan that lives within it. 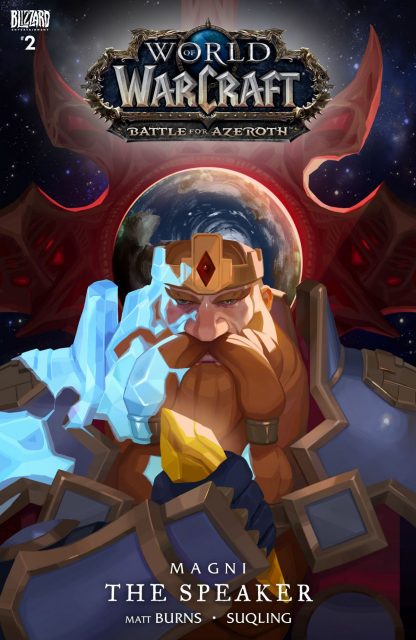 Magni’s connection to the titan’s spirit is weakened, and he is unable to communicate with her or get a clear message from her. He ventures to the wastes of Silithus, the place where Sargeras dealt a grievous blow to Azeroth, to see if he can reconnect with Azeroth’s spirit. Written by Matt Burns and illustrated by Suqling, Burns wanted to highlight the consequences of Azeroth being hurt by the sword of Sargeras in Legion, and illuminate the method by which Magni communicates with her in the first place.

Here’s an exclusive sneak peek at the first two pages of The Speaker, one day before it’s full release on 30 May 2018 on the World of Warcraft website, and we hope for more comics until Battle of Azeroth‘s release on 14 August 2018.