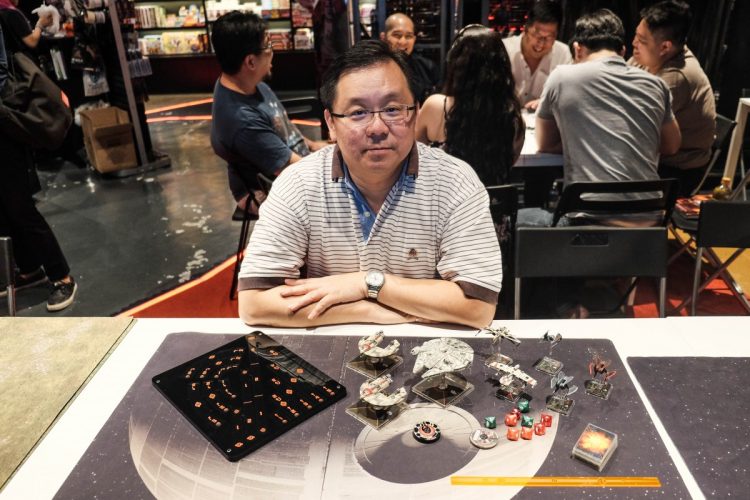 Sure, somewhere at Industrial Light and Magic Singapore, there’s a Singaporean Padawan or two somewhere, who did us proud working on a Star Wars related animated series.

But then there’s this guy – Singaporean lawyer Justin Phua, 50, who recently won the X-Wing World’s Championship 2017. That not only makes him a Jedi Knight, he probably deserves a seat on the Jedi Council. Even though he has 2 kids (daughters age 16 and 13) and a busy job, gaming has always been in Justin’s blood.

“You are born either a gamer or a non-gamer,” replies the 50-year-old champion, who insists that he got lucky this year. 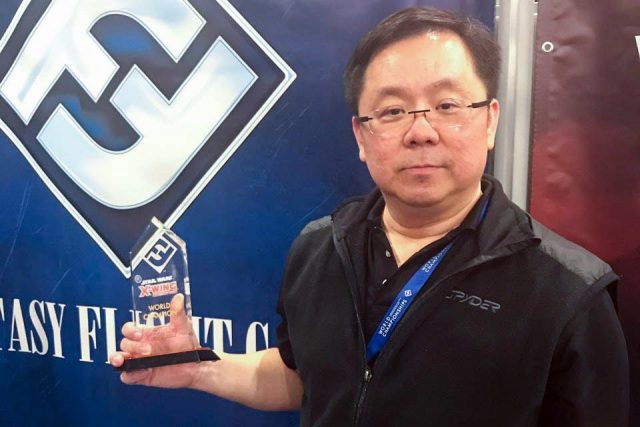 I know, it all sounds like Wookie to us, but this is what he currently spends his spare time on. He has since spent about S$2,000 on the X-Wing Miniatures game, which he says is his only hobby.

And his reason for loving the game is pretty much the reason he enjoys being a lawyer – the game simulates a real time battle between 2 opposing forces.

Justin’s rise to be the best in the world started from being at the bottom. Back then, he and his regular tabletop gaming buddy, Dawei, decided to pick up the X-Wing game after trying a demo game against each other. Right after that demo game, they participated in their very first tournament, organised by a local game store. 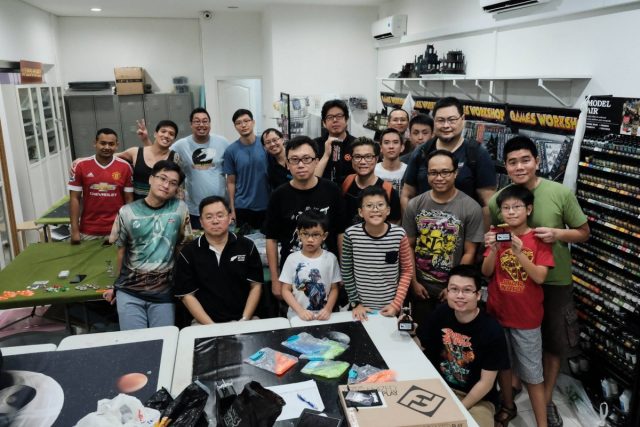 Like the Death Star, their debut didn’t go to well and blew up in their faces.

By round 3, both of them were relegated to the bottom, and were made to compete against 10-year-old kids.

“It was a humbling experience but a necessary step in the learning curve,” recalls the player of his first major loss.

Now, Justin and Dawei are both respected players in the local X-Wing community. In fact, Dawei was crowned the X-Wing Singapore Open 2016 champion. 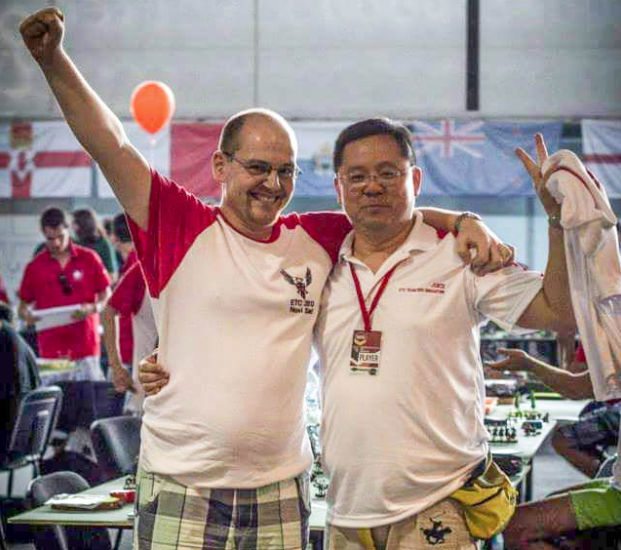 Justin is a seasoned veteran when it comes to overseas tournaments. During his Warhammer Fantasy days, he traveled to Europe with other Singapore players to compete in team tournaments. For X-Wing, he participates actively in local store tournaments, and sometimes even heads up north to take part in Malaysian tournaments. 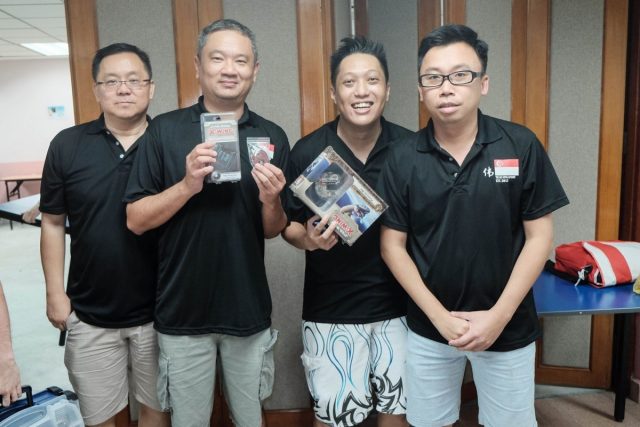 After doing well in the local tournament scene, Justin was inspired to travel further when his own friends were successful in tournaments overseas. Dawei emerged 49th in the 2016 World in the US. Another gaming buddy, David, was ranked Top 8th at a System Open Tournament in the US.

This inspired Justin and another buddy, Lam, to make the trip to US this year to compete in the most prestigious international level tournament: The X-Wing World Championship.

The Road to Victory

The trip to the X-Wing World Championship 2017 cost Justin about S$2,500, but he says it was worth it, with it being the most prestigious tournament for X-Wing. There, nearly 400 players competed for the top spot. 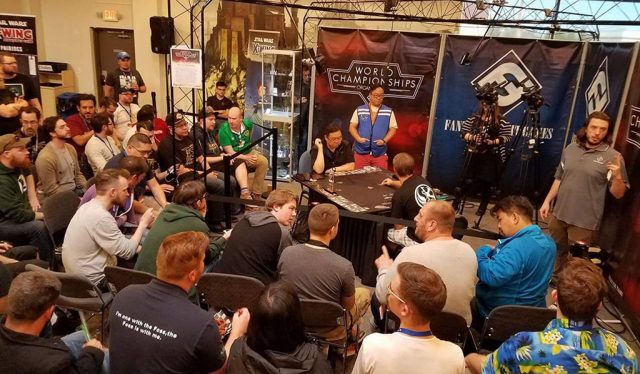 The participants were divided into 2 pods (Day 1A and Day 1B) of not more than 200 players each. Each pod had to go through 7 games of 75 mins each, playing back to back, before all but 64 players were eliminated from each pod.

The 128 winners from the 2 batches then competed again on Day 2 in another 2 games, leaving the top 16 winners. This was followed by another 4 elimination rounds to cut to 8, then 4 and finally the final. In total, there were 7 rounds for Day 1A or Day 1B, and 6 rounds for Day 2. Prizes, in the form of special edition gaming tools by game developer FFG, were awarded to winners at each stage of the tournament. 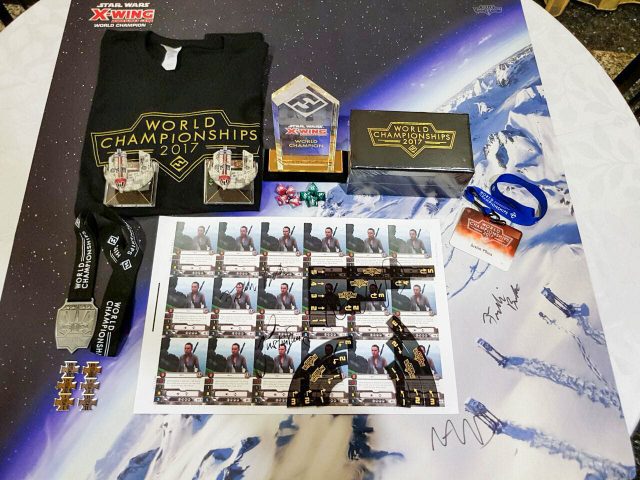 Prior to the competition, Justin thought that he would do well, but he definitely did not expect to take home the top prize. Do or do not Justin. A wise man once said that.

In fact, his main goal for the championships was to make it to the second day of the tournament, so that he could get his hands on some loot.

“My intent was to make it to Day 2, which would have earned me some targeting tokens.”

But he ended up getting into Top 16, which earned him special dice. Upon reaching the Top 8, he was presented special maneuver templates.

He recalls, “That was what I wanted and needed. So I was pretty much in harmony with myself, in that every win thereafter was a bonus to me. I was calm and that helped my confidence and game play.”

But that was before he found himself face to face against Nand Torfs, the reigning world champion, for the finals. Nand is a very charismatic figure, and enjoyed the support of nearly all the spectators there. 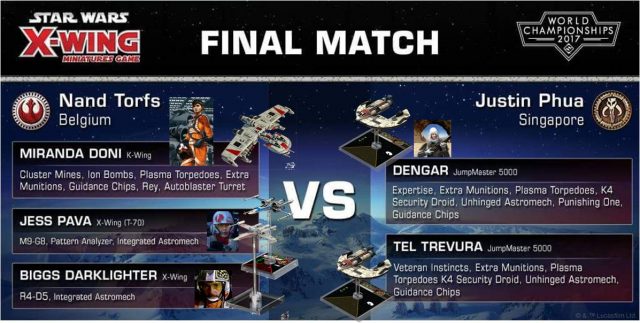 “That was unnerving. But he was also friendly to me. I like him.”

At the start of the match, Justin felt that the game was in his favour based on the pilots and starfighters that each of them had selected for the tournament. Justin shared that his list was specially conceived to deal with lists such as the one Nand was using, and all he needed to do was to be calm, and follow his game plan.

However, when the match started, Nand’s dice evade rolls were pretty hot, and he managed to evade most of Justin’s shots. To make things worse, Nand’s star fighters manage to damage Justin’s star fighters heavily in the return fire. At some point, Justin prepared himself mentally to lose.

“I usually do not blame the dice for the outcome. But the initial exchanges based on dice results were indeed not in my favor, and were somewhat disappointing but I endured and fought on.” he said.

“I reminded myself that even if I were to lose now, it’s no shame because I had exceeded all expectation by being the Top 2.”

And his shot came midway in the game, when he took out Nand’s K-wing (Miranda), his opponent’s most expensive starfighter. After that, Justin managed to effectively bump his Jumpmasters into Nand’s X-wings, to avoid being focused fired upon.

“Thereafter, I effectively bumped Dengar into either Biggs or Jess to avoid fighting both ships, and also ensure Dengar had the arc to perform retaliatory attack. In this way, I was effectively conducting two strikes against Nand’s one strike. That was the turning point.”

This ensured that Justin’s Jumpmaster, Dengar, was able to perform a bonus retaliatory attack using Dengar’s ability. This way, he was effectively using twice the firepower compared to Nand’s.

It might have been a competition, but Justin showed tremendous amount of sportsmanship throughout. During the Championship, there were instances where Justin reminded his opponents when they forgot to take action or make attack, instead of capitalising on it, and he has a good reason to do so. 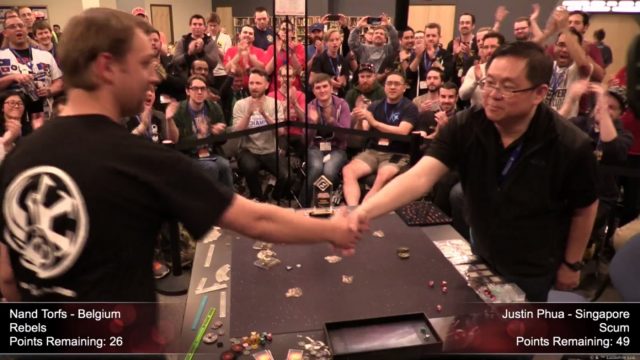 “While the Missed Opportunity rule exists to cover careless mistakes such as forgetting to attack or take an action, I would be loathed to lose a game owing to such mistakes. Hence, I reminded my opponents about their mistakes as I do not want to do unto others what I do not want others to do unto me.”

For doing so, Justin was applauded by the spectators of the final match. It also made him look sort of bad-ass, as he allowed his opponents to correct their mistakes before calmly decimating their fighter squadron. The spirit of the Jedi lives in this one.

Getting into the Game

For those who want to get into the game, here’s a bit of bad new – there is no official distribution for the game here. But if you’re looking to try out the X-Wing Miniatures game, Justin recommends either Gamersaurus Rex on Mondays or Battle Bunker on Fridays, where there will be a friendly players to guide new ones. New players can buy a starter set to get basic miniatures and gaming tools, or simply borrow miniatures from the community players.

“Borrow from other players or proxy with other models to get a feel of the game and playing style before making further commitments, as the game has 3 different factions, ships and play styles.”

Staying on Target in the X-Wing Competitive Scene 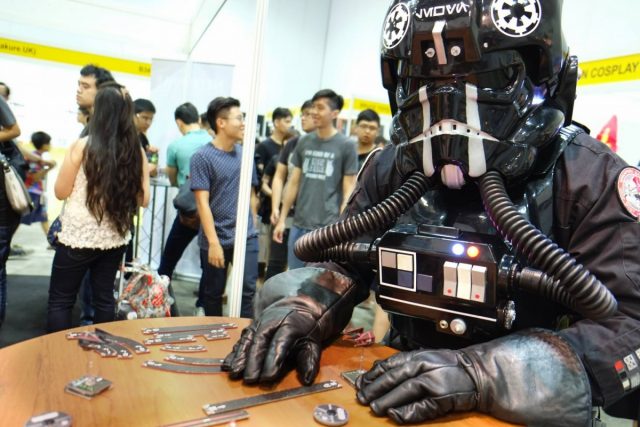 The next step would be to take part in competitions. Justin says the best way to train for tournaments in the competitive scene would be to get an experienced player to mentor and coach you in practice games. After that, one can form a gaming group to practice hard together. Eventually, with much patience and perseverance, one will naturally perform well in the X-Wing miniatures competition scene.

“Practice hard. Do not be afraid or discouraged of losing to overcome the learning curve.”