Despite all of Android’s strengths, there are aspects of the ecosystem where it pales in comparison to Apple, and wearables is one of them. The Android Wear OS has always had a weak showing, leading to fragmentation in the wearables space for Android users.

Thus, it came as a surprise when Samsung and Google decided to finally combine powers to make a smartwatch worthy to be added to the Android family. In a move that made Samsung drop Tizen OS, its own watch OS, both companies are now collaborating to unveil the first Wear OS 3 smartwatch, in the form of the Samsung Galaxy Watch 4 and Watch 4 Classic.

If anything, it’s a step in the right direction though we’re not sure if it’ll stem the flow of users hopping over to iOS and the Apple Watch.

What is clear is that the Samsung Galaxy Watch 4 has sports enthusiasts in mind when designing the brand new watch.

With Samsung’s BioActive sensor, both watches are able to measure heart rate, skeletal muscle, fat mass, and body fat, all at the touch of a button. While Samsung’s Galaxy Watches have been excellent in terms of tech, the software side of things has always been lacking. Now with Google fully onboard, the aim here is to ensure seamless integration across any fitness app a user prefers.

Google Fit will be fully supported by both Samsung Galaxy Watch 4 devices so this partnership is off to a strong start. In our exclusive hands-on, the UI feels quick and snappy which makes navigating the myriad of menus on such a small watch face a breeze.

Anyone who has used a Samsung Galaxy Watch device would swear by the control dial feature, and the combination of this with Google’s Wear OS is a dream come through Guess. Here’s hoping we might finally see how far Samsung and Google will be able to take the fight to Apple, and be a true contender in the wearables space.

Preorders are now live via Lazada and Shopee. 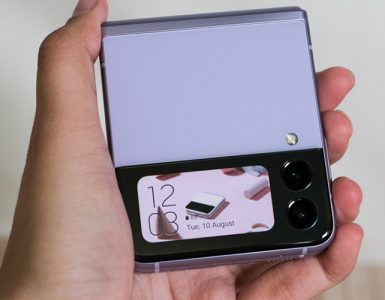 Since the trial is free, no harm giving the Samsung Galaxy Z Flip3 5G a spin!