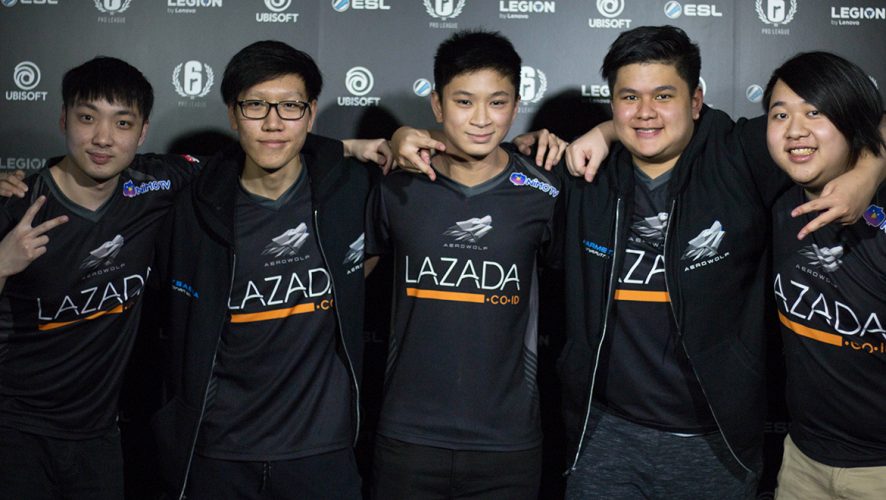 In a society where the often the strongest, fastest, fittest, or most powerful reign dominance, it’s always refreshing to hear of underdog victories and turnabout upsets. At the Rainbow Six Siege (R6S) APAC Finals, purposefully held a day before Ubisoft’s annual event in Japan titled Ubiday, there was plenty of that to go around. Going well into its quarter-final stage, the event saw a total of eight teams paired off in the battle to the finals, in which the top team and second runner-up get to qualify for the Pro League – the most prestigious R6S competition in the world. It’s a high-stakes game, and Team Singapore is one step closer to that dream.

Where hot Japanese favourite Nora Rengo walked away with a sweeping win over their South Korean counterpart New Life, the members of Aerowolf Pro Team faced tough opposition from the Australian representatives of Athletico. Comprising of Glen “Lunarmetal” Suryasaputra, Jeremy “HysteRiX” Tan, Adrian “Ysaera” Wui, Warren “Reveck” Lim, and Allesandro “Array” Billy, the quintet found themselves on the losing end after the first round. 0-1, and the only way for them to clinch victory was to pick themselves up and secure the next two maps under the best-of-three format – a feat easier said than done.

But captain Lunarmetal was confident that the quintet could do it. With a presence already established in the competitive scene, they had tons of past experiences to tap into, and doing so was what contributed to their eventual win.

He elaborates, “Because we are quite an old team, this is where experience came into play. Honestly, I don’t think anyone on this team was flustered when we lost the first round, as it fell within our expectations. We were struggling with Villa (the first map of the game), but we still could take maps two and three…we said it so many times: Consulate, Bank, Consulate, Bank, we’re going to win this.”

And while they sure did deliver on that promise, it was hardly a smooth ride. Athletico pulled no punches despite their comfortable victory in the first round, and managed to whip up some impressive teamwork kills. Round nine of the second match, for instance, saw player Tien “EmoRin” Lam pulling off a headshot from behind his shield, as Brandan “Derpeh” Carr followed up with two consecutive shots. In round three of the tie-breaker, Todd executed a sneak attack, before EmoRin finished off with a quick double kill. Excitement was abound, and the competition heating up – so much so that the two teams went into two overtime match points at the 1-0 scoreline.

READ ALSO:  No Watchmen Season 2 As Lindelof Departs As Showrunner

That, later, became 1-1 as HysteRiX snags a double kill to push Aerowolf into a tie-breaker. Backed up by impressive solo multi-kills and last-minute clutches, the team’s decision to adopt a more aggressive playstyle was certainly a good call. In the seventh round of the tie-breaker, sharpshooter Array delivers three killing shots at one go – a magnificent follow-up from his four-man kill on the Villa map; the deciding match saw the team staging a comeback victory after being brought down to 3-5. Two kills later, the scoreline evens out, but Aerowolf continues to forge on, eventually securing a spot for the semi-finals.

The recipe for the team’s success can be attributed to teamwork and trust: If a plan doesn’t quite work out, the members have no qualms with passing the baton to another. “We usually try out first, and if the role doesn’t work out, someone will take over, Lunarmetal explains. “The good thing about this team is that the older players have versatility, while the younger players have drive – they are the ones who can kick off the aggression – and there’s a good balance of newcomers and veterans.”

It’s too early for celebration, however. Aerowolf’s next opponent is Nora Rengo, and home support is expected to be off the charts. A daunting task lies ahead, but the team is all prepared to meet the challenge head-on with cool, calm confidence, and a strategy in tow.

Here to duke it out with Australian team Athletico at the quarter-final stage of the R6S APAC Finals, Singapore's very own @aerowolfproteam is looking sharp. Take the stage away, guys! #R6PL #r6siege #rainbowsixsiege #esports #ubisoft #singapore #aerowolf #geekculture #geek

“In general, we recognise that they (Nora Rengo) have plenty of firepower and they’re going to be wild, so I guess the question will be how controlled we can be against that kind of aggression,” shares Lunametal. “You’ve got to choose a tempo; if you can’t outplay them, you gotta slow down and wait for them to come to you.”

With the semi-final and final stages happening tomorrow in tandem with Ubiday 2018 (October 14, 2018), the game is on. All the best, Aerowolf!