As games these days push technical boundaries with each release, the hardware that supports them needs to do the same as well. Gaming monitors have constantly been testing the limits of what players can view on their screens, down to the split-second.

Singaporean manufacturer PRISM+ aims to push those limits once again with the new PG240 gaming monitor. Retailing from S$339, this 24-inch monitor sports a 165Hz IPS display, which lets players enjoy the smoothest of frame rates while playing FPS titles such as Overwatch, Valorant and Rainbow Six: Siege.

More importantly, this IPS display boasts a staggering 1ms response time, which makes it perform similar to a TN display, which most FPS players use for their games. Typical IPS displays have response times of 4-5ms, and are mainly used for superb viewing angles, colour reproduction and all-around picture quality, which is something TN monitors, which mostly focus on ultra-fast response times.

As such, the PG240 stands at a unique middle ground between the two types of monitors, and will no doubt appeal to gamers who also need to use their monitors for content creation. This is backed by the monitor’s built-in 125% sRGB Wide Color Gamut with a 1000:1 contrast ratio for the most crisp of colours on a gaming monitor.

Additional features on the PRISM+ PG240 include an ultra-slim ZeroBezel form factor to minimise the space it takes up at the table, as well as a built-in monitor stand that sports full dynamic articulation for added flexibility.

The PRISM+ is available for pre-order now on Lazada. 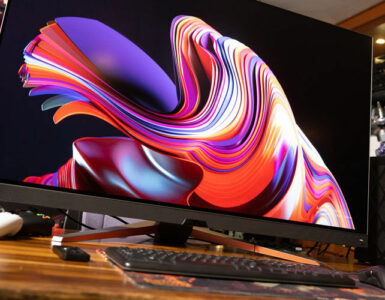 Move over, a new big boy is in town.