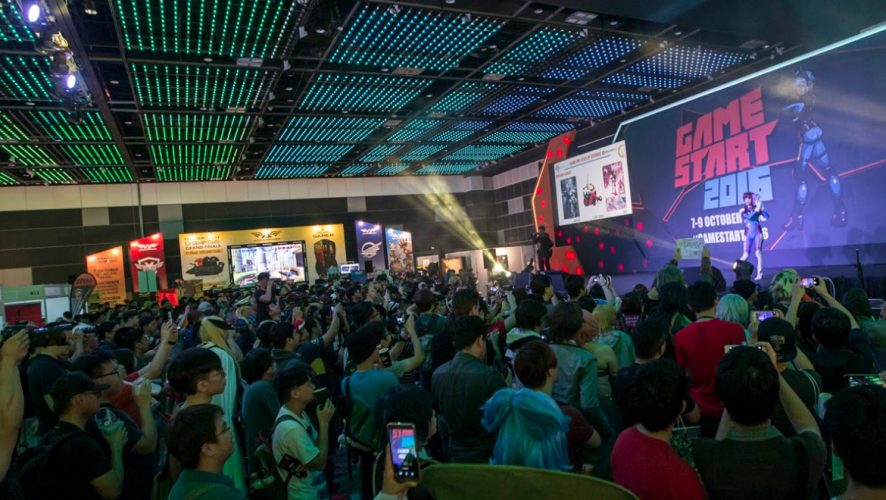 Prepare the Throne: GameStart 2017 Returns for the Crown!

Another year and another kick-ass edition of Southeast Asia’s premier gaming convention will soon be upon us! GameStart 2017 is happening this October 14 and 15 at the Suntec City Convention Centre for the fourth year running. Occupying three halls and sporting a cyberpunk theme, new additions are in order for all gamers and visitors to look forward to!

Competitive gaming fans will be able to experience the magic of esports at the Southeast Asia Major (SEAM), with fighting games galore, pro esports giants, and of course, the prize pool of over US$50,000 up for grabs!

For the first time ever, GameStart TableTop is bringing analogue gaming to the masses. Well-loved tabletop and arcade-style games will be available for you and your friends to try, and there are prizes to be won, just like the arcades of old! Exhibitor Wizards of the Coast is joining in the festivities with Magic: The Gathering, and local card haven, Grey Ogre Games are coming as well.

The ever-popular Doujin Market returns! In partnership with Neo Tokyo Project, Singapore’s largest community curated youth arts and illustration fair will have double the amount of artists at GameStart 2017. If you are a fan of cosplay, special guests AstroKerrie and Vera Chimera will also be gracing our shores. Join in the fun and even get in for free if you dress up, for Game On! GameStart Cosplay Runway 2017 will continue the tradition of recognising the efforts of local cosplayers!

GameStart 2017 has also partnered with the regions most popular conventions like Taipei Game Show, BEKRAF Game Prime, and C3 Anime Festival Asia to bring a curated selection of content and adds more variety to an already impressive lineup.

In addition to the plethora of console/PC games that are bound to be showcased at GameStart 2017 from industry stalwarts like PlayStation and Bandai Namco, the world’s first augmented reality Techno Sport will also be at GameStart. HADO Singapore invites all visitors to try out the Player VS Player mode and see the wonders of AR for yourself!

Founders Base is back for all indies and start-ups to exhibit their work to the fervent gaming crowd. Developers from the region should really grab the chance and come on down, booths are limited and a stage like GameStart only comes once a year!

The second edition of the International Mobile Gaming Awards (IMGA) SEA will happen on October 13. With almost 300 games submitted last year alone, there are bound to be some gems waiting to be discovered in 2017. The GameStart Indie Awards are up for grabs, do cast your vote for your favourite indie games and shine the spotlight on our aspiring talent!

“The gaming industry in Southeast Asia has grown exponentially since the inaugural GameStart in 2014. Esports is dominating online viewership and media globally, and developers in Singapore and the region are pushing out highly polished and engaging games. Tabletop gaming has a very passionate community, and I’m very happy to welcome them to GameStart this year. As always, GameStart aims to be where all gamers and all-things-gaming can come together and have fun and I’m excited to present this year’s edition.”

For business developers, the inaugural SEA Summit will be your cup of tea. A new B2B conference for regional game industry players, the joint project between IMGA and GameStart organisers, Eliphant, will facilitate knowledge sharing, networking opportunities, and collaborative discussions. With the full speakers and topics list to come, do keep a look out for this golden opportunity by registering for the SEA Summit (limited tickets).

So many exciting happenings to look forward to and it is only about two months away! If you are even remotely interested in gaming, this is the place to be. Tickets and official merchandise are still available here, so why not get your money’s worth and enjoy the regional king of gaming convention that is GameStart 2017!