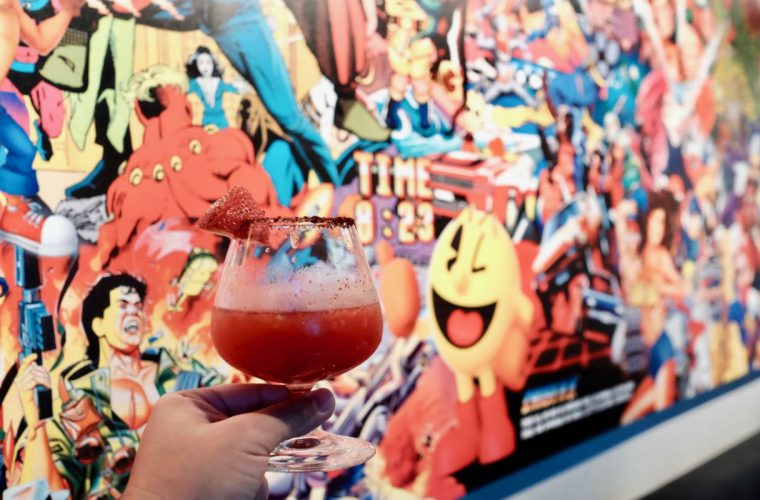 NINETEEN80 – The Perfect Nightspot For The Retro Gamer

Expect a throwback to the 80s with newly-launched nightspot NINETEEN80, complete with arcade games, nostalgic cocktails, retro music and countless pop culture references from that era.

Depending on who you ask, the cultural epoch that was the 80s was either the best or the worst decade they’ve ever lived in. On one hand the fashion was strange – those ridiculous colour combinations! – and mass consumerism rife, but the music and movies that came out of that era have been so definitive much of those have endured in some form or another to this day. The 80s also marked the rise of computer entertainment, a time when amusement arcades could be found on every street corner while Apple was still taking its fledgling steps towards becoming the computer giant it is today. 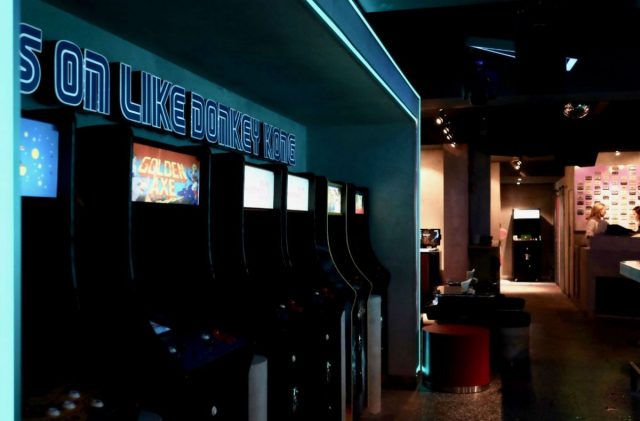 If you’re a child of the 80s and feeling nostalgic for those times, newly-launched concept bar and club NINETEEN80 by entertainment consultancy A Phat Cat Collective could be right up your alley. The retro-themed arcade bar is a total throwback to those good ‘ol days, with various arcade game machines strewn liberally around, playing New Wave and Synth Pop tunes that will cause your body to involuntarily jive to them with muscles you’ve not used in quite some time, and nostalgic cocktails to make you pine for your lost youth and vigour.

You’ll also fall in love with the decor; from the mixtapes that line one end of the bar and the wall-to-wall painting of multiple arcade game references that emblazon another, to the innocuous, random string of numbers on yet another wall that’s actually a code used during the era of pagers (for those unfamiliar with such retro tech, it’s those tiny black boxes that beeped to let you know someone wants to contact you). 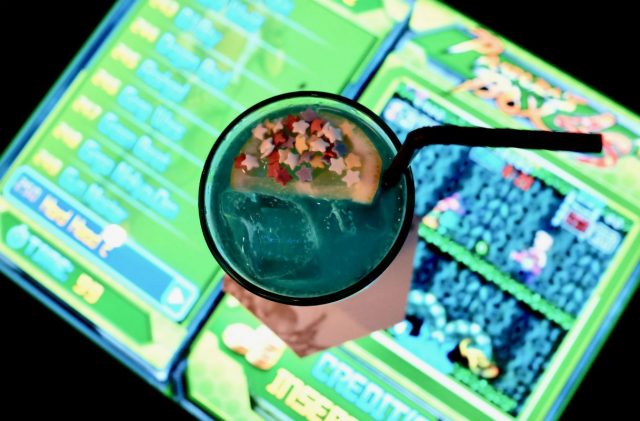 Expect cocktails like the sapphire-hued Blue Lagoon (S$18+, above), which has been given a modern twist with the use of yuzu juice, or the Long Island Tea (S$20+), that ultra-boozy concoction of five different spirit bases responsible for many a morning hangover in your distant youth (although now it may just give you that added edge needed to triumph at PacMan).

Don’t forget the Vodka Ribena (S$18+) – which combines a childhood love and an adult favourite into one rather tasty tipple – or the karaoke favourite of Tequila Sunrise (S$18+) either, the latter a sweet burst of orange, Campari and tequila. 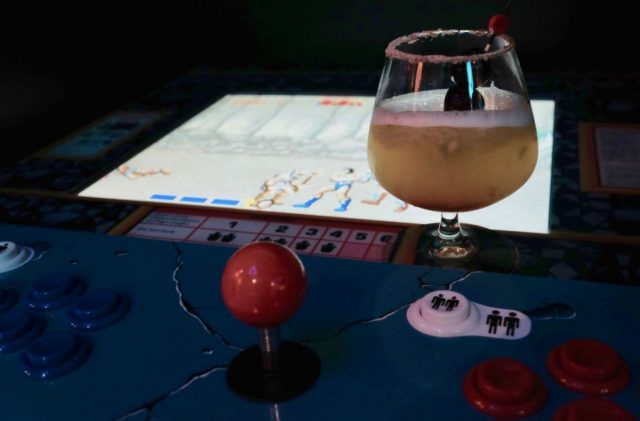 Or maybe you prefer the rum-based Club Tropicana (S$20+, above) while you engage in a round of Space Invaders or Mortal Kombat. This version of the classic summery Tropicana cocktail sees a remake with the interesting use of plum powder; but it could also be so named as a hat-tip and reference to Tropicana, the now-defunct entertainment venue with its topless revues that lasted till the late 80s when it was finally torn down and Pacific Plaza built in its place.

You might like to know that cocktails here are made with fresh fruits – the Donna Summer (S$20+, below) is essentially a pulpy rum-spiked strawberry shake – because NINETEEN80 understands your (aging) body can’t quite take too much synthetic, chemical crap anymore. They’re also really sympathetic to children of the 80s and only serve their signature cocktails till 9pm, because responsible adulting means going back at an acceptable time to tuck their children into bed. 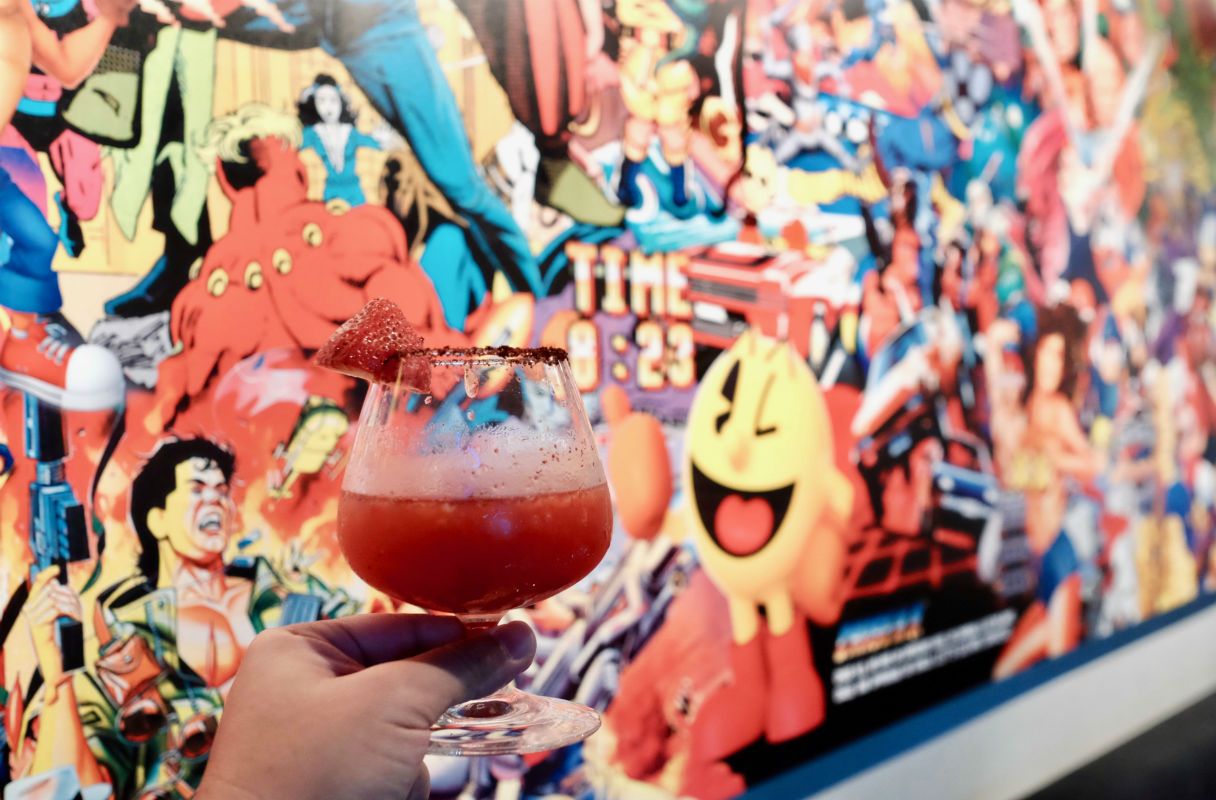 Of course, with NINETEEN80 closing at 3am on some nights that shouldn’t stop you from returning after to complete a round of two-player Golden Axe while banging back some tequila shots with like-minded friends. 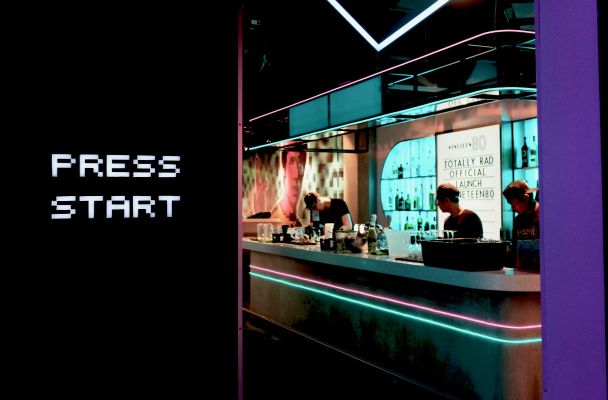