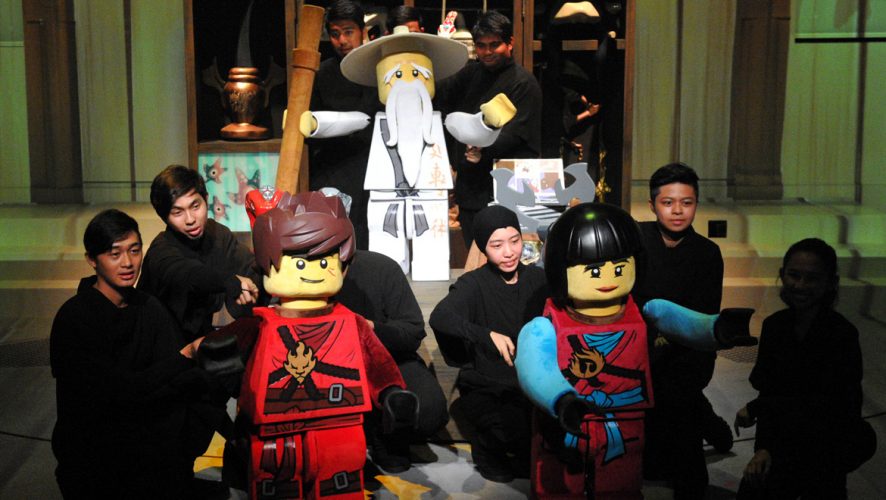 For Lego collectors only focused on Lego collections such as Star Wars, Disney, Marvel Comics and DC Comics, the Ninjago series might seem unfamiliar, but for the young children out there, Ninjago is their cultural equivalent of Saturday morning cartoons.

The cartoon series about the heroic ninjas has been around for quite a while, there are dozens of toy sets based on the series. Or is the cartoon itself based on the Lego toys? Legoland Malaysia is introducing a new live show that serves as the 11th, or lost episode, of the 10-episode 2015 season of the hit Ninjago cartoon show.

Watch as the ninjas, Kai, Nya, Zane, Cole, Jay and Lloyd protect, Bandit, a Yin Yang Dragon who has a potential future to become a powerful Light Dragon, or become a dark beast. Together with the audience, the ninjas must team-up to protect Ninjago from the evil Clouse and his Shadow Minions, who wants Bandit for himself.

The 20-minute show is scripted by award-winning Hollywood movie writers, Kevin and Dan Hageman, the same guys behind the Ninjago TV series, and the hit The Lego Movie, so audiences are in good hands.

Instead of having humans dressed in giant costumes modeled after the minifigs (giantfigs?), the live action show features six teen-sized puppets, each 1.2m in height. Hand built and crafted by specialists, each puppet is made up of 32 different parts and controlled by at least one person. Some require the use of two persons, to manipulate the movements of each puppet.

So if the puppets are not costumes, how are they being controlled?

Everything is simply done on stage. Controllers dressed entirely in black move all the characters, and that includes the flying Bandit. Yes, audiences can see the controllers walking across the stage, and the whole set-up does remind us of Japanese game shows where audiences are expected to ignore the folks in black.

In fact, this is actually known as bunraku, a traditional form of Japanese puppet theatre, where the puppet masters work in full view of the audience. One difference is that the voice acting here is all pre-recorded, so there is no live dialogue uttered on stage.

While the set-up might seem rather bizarre, the delivery is top-notch. By the time you’re fully focused on each walking, talking and moving puppet, the presence of the men in black fade into the background, and the result is an entertaining show that will impress the little ones.

Given that everything takes place on stage, an extensive of props is a given and the illusion of  different realm is enhanced by the use of video mapping and projections, to bring the world to life.

Lego Ninjago & The Realms of Shadows Live! is a permanent fixture in Legoland Malaysia, and will open at the air-conditioned Lego City Stage from Aug 28.

Johor residents can apply for a special pass from now till Sept 30.

Singapore residents can buy an adult pass and get 50% off a child annual pass from now till Oct 31. Those renewing their pass can save up to RM$100 and upgrade their pass at RM$50, from now till Sept 30.