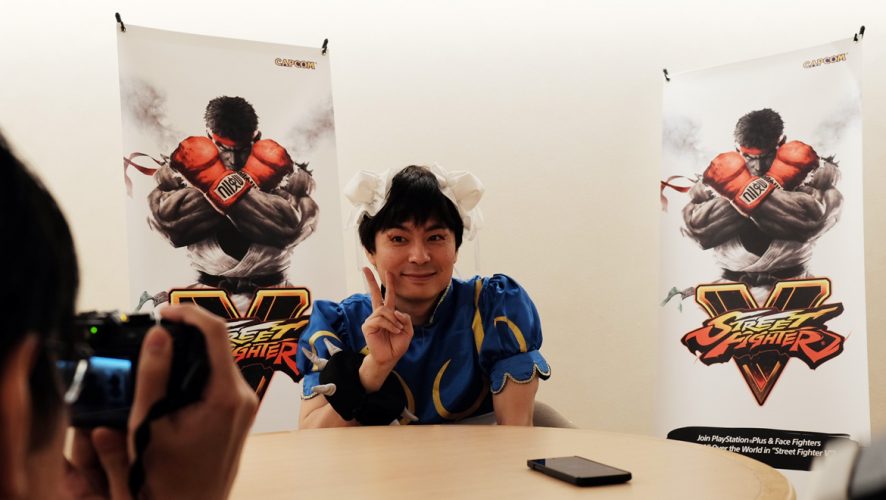 The latest chapter in the ultimate versus fighting game, Street Fighter V, is out right now, so what better way for Singaporeans to celebrate this brand new entry in Capcom’s epic battle royale, than with an elaborate launch party last Friday (Feb 19) in the tropical heat? There was tournament level fighting showcased by Razer’s Xian, Gackt, and Infiltration, as well as a giant boxing ring for people to digitally fight on. And if folks ran out of juice, there were copious amounts of Red Bull for fans to stay powered up.

Most importantly, Sony invited Street Fighter V’s Assistant Producer Tomoaki Ayano down for the launch, and he came dressed for the part, as the ever lovely Chun-Li, to say hi. And it seems that his visit to our sunny shores was not incidental either, as Ayano-san revealed a very Singaporean link to Street Fighter V, in the face of Ho Kun Xian, aka Xian, Singapore’s top Street Fighter player. In the process of developing the game, Xian provided direct feedback that led to the introduction of two new key features in the game, namely V-Gauge and V-Trigger.

Quick recap on Xian: Since bursting into the professional Street Fighter tournament in 2012, Singapore’s very own Xian has taken on some of the best fighters in the world, and either held his own, or taken them down magnificently. His biggest win was taking the top spot at Super Street Fighter IV at EVO 2013. Since 2014, he’s been playing for Team Razer.

“During gaming events prior to SFV’s announcement, we would be getting feedback from professional gamers in the fighting game community from time to time. The most interesting one I got was from Xian. He casually mentioned that in the next Street Fighter, there should be another resource meter that fills up as you take damage that’s similar to Street Fighter IV’s Revenge gauge, but with a different spin.

That got our team thinking: instead of a killer combo, why not have the character power up to heighten their fighting style and traits, or even have a one-shot special to get out of a bind? This led to the eventual creation of the V-Gauge and V-Trigger; players are given more freedom in doing combos or playing defensively when V-Trigger is activated.”

On His Team’s Most Favourite Character To Design

“Among the colorful cast of new and old characters, we felt that we had the most fun designing Vega for SFV. Changing him from a charge character to a motion character who can switch between his claws and hand-to-hand style opened up so many possibilities. This also made him accessible for even the greenest of players to pick him up.

What was even shocking was that there was no backlash. We were expecting it, but this change received warm responses. The community really enjoyed the change.”

On The Cast’s Rather Large Hands & Feet

“We had this philosophy where we make character arms and feet in our fighting games bigger so that they stand out when fighting and when placed in a busy background.

With new consoles and next gen graphics, “photo real” is the biggest key word when it came to SFV’s art direction. The team strived hard to find the right balance in photorealism and Street Fighter’s exaggerated and colorful aesthetics.”

On Catering To The Masses

“Having a tutorial at the start of the game (which expert players can skip), was a big thing for our team to implement; teach them how to use simple attacks, to activate V-Trigger, and to use V-Skill. Survival Mode was also one way for players to practice in an endurance run; if you complete Hell mode with the longest string of wins, you should be good to fight well online.”

READ ALSO:  Geek Preview: Experiencing The PlayStation 5 In All Its Next-Gen Glory

“Two key points actually caused the server issues at launch. First one was because of login issues linked with server connection issues and Fighter IDs. This should be fixed soon.

The second one was because of Battle Lounge. There were a LOT of players coming it at once during the launch period, to the point where we were overwhelmed. This fix was so far taking a little longer than we thought.”

“We can’t say much except for this: he’s younger than his Street Fighter III incarnation, his moves will be different, and his V-Skill will embody his [grappling] fighting style and trait.”

“The keyword in Street Fighter V when creating new characters or bringing back existing ones is ‘reinvention’. We want players to feel that these characters came out from scratch.

Whether these upcoming new characters announced will retain their style of execution (charge or motion), it’s best that we keep it a surprise down the line. We want to make players feel like they’re picking up these recurring characters like they’re brand new. From their redesigns, we want players to discover fresh new combos from them.

That said, we can assure you that one of the upcoming characters Guile will still be a charge character.”

On Ryu Finally Getting Proper Footwear

“It wouldn’t matter what brand of shoes or shoelace type Ryu would wear. Ryu loves training intensively with himself, so at one time he had shoes (like in Street Fighter 1). But they wore out really fast. Any shoes he gets as a gift would suffer the same fate.”

Need a hand with Street Fighter V? Check out this quick guide via GameStart Asia for more info.

Here's one more chance to win a PlayStation 5 this holiday season!

Family fun guaranteed for the holidays.