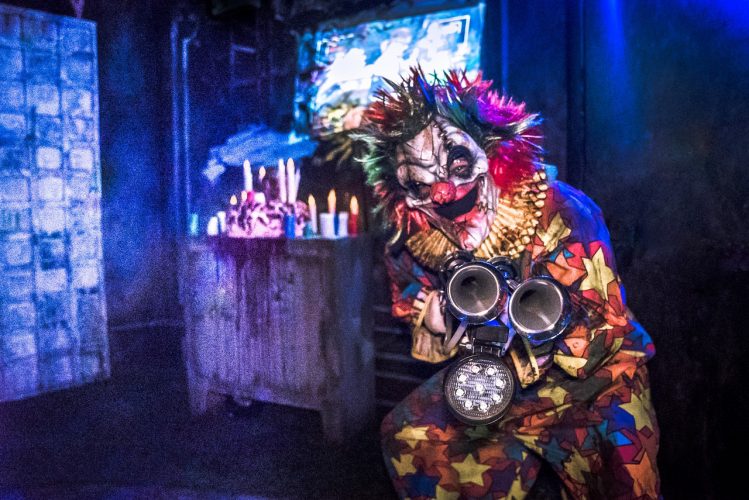 The sixth edition of Halloween Horror Nights (HHN) is happening at Singapore in Universal Studios Singapore once again, and what they have prepared is more than sufficient to get your year’s fright quota filled up.

Like every year before it, HHN aims to be bigger while also following the theme of “the darkness within”. If they mean “can’t see jack when going through each haunted house”, well they pretty much nailed that. But in all seriousness, HHN6 is set to rock the horror quotient this whole month of October.

The leads of the project took last year’s offering into account: the most common criticism was crowd control and long queues. So they’ve rejigged the event’s design and even added a live march to spread the masses. Whether that will work remains to be seen, but it’s a sound plan given how people here love to crowd around big fads.

But enough about that noise: how are this year’s horror houses and scare zones? Which ones are the bee’s knees and which ones tried too hard like the Paranormal Activity and The Purge series? Let’s find out:

*disclaimer: your personal experience may vary. This HHN event is a media preview event, meaning that there’s only a sizeable amount of people checking out the event. When HHN goes public this October, they’ll be swarms of people. The Gory Gist: Basically, a skeleton DJ got lit on fire after playing a bunch of remixes, and Lady Death pops up to open the show. The various back-up dancers, dressed as horrific characters step forward from the mist. We’re still not sure if the awkwardness of this intro is intentional or not. But can someone please tell me how they lit that poor DJ on fire? I mean, yeah, his song choices aren’t the best but that to reason to burn him…..

What It’ll Remind You Of: Supposedly a modern take on that Thriller video, but half-assed. And the giant skull head would look scare, if it didn’t remind me of Skeletor from the Masters Of The Universe movie.

Worth The Visit? This is the reward for being early at the park. This intro is also one of the longest in the history of Halloween Horror Nights in Singapore. At the media preview, the item was still rather raw around the edges, it should get better as the event hits its peak. And do keep a closer look at the flaming DJ.

You can check out the entire sequence here.

Head to 1:15 for some Eurythmics. (Someone at RWS must really love Annie Lennox) 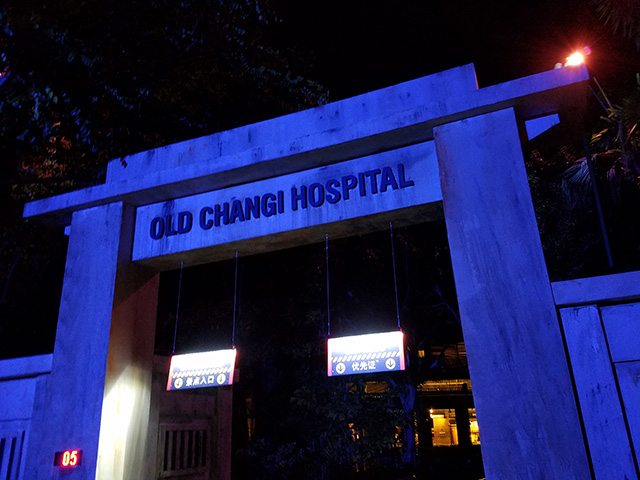 The Gory Gist: The headline event of HHN6, this horror house pits the tenth scariest place on Earth as a sideshow attraction. Part dark hospital area with Pontianaks and deranged patients running about, part mass grave during the Japanese occupation, this spot will resonate well with Singaporeans. I mean, who hasn’t heard about the haunted Changi enclave? 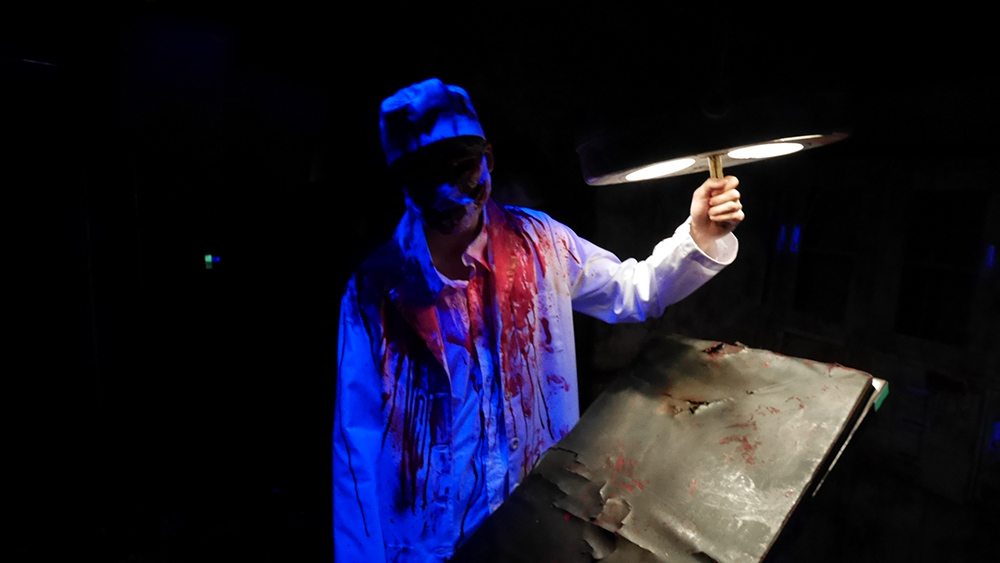 What It’ll Remind You Of: A lot of French mutilation horror films set in hospitals, only without the mutilation. Well, most of it.

Worth The Visit? Yes, simply because of its aesthetics and production values. Hospitals can be creepy places to visit at night, so a haunted one with mad doctors and body parts can be a sight to behold. Miscarriages, mutilations, loud wailings, unsterilized and bloodied hospital equipment – you couldn’t ask for more in a hospital horror house. 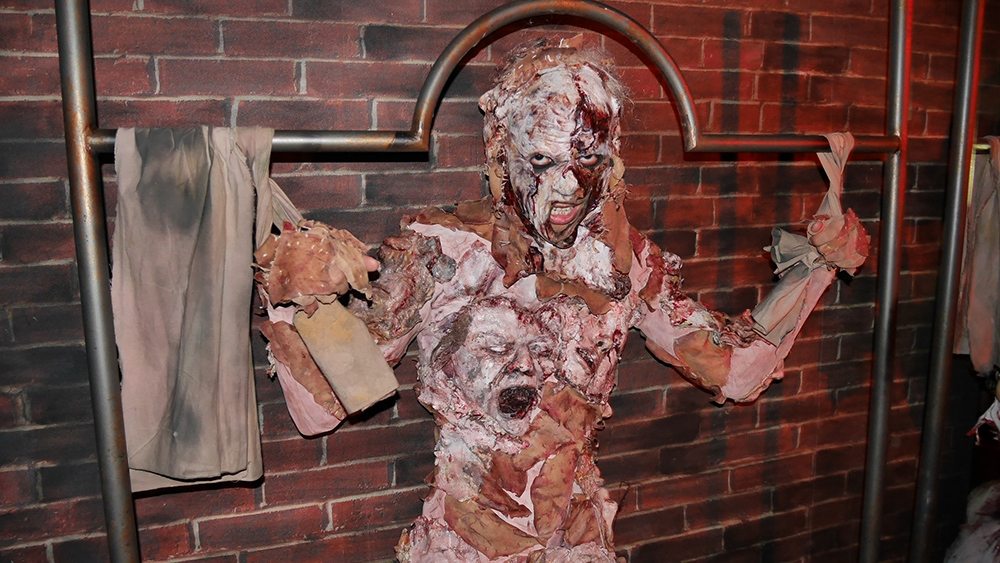 The Gory Gist: So this guy named Damien Shipman, after seeing his family dying in a fire, decides to put up an art gallery. The only problem? This gallery consists of people either half-alive or dead, locked up in cubical display cases for all to see, as well as some guts, people’s heads, and a poor soul in a meat grinder. This definitely ain’t your typical abstract art showpiece. Yes, we know. Visiting boring art shows can make us head burst, but this is a different level altogether.

READ ALSO:  Everything You Need To Know About The PlayStation 5 (So Far) 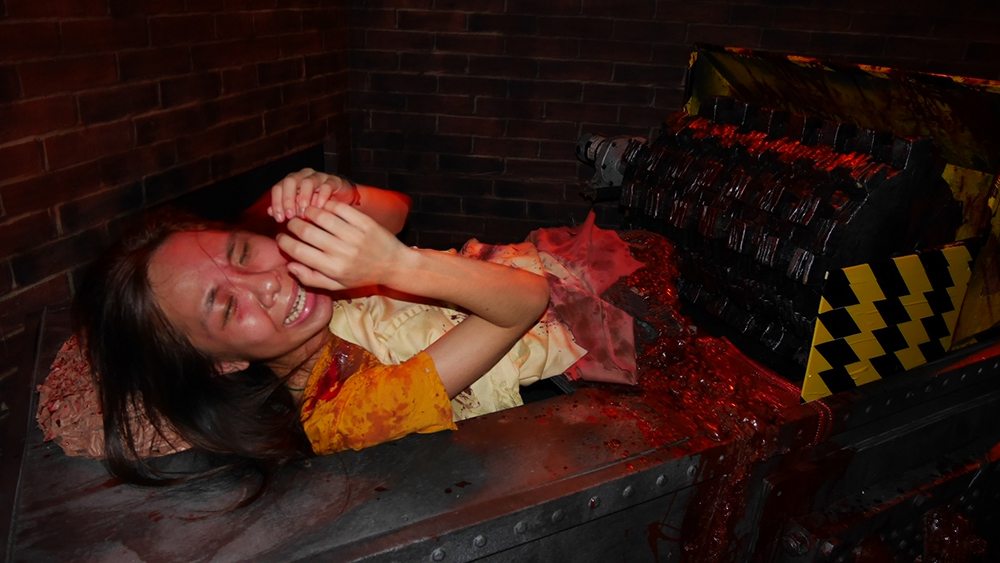 What It’ll Remind You Of: A lite version of a David Cronenberg body horror museum, which should totally be a thing if that one episode of Rick & Morty is of any indication. 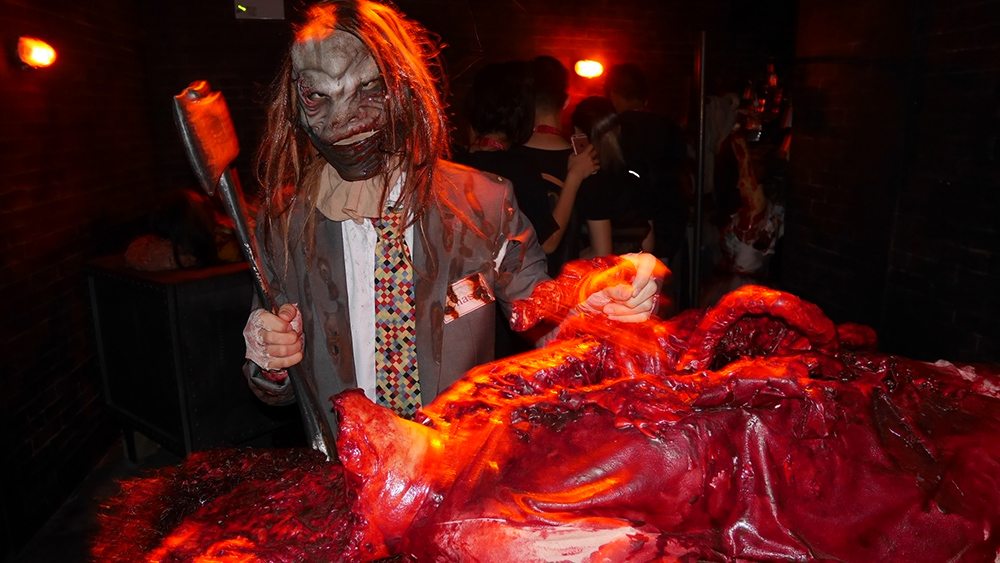 Worth The Visit? Hmm. It’s just a bunch of freaks in boxes, a half-mutilated woman, and a couple of heads and mutilated freaks in bondage. It’s not pushing the right buttons for people who want to see crazy stuff from The Fly (1986 version) and Videodrome. As far as the entire attraction goes, this one had potential to unnerve people and instill nightmares. The bright spot of it all would be the demon carousel which you can stand on WITHIN THE HOUSE! Universal Studio Exec. #1: So we have this Jurassic Park faux jungle area we need to use as a Halloween Horror Night exhibit. I just finished watching The Green Inferno and Cannibal Holocaust back-to-back, so…

Universal Studio Exec. #2: Nah, I don’t think the public would like us to re-enact a ritualistic female castration scene. We don’t need social justice warriors breathing down our necks.

USE #1: We could have zombie T-Rexes and raptors. People still love them Jurassic Park films!

USE #2: Hello?! Even Activision and EA aren’t THAT creatively bankrupt.

USE #1: We just made a huge order of leftovers and hand-me-downs from this region’s Salvation Army just to clear our budget. Let’s just dress our scare actors up in uniforms and old people clothes!

USE #2: Ooh, ooh! We still have those stilts from last year’s space horror scare zone area. Let’s re-use those!

USE #1: “Suicide Forest” has a generic yet easy-to-follow ring to it. Let’s call it a day. God I love our jobs!

What It’ll Remind You Of: The scenario above.

Worth The Visit? It is, but only as a relaxation area with a hint of creepiness. The unobstructed Jurassic Park signs do not help with the immersion one bit though. I will give it kudos points for the stillborns-filled tree and copious amount of moody blue lighting though.

These are one of the few sections where you can take photos, so patrons and visitors: use this opportunity to snap shot as many as you can.

March of the Dead

The Gory Gist: What’s better than a Scare Zone where you can take selfies with the undead? How about one that marches slowly across Universal Studios for everyone’s convenience? Based on the Mexican Day of the Dead festival, the parade is led by a giant skull along with people dressed in all shades of skeleton costumes and mariachi getup. 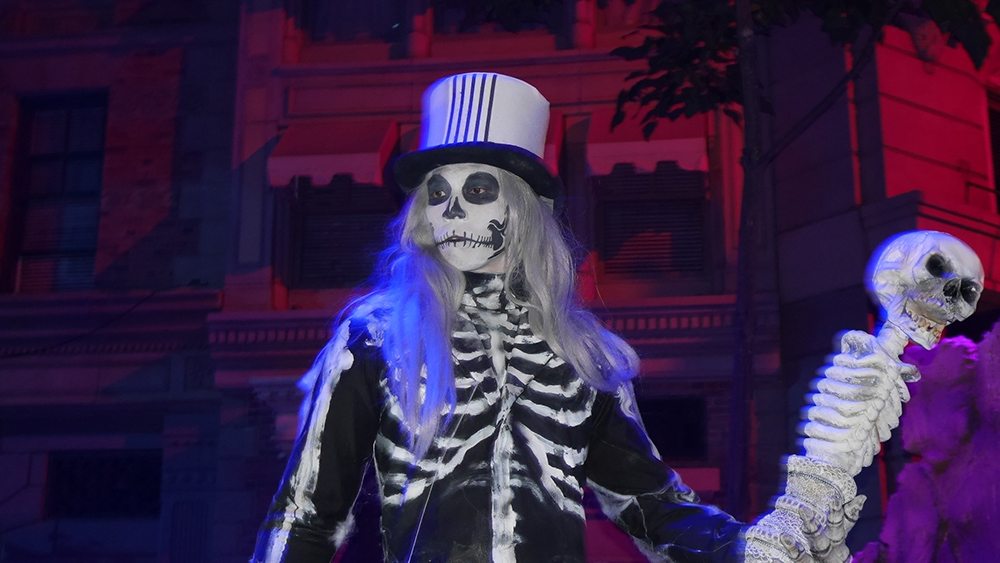 What It’ll Remind You Of: Grim Fandango meets that Disney Main Street Electrical Parade. Or Imagine yourself as an extra in the opening sequence of the latest James Bond film, Spectre.

Worth The Visit? The Death March will eventually pass by your general area of walking. With that said, yes you have to catch it if not for that super-slick giant skull contraption that’s lit like heck.

Even if you’re lazy to chase the giant skull, you can always head down to Universal Studio’s main street area to see the well-decorated Day of the Dead-inspired displays and cabaret dancers. 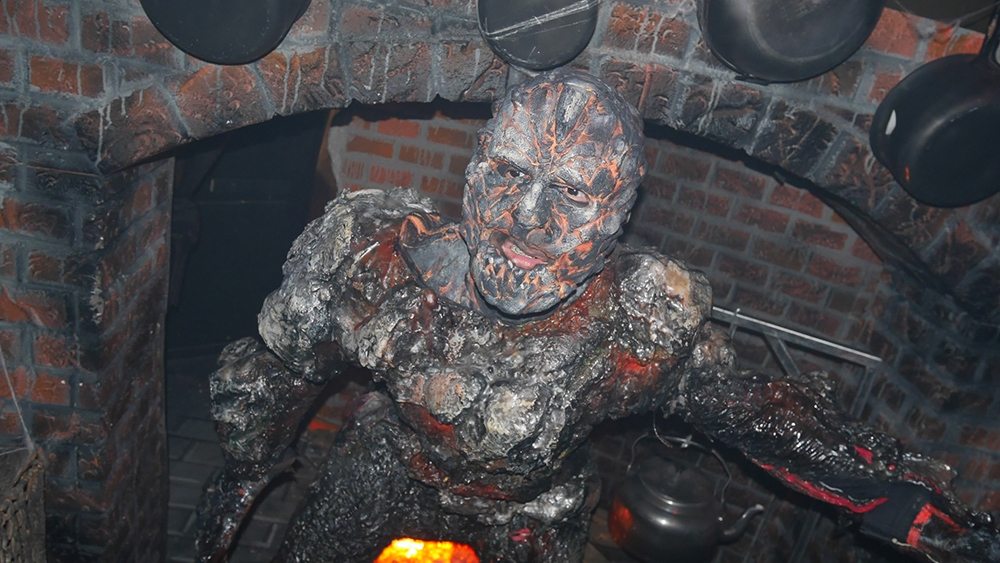 The Gory Gist: Bubble, bubble, toil & trouble, as far as this horror house goes. The HHN team tried out their take of America’s 1600s witch-burning bits of history, but with a stylistic flair. Basically the DeFeo Witches are awakened by wiccan enthusiasts. Shit hits the fan as we get to see the souped-up insides of the house all the way to the woods and caves where gibbering wiccan practitioners are rendered insane. 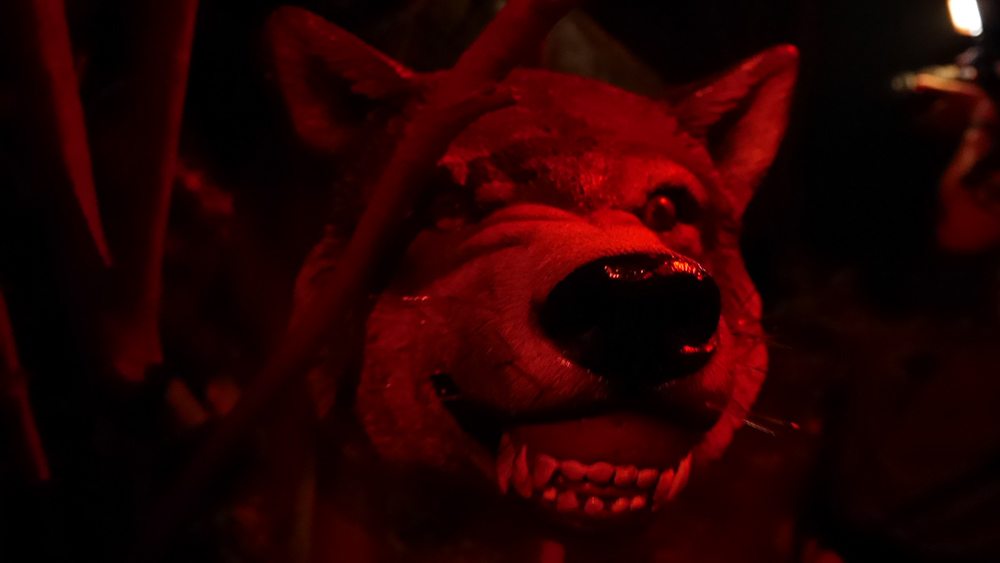 What It’ll Remind You Of: An American Horror Story done in Universal Studios, which may give studio execs an idea on how to approach a remake of the “Halloween classic” Hocus Pocus.

Worth The Visit? This one comes off as expected, as we’re dealing with a PG-13 version of last year’s indie offering “The Witch”. It’s worth a look if you’re into seeing an elaborate version of a 1600 witch coven at its prime.

The most beautiful bit of this exhibit was the incredibly white and bright room featuring the DeFeo Witches, clad in white and in their stylish potion-brewing and tree-caressing poses like as if the occult edition of Elle was within earshot. 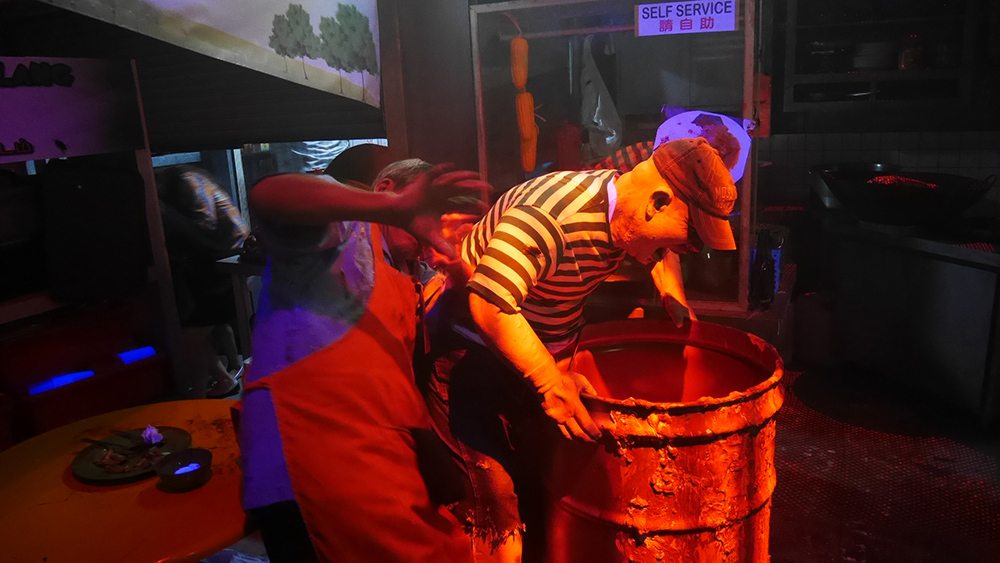 The Gory Gist: THIS ATTRACTION STINKS!!!! No, really. Somehow, the folks at USS have managed to recreate the intense stench of a rotting food centre and its apparent the moment you step into this haunted house. Kudos to the team for recreating something so effectively and i your nose, and stomach can take it, this is the attraction to go for first, and worth revisiting.

A rival hawker centre, presumably selling Singapore’s famous brand of fish soup dishes somehow had radioactive waste within their current batch. Within moments, everything turns to heck. We get to see the aftermath, featuring a crazy chicken rice aunt, zombified flesh-eating customers, and cockroaches. What It’ll Remind You Of: The Health Promotion Board’s wet dream of an ad campaign to force Singaporeans to cook their own food & eat healthy

Worth The Visit? Yes, because this attraction followed the basic rule of “Halloween”-ing up a seemingly-normal setting in Singapore and rolling with it. It pulls no punches with the seemingly-nauseating smell, the random blaring karang guni honking, and a mutated fat guy puking in a giant toxic barrel. They even included a flower shop and bargain basement clothes shop section; this is as authentic as you can get! 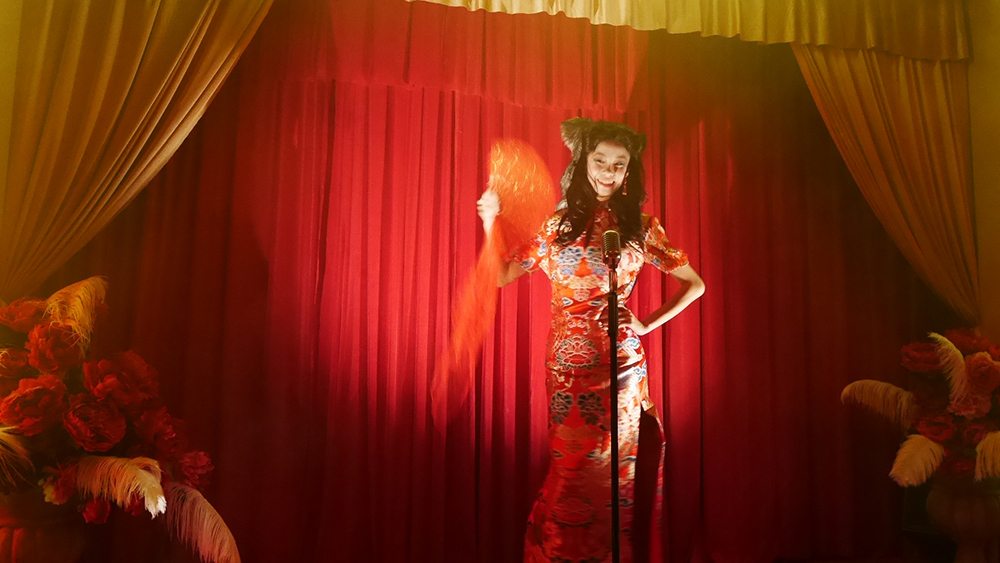 The Gory Gist: Based on Chinese horror folklore, this attraction’s about an inn-slash-brothel that lures victims to its singing and luscious women in cheongsams. The place is run by snake-like demonic shape shifters and spider-people (clearly not from Marvel), so the phallic overtones are about as subtle as a sledgehammer to the face. 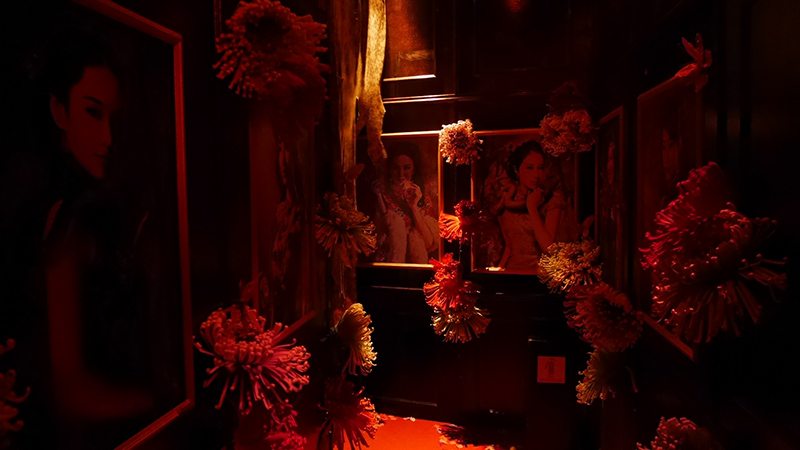 What It’ll Remind You Of: The Tales of the Crypt’s “Bordello of Blood” if it were run by a corrupted version of Fuxi.

Worth The Visit? Yes. We’ve saved the best for last; Hu Li’s Inn is not to be missed simply because of how much of a creepy tone it sets, which then pays off with snakes and spider humanoid hybrids. It blends fairy tale horror and its contemporary setting rather well, with great mood & lighting, a lovely decor, and even a creepy mirror maze all decked in red.

When All Is Said & Done…

…Halloween Horror Nights 6 keyword is “diversity”. And it shows: we’ve got 1600 American horror, local flavor horror (two in fact), Chinese horror, and a tribute to The Day of the Dead. For fans who rather not stick to one horror trope for attractions, this year’s showing is a good deal for them. There’s something for everyone to get their scare jollies from.

Would there be things we want different or improved? Not really, because it’s all well-done and there’s a good variety in the exhibits and scare zones. It’s a challenge to keeps things fresh but Universal Studios Singapore does not seem to have that problem.

But honestly don’t just take our word for it, head on over to Dejiki.com and check out what the true Halloween Horror Nights enthusiast thinks of the event. 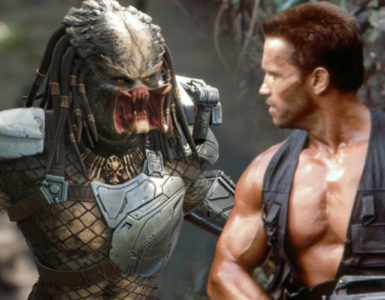 The Austrian Death Machine is back once again for more hardcore adrenaline action. How does he find the game? 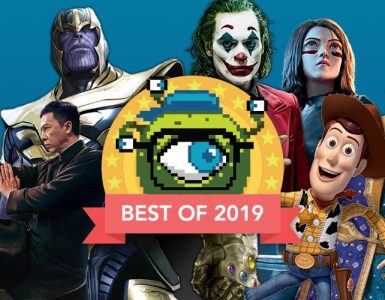