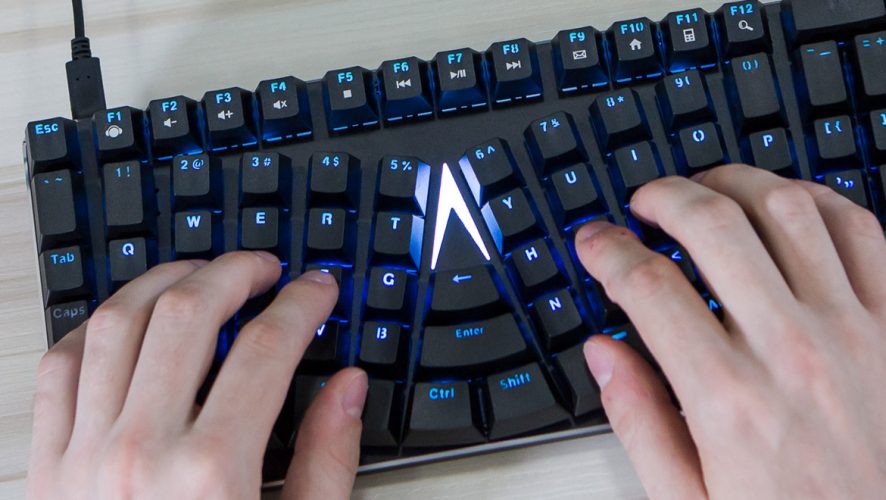 I am approaching this review with some trepidation because while I love keyboards, I am not great with ergonomic keyboards. A few years ago, I foolishly dropped a bunch of cash on an Ergodox, which I spent two hours getting mad at, then never using again.

This time round though, I have promised that I will do this, so I will persevere.

10.50am: Alright, first impressions. Right out of the box, I am having a tricky time with this layout. The X-Bows folks call this a “crossbow radial pattern layout”, which in all fairness, is pretty similar to a regular QWERTY one, just with the letters tilted slightly inward. 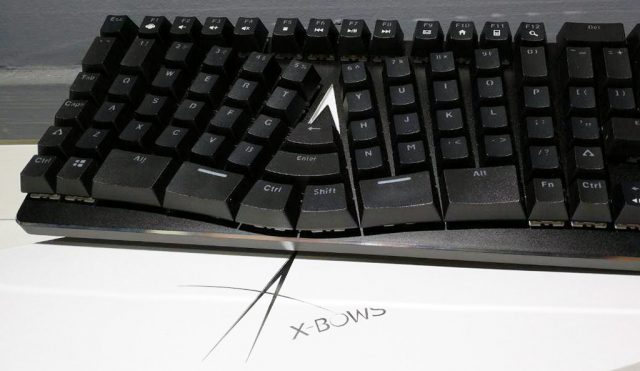 For now, I have to keep looking down when I type. I feel like my father.

11.00am: I have discovered a backspace key in the middle of the keyboard. I discovered this when I accidentally deleted 300 words from the first draft of this review.

11.01am: There is an enter key in the middle of the keyboard as well. This is the reason I’ve been sending out truncated, half-finished messages to all of my friends. 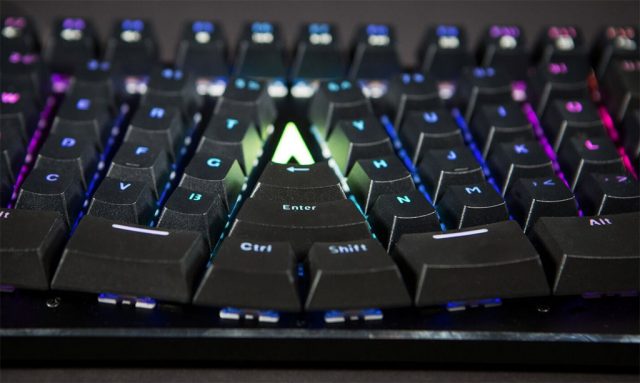 11.15am: I decided to try a Words Per Minute Test. After typing out a passage on Aesop’s fables, I averaged a miserable 37 WPM. This is not good. I really hope this improves over the next few days.

3.20pm: After a couple of hours with the X-Bows, I am pleased to report that things are getting a lot better. I have found that the key is to really, consciously, turn in your hands inward when you type. Because of habit though, my fingers keep drifting back to their “normal” positions, which is a bit of a pain.

6.27pm: I have spent almost a whole day typing on this keyboard now. I feel a lot more comfortable, and my mistake count is way down. It’s still not completely instinctive, but it’s not bad for a day’s work. I hope this keeps up tomorrow.

10.47am: I am pleased to report that I haven’t regressed! I’m still learning to type, but it feels a lot less unnatural than it did yesterday. My WPM has risen to 47. If this keeps up, I think I’ll be able to hit a passable 60 WPM by the end of the week.

Now that I’ve kinda gotten used to typing, let’s talk a little more about the keyboard. 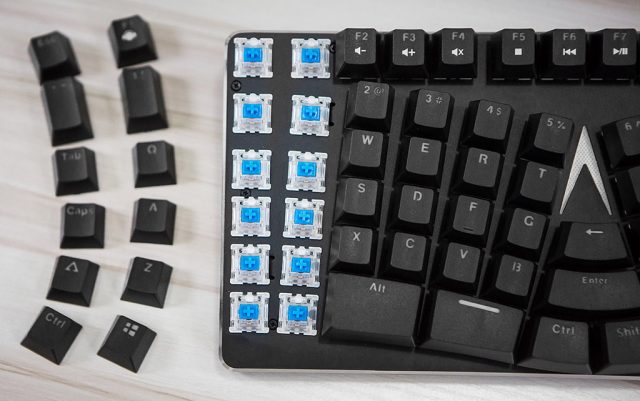 Layout-wise, it’s certainly unique. The Standard X-Bows sits somewhere between a Tenkeyless and a 60 per cent, with two-thirds of a home cluster (it’s missing Home and End), and tiny Shift keys. It’s got a full arrow cluster though, which I really like, as many compact keyboards tend to sacrifice this.

The board comes with floating keycaps, which are great for letting through the keyboard’s customisable RGB lighting. Because of the keyboard’s unique layout, swapping out keycaps will be a challenge — you could probably change the letters, numbers and function keys if you really wanted to, but definitely not the modifiers. 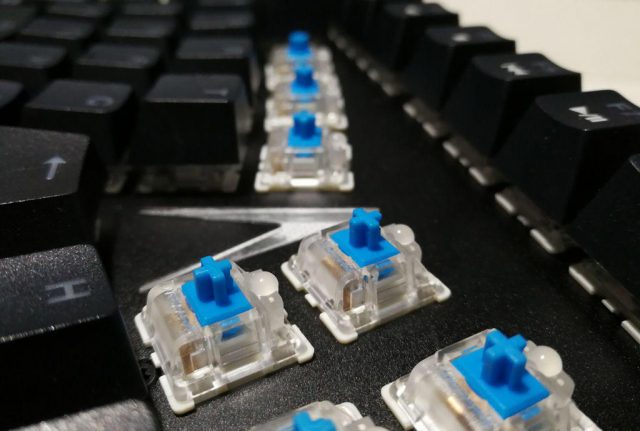 As for switch choices on the Kickstarter, users can pick either Gateron blue, red, blue, black and brown. My review unit comes with Gateron blue switches, which are pleasingly lightly and clicky.

The keyboard is anchored by an aluminium alloy base, which makes it considerably lighter than most standard mechanical boards. When I popped it on the scales, it weighed in at 685g (without cable), considerably less than something like a Filco Majestouch 2 (1.2kg). Despite its flyweight body, the X-Bows feels quite sturdy, and not filmy or hollow.

6.47pm: I just got home to the strangest thing! After a whole day of typing on the X-Bows, I cannot type on a standard QWERTY keyboard anymore. I feel like I’m typing correctly, but everything that comes out on screen is gibberish! What is this black magic.

Lesson learned: Keyboards are like drinks; it’s best not to mix them.

10.30am The X-Bows has become the new normal. My speed on this is now 56 WPM (pretty much back to normal) and it feels just as comfortable as typing on a regular keyboard. 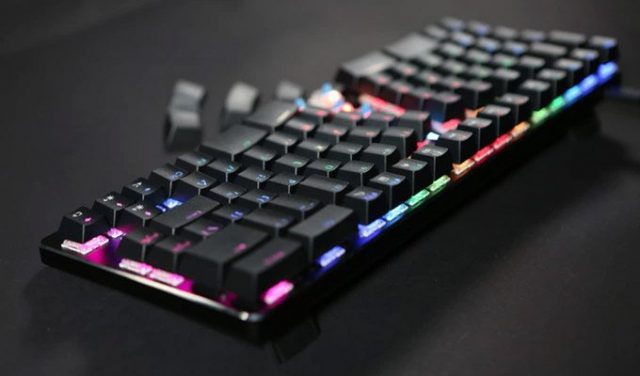 1.00pm: One thing I’m still missing though are the Home and End keys. When they keyboard is released, there will be software that allows you to reprogramme the keys. The software is not ready on the review unit, so for now, I’m learning to live without them.

I do like the keyboard, and I’ve gotten quite used to it. But to be perfectly honest, the ergonomic tilt of it hasn’t made a massive difference to me. I suspect that the it’ll take more than a week of use to see a noticeable change. Plus, I’ve never really had an issue with the straightness of a regular layout anyway, so maybe I’m not the X-bows’ target audience. 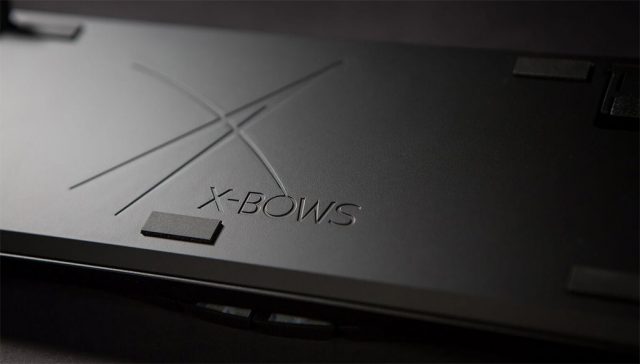 For people who experience strain in their forearms or wrists though, this is definitely worth checking out. This is also a good stepping stone for users who want to painlessly transition to a full-on ergonomic layout.

The X-Bows Mechanical Ergonomic Keyboard is currently on Kickstarter, so head on over to pledge your support if you want it by the end of this year.