Geek Review – Teenage Mutant Ninja Turtles: Out Of The Shadows

For some reason, Hollywood decided to make movies out of talking turtles named after Renaissance period painters, but it took 26 years until film producers decided that it was a good idea to add in live-action versions of the esoteric villains from the 1987 animated Teenage Mutant Ninja Turtles series.

And to finally see them on the big screen brought a warmth in me. This is the movie TMNT were owed after sitting through the abomination that was Teenage Mutant Ninja Turtles III. The scenes featuring antagonists Bebop, Rocksteady, and Krang will make fans old and new rejoice.

The plot is simple. The Turtles, along with lovely April O’Neil (Megan Fox, who seems to give almost her all as a likeable human ally) try to stop Shredder (Brian Tee) and his Foot Clan from escaping a prison van. Alas, they fail because he had help from Baxter Stockman (Tyler Perry, upping the geeky mad scientist archetype further) and his scientific knowhow. He accidentally teleported Shredder to Commander Kraang’s (Brad Garrett) hideout, and they make a deal. Shredder needs to find two of the three technological Macguffins, and piece them together. This allows Krang to summon a world-ending device – yes, it’s the Technodrome- to rule over Earth.

So it’s a race against time as the Turtles, with the help of ex-cop-turned-vigilante Casey Jones (Stephen “Oliver Queen” Amill), attempt to chase down and stop Shredder and his gang, while at the same time settling their teamwork issues. Oh, and Shredder gets extra muscle by transforming criminals Bebop and Rocksteady into the mutant warthog and rhinoceros we know and love from the cartoons.

Some may view it as forced, but the camaraderie between Bebop and Rocksteady is a highlight, like watching two amoral goofballs tear stuff up, and be big dopes. Audiences can’t help but laugh with them because of it. Tyler Perry is also all shades of weird as the scientist Stockman, but it works here.

The four Turtles fill their archetype roles just fine: Leonardo leads, Donatello does machines and performs feats that can make MacGuyver question his ingenuity. Raphael’s still the hothead, just like his comic and 2003 animated series counterpart, though he shows a bit more dimension to his supposedly cardboard cut-out personality. Michelangelo is the (slightly pervy) party dude, with a hint of Jersey Shore dude/bro-ness injected into his deformed face.

Side characters-wise, it’s nice to see Stephen Amill act all loud and brash, with his New Yorker-like attitude projected into his former cop-getting-to-the-bottom-of-this escapade. Will Arnett is just being a PG-rated version of himself, acting as the supposed city hero, taking all the credit through an under-wraps deal.

But that’s okay, because all this light story fluff is at least served together with over-the-top action and escalated pacing. Nothing’s ever dialed down, from the prisoner van hijacking, to the section down south in a jungle setting, all the way to the obligatory final showdown. You can put away your suspension of disbelief, since all these scenes walk the fine line between comedy and action.

I have to remember that I am not within this film’s new age demographic, so be warned that the film’s frenetic pacing may not be for everyone. This sequel is lighthearted and full of juvenile humor, laced with some risque bits involving Fox and schoolgirl outfits. The dialogue and comebacks are straight out of a Saturday Morning cartoon show.

The big crime to Turtle fandom is the portrayal of Shredder as an actual threat. The previous writers probably downplayed him here, due to his bigger role in the first film, but he’s all talk and his comebacks come off as unintentionally dry rather than sinister. And just when you think he’s going to go all fight-crazy like in the 2003 animated series, he gets written off.

Alas, Krang gets a very short screen time, but he makes quite an impact in the finale, so it balances out. Even though the movie is clearly aimed at a younger audience, it could stand to have some slow moments amidst its nostalgia-pandering elements. At the very least, it has some semblance of heart and effort injected into its hour-and-a-half screen time.

This sequel is flawed, but it is an entertaining popcorn-laden ride, particularly if you’re a big heroes in a half shell fan. At best, it is a love letter to old-school fans, and at worst, a guilty pleasure.

My one major quibble? Why did no one decide to invite Vanilla Ice back for this pizza party?

Bottom line, Teenage Mutant Ninja Turtles: Out Of The Shadows isn’t reinventing the superhero comic book movie genre, but it’s fine being the party dude among its higher-calibre peers. 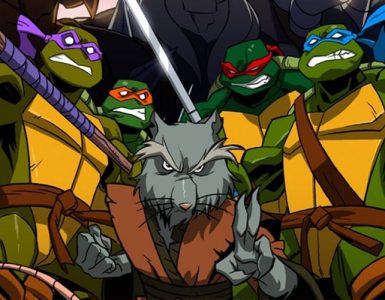