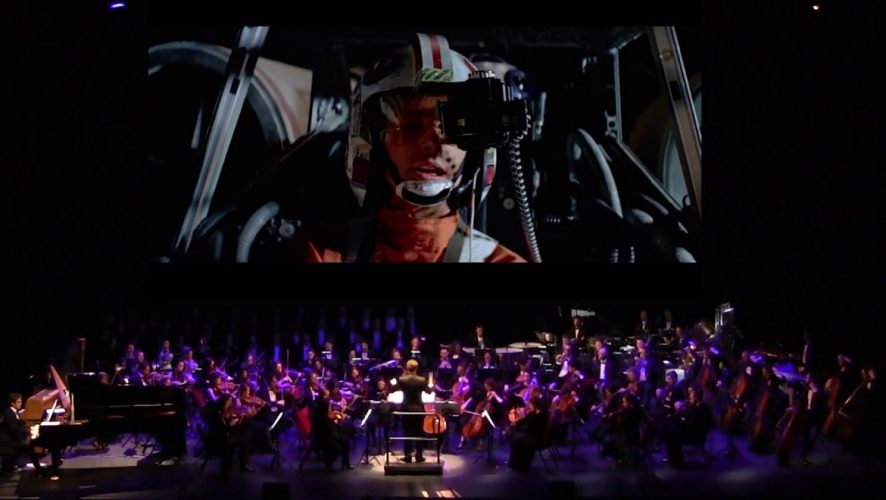 If you feel that watching Star Wars (we’re talking the classic, original, non-prequel, and definitely none of the current sequels) on Blu-ray is too mainstream, try watching it with a 70-piece live orchestra playing the soundtrack. It is legit date night material, and is the premise of the In Concert series, where the movie plays with an isolated audio track with dialogue and sound effects, and the soundtrack is performed in real-life.

This is Episode IV aka A New Hope, the one that started it all, and the music in it will go down in history as some of the best ever composed. 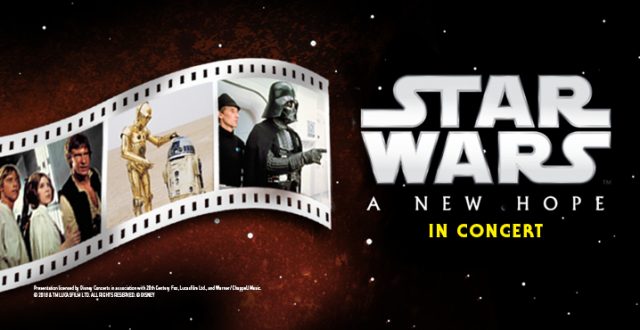 Yes, you’ve got iconic visuals such as the lightsaber duel, classic quotes like “I’ve got a bad feeling about this”, and unforgettable action sequences like the Death Star trench run… but I’d wager that most people will think of the music when you first ask them about Star Wars.

The concert starts off strong, with the 20th Century Fox fanfare (which will definitely draw some applause), and then the cheering really begins with the blasting horns of the main theme. Just so we’re clear here – the orchestra plays all of the movie’s soundtrack, but not the music that takes place within the movie, so don’t expect a live rendition of the background tunes at the Mos Eisley cantina.

Hearing the music played live is definitely spectacular. It’s so powerful, so iconic, and seeing so many musicians making magic together will stop you in your seat. And these guys were good. For the entire two hours of the film, they played the music perfectly, without a single note out of time or tune. The only change is a tweak to go into the 20-min intermission when the heroes first enter the Death Star.

There are so many musical moments in the film that will tug on your heartstrings, and hearing the music played live definitely adds a significant amount of gravitas to the moment.

Like when Luke throws a hissy fit at dinner and storms out of the farm to watch the binary sunset on Tatooine, and the strings kick in over the brass… That was a moment that floored the entire audience.

But immediately after the rousing main theme and opening text crawl, something happens that makes the this concert seem a little bit off.

There are sound effects, so you hear the turbo lasers from the Star Destroyer firing off at the Tantive IV corvette. Then you hear C-3PO and R2-D2 bickering each other as the rebels prepare to be boarded.

Between the action on the screen and the dialog, you’ll find your attention quickly shifting away from the music. Also, because the music being played is exactly the same and synchronized perfectly to the action on the screen, you might find yourself forgetting that you’re watching a live orchestra. At times, it’d feel just like yet another rewatching of a beloved movie.

Will it be better if the soundtrack was muted except for the music? Maybe, but maybe not. There are a few sequences in the film where there is no music (like after the heroes infiltrate the Death Star), and this would be really boring if you were just watching a silent movie, with 70+ musicians sitting around awkwardly on the stage.

If you edit out these sequences, and only screen the bits with music in them… would the audience be satisfied with only 80% of the film being screened? If you assume that some of the audience aren’t super-fans who know the movie by heart, it’d be a jarring and confusing experience for them.

Also, remember that this was music specifically composed to accompany the visuals, and it was never supposed to work on its own.

Anyway, just something to think about, but it’s not a bad thing either way.

Watching the musicians perform the score gives you a better appreciation of the music. You’ll start seeing just how much violins are featured in the soundtrack, and you’ll realize how synonymous the harp is with the Force because the harpist will be busy anytime Obi-Wan talks about energy fields or other mystical wonders. Before this concert, I didn’t even realize there was a harp in the soundtrack.

Is it worth it?

With ticket prices starting from S$69, it is not the most affordable way to enjoy a screening of Star Wars. But if you’re taking someone special out for a nice evening, a concert like this is certainly worth considering. If you’re willing buy costly concert tickets to watch your favorite bands play the same songs you’ve heard repeatedly on Spotify, then why not Star Wars?