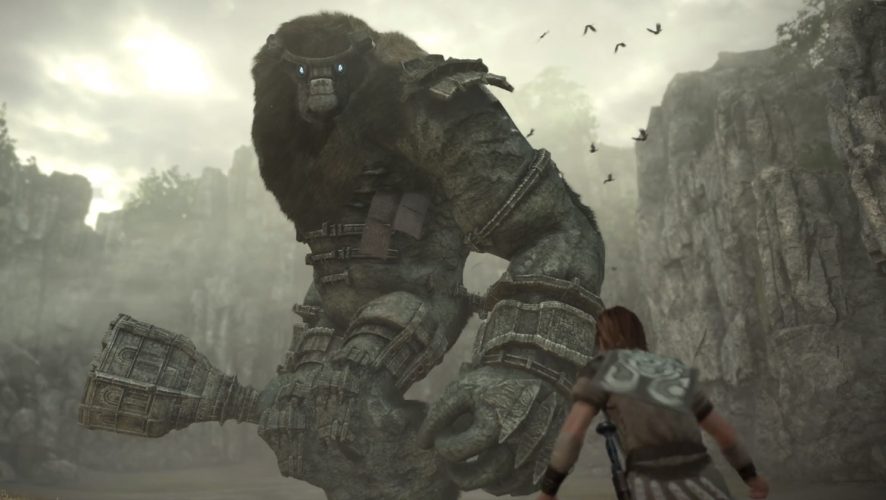 Geek Review: Shadow of the Colossus

Shadow of the Colossus opens with no explanation at all. A young warrior named Wander travels to the Forbidden Lands on horseback in order to resurrect a girl named Mono. Dormin, a mysterious voice presiding over the Lands’ central Shrine of Worship, gives Wander a deal: if he can slay the sixteen colossi that reside in the Lands, Mono will be resurrected. A fair deal, no?

Between slaying the first Colossus and the sixteenth, nothing really much happens in terms of plot or story progression. There doesn’t need to be. You are carried through the game purely on a wave of emotions. The joy of taking down your first Colossus is then tempered with sadness each time you have to do it again. What have they done to me? Do they deserve death so I can save a loved one? Of course, the game has a beginning and an ending but everything in between is what you make of it. Everybody who plays this game will have a different perspective of what happened and their own personal story to go with it.

Gameplay in Shadow of the Colossus is just as sparse as the story…which is no bad thing. It basically boils down to sixteen boss fights with all the fat cut out. You travel from the Shrine of Worship to where the targeted Colossus is hiding. As you travel through this beautiful open world, there is nothing else to do. The world doesn’t contain any side missions, other enemies to fight or even other characters to talk to. This is great! Certain publishers should take note that you can have a big open world without a glut of content and it can still be an enjoyable place to be. Then, once the Colossus has been located, the fight begins…

For each fight, you need to work out how to get onto the towering beasts as they stand before you which can be tricky later on. Once this little puzzle has been solved, you need to find the weak spot and jab your sword into it. Several times. While all this is going on, you have to watch your stamina gauge. Holding on for dear life on the side of a 30-storey monster takes some strength. You need to quickly map a path to a safe spot where you can stand and gain your strength back. If not….it’s a long way down.

The controls and camera during fights can lead to some frustration as things can get a bit wonky. You won’t jump when needed and the camera will get stuck once in awhile. This usually only happens when you are standing up close to something and the camera has nowhere to go. However, the controls are still much more responsive than the original setup, even with said flaws. In fact, there is an option to have the original controls…don’t do it!

The look of the game has always been its strong point. The PlayStation 2 version was a technical masterpiece and the PlayStation 3 version was a nice upgrade from that. The PlayStation 4 continues this trend. The game looks better than ever. The rolling hills, the ancient ruins and the Colossi have all never looked better. Running on a new engine Bluepoint developed for this remake,  it allows for some truly breathtaking moments and gloriously detailed scenes. On a regular PlayStation 4, everything runs at a locked 30fps at 1080p, while the Pro has a couple of options. Disappointingly, there is no true 4K mode. Instead, Pro users are treated to a locked 30fps at 1440p, which still produces a wonderful image on full HD and 4K screens. The second option for Pro users allows the game to run at a locked 60fps at 1080p allowing a silky smooth experience when fighting those huge Colossi.

A new feature added to make use of the gorgeous look of the game is a photo mode. You can snap a picture at any point and add different filters and then do what you want with the pictures. It will be interesting to see what dedicated fans can come up with as there are some stunning vistas in the game.

All in all, Bluepoint have nailed this remake. They are a studio who knows the source material very well and have upgraded it to perfection without losing any of the charm from the original 2005 release. Bring on the Ico remake next! Or maybe they should do Last Guardian instead?

Shadow of the Colossus was reviewed using a PS4 Pro running on a 4K monitor.

An amazing recreation of a PS2 classic. Beautiful to look at and play, and with a story that only gives what you put into it, this is the way games should be.