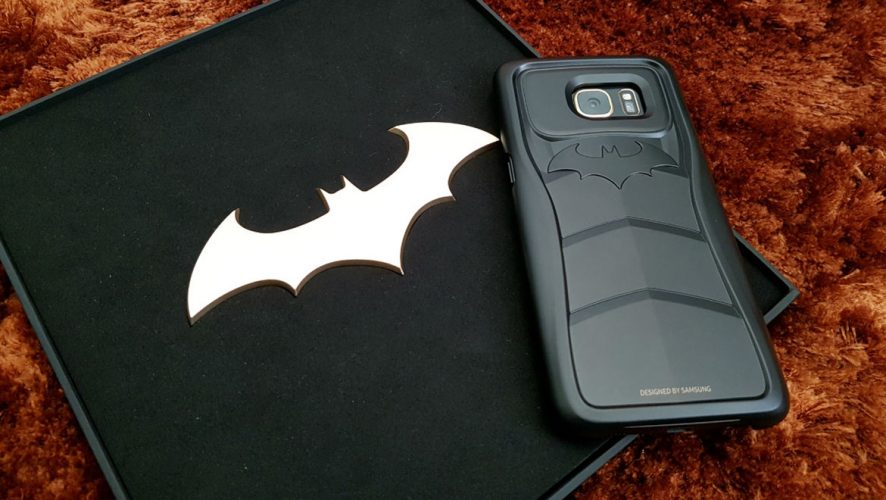 An Android smartphone that’s sure to generate unmeasurable amount of envy among Batman fans, the Galaxy S7 edge Injustice Edition is Samsung’s love letter to the geek community. Launched to commemorate the third anniversary of the video game, Injustice: Gods Among Us, this limited edition Batphone is arguably the official phone of The Dark Knight himself. If you are thinking, “Where does he get those wonderful toys?”, wait till you see what’s in store for you in the Injustice Edition.

Unboxing this Android smartphone is unlike any other. For one, we had to resist spending every second admiring the gold text and the Batman insignia emblazoned on the box. But once we got to the actual act of unboxing, the heart just couldn’t help but beat faster. One can only imagine the absolute glee we felt when we lifted the lid and laid our eyes on the famed Batarang, adorned with a coat of gold that tugs at your very geeky heart. While the Batarang is removeable, you are highly advised against using it for target practice. Leave that to the real Batman. But at the very least, you can fondle the Batarang and admire the intricate design, and place it among all the Play Arts Kai Batman figurines you’ve amassed over the years.

A gadget worthy of Batman

As much as it pains us to put the Batarang aside, we knew what awaits will blow our minds even more. It’s not the thought of a brand new Galaxy S7 edge that excites us though, since we already took it out for a spin when we first reviewed it. The hardware sticks to the tried and tested formula, which includes an amazing camera that sees very well in the dark, and a clear, friend-on-the-eye 5.5-inch Super AMOLED screen. 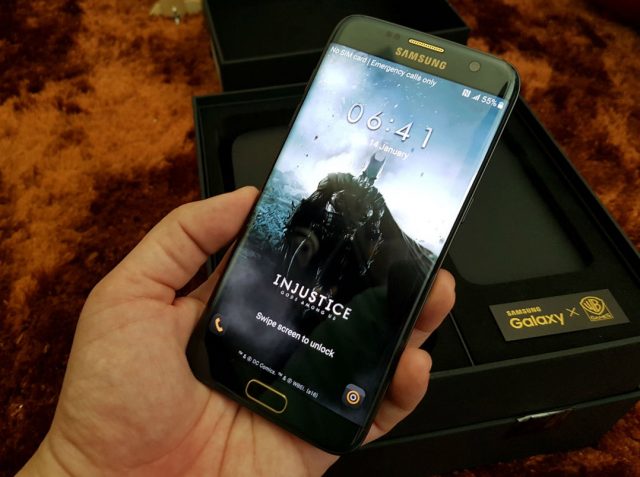 Instead, it’s the deep onxy black colour of the phone drew us in like the mysterious nights that Batman spends in Gotham City. Make no mistake, once you set your sights on the Galaxy S7 edge within this box, you won’t hanker for other phones. This version is cast entirely in black, though we wish that the power cable did too. Alas, it’s in disgusting white, like the Joker’s face.

A dash of gold on the home button and border surrounding the camera adds a touch of class to the phone. The Batman insignia feared by criminals across the world is marked on the rear of the phone, giving you even more street cred if you ever want to pass off as Batman. The amount of aesthetic makeover here might seem basic but it’s worth noting that you can’t replicate the colours and design of this phone. The onyx black colour is by far our favourite scheme, and it’s only available for this limited edition.

Dive deeper and you’ll find more exclusive designs that will wow your senses. Even the always on display mode shows the Batman insignia, together with an imposing image of Batman when you’re on the unlock screen. Samsung knows how to satisfy the geeks, especially with an exclusive theme that includes little nods to the Caped Crusader. Icons such as the apps drawer is modeled after Batman’s mask, while the dialler resembles the torso portion of Batman’s (almost) impenetrable armour. 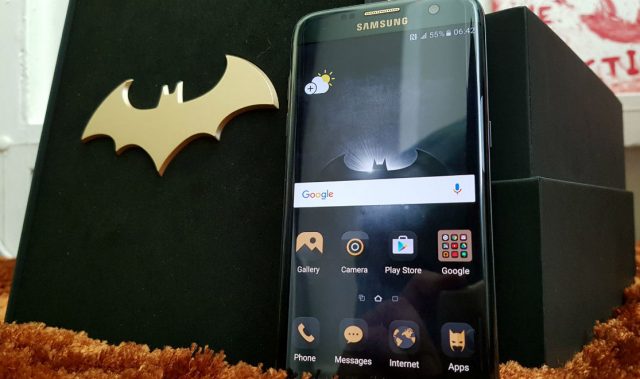 Speaking of that, another homage to Batman comes in the form of the included phone cover. Being an armour for the phone, it makes sense for the case to take on the look of Batman’s armour too. While some might argue that slapping a cover to a phone hides the very design that you bought, the armoured case creates that sense of strength and invincibility to your otherwise awesome phone. 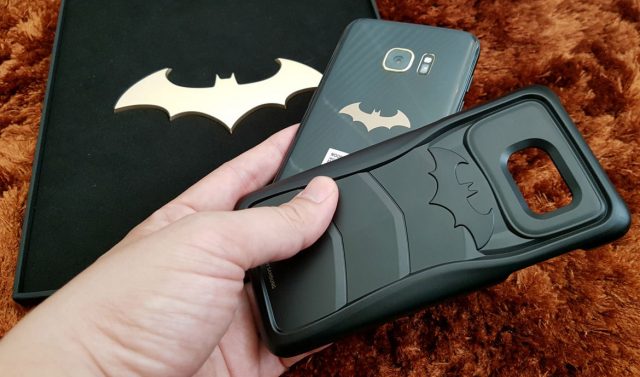 The Injustice Edition also comes with a Gear VR headset. In line with the theme, the headset is black instead of the normal white colour. Likewise, the headset, a collaboration between Oculus Rift and Samsung, has the exact same hardware as the normal version. Unlike the phone, the only semblance of its homage to The Dark Knight is the deep black colour. An afterthought would be to stick a pair of plastic Bat ears to the headset but in the end, we felt it might be a little too tacky. 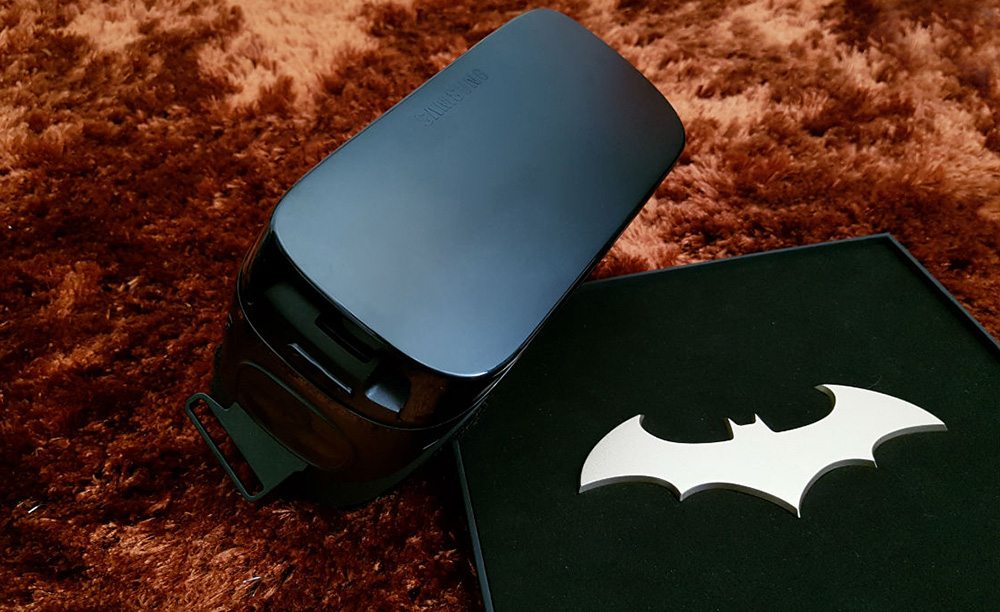 That said, there’s a US$50 voucher to redeem Oculus Rift games. This comes in useful if you redeem games such as EVE: Valkyrie to train your aiming skills and imagine it’s actual training you do within the Batcave. And face it, Batman also needs to hone his fighting skills. Playing Injustice: Gods Among Us on the Injustice Edition is made even better with the US$100 Batman Prime Pack that’ll give you an edge in the game.

The black colour theme is apparent in this Batman phone, but one thing that sticks out like a sore thumb, like a clue that The World’s Greatest Detective will never miss, are the earphones and charger. Both accessories, by assumption, would also follow the same black design but alas it sticks to the white colour scheme of the normal Galaxy S7 edge. Our advice – go get a pair of black earphones to complete the look, and leave the Joker-styled white earphones at home.

The Samsung Galaxy S7 edge Injustice Edition is not your run-of-the-mill Android smartphone. Like all limited edition collectibles, there’s no telling if there’s enough stock to satisfy all the geeks who yearn for this. 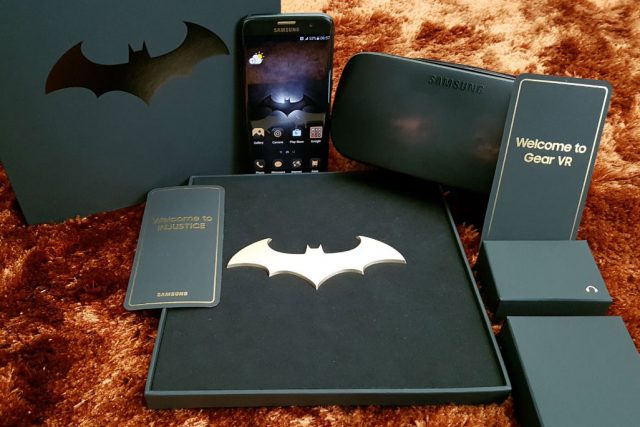 The only thing that might separate a geek from this phone is the price tag. At S$1,688, that’s quite a bit of cash to pony up. But considering that us geeks spend an insane amount of cash on figurines, toys and other unmentionable geek stuff, the S$1,688 price tag for the Batman phone isn’t that hard to swallow.

Plus, consider the fact that you’re not just getting a Samsung Galaxy S7 edge in a limited edition black onyx colour. The whole package includes a Batarang, a Batman armour smartphone case, an immersive VR experience with the Samsung Gear VR and vouchers worth US$250. Altogether, that matches the cost of the Injustice Edition, no reason to say Samsung is overcharging you for that geek satisfication.

The biggest injustice you’ll do is to ignore this Batman phone. Right that wrong, bring it home and get looks of envy from your fellow geeks when you show it to them.

The Samsung Galaxy S7 edge Injustice Edition might not be the phone we deserve, but it definitely is the one we need right now. 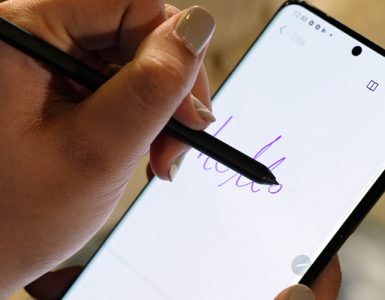