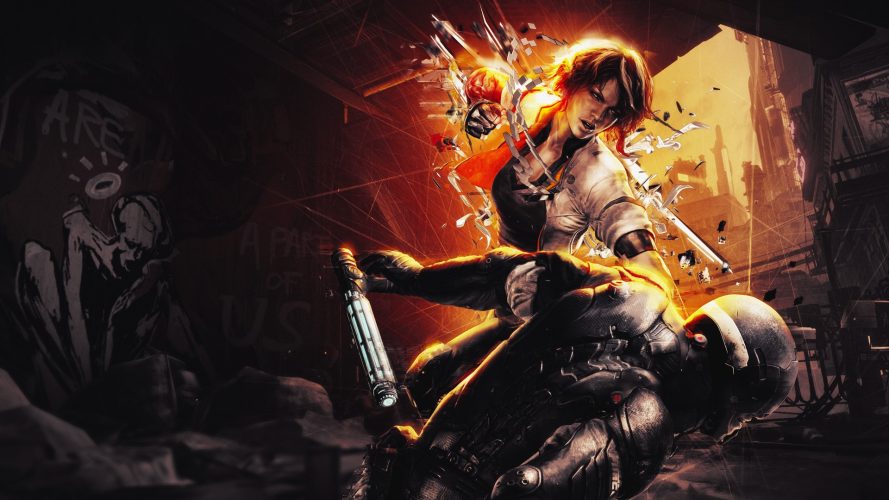 This article contains some mild spoilers about Remember Me. You have been warned, geeks!

Remember Me was one of those games that flew under the radar upon release. Developed by relatively unknown French studio Dontnod Entertainment, the game was formerly known by the name Adrift and was meant to be a PlayStation-exclusive title. Reportedly cancelled, Capcom acquired the rights to the game in 2011 and development on the game continued.

Keeping in line with the theme of memory manipulation, the game was re-christened Remember Me and released for PC, PlayStation 3 and Xbox 360 in June 2013. The game is currently FREE on the PlayStation Network for PS Plus subscribers till the end of February 2014. We figured then, that this was a good time for a (admittedly overdue) review.

Remember Me takes place in the year 2084, in a futuristic version of Paris, aptly named… well, Neo-Paris. In this dystopian city dominated by memory-manipulation technology, a war is brewing between the mega-corporations behind this lucrative (and invasive) technology, and the people who refuse to be subjected to it.

The player takes on the role of Nilin, a “Memory Hunter” – a skilled outlaw with the ability to access and manipulate the memories of just about anyone. At the start of the game, Nilin has been imprisoned and her memory has been partially wiped, and as such she has no idea how she ended up in jail. Naturally, she stages a prison break with help from an unexpected quarter, thus setting the events of the game into motion.

I will not give away too many plot details here, as there are some genuinely interesting storyline twists to be found in this game.

It is up to the player to uncover the mystery behind Nilin’s incarceration by restoring bits and pieces of her own memory over the course of the game’s 8-10 hour length.

I was pleasantly surprised that the game does a good job of delving into the ethical concerns behind the ability to peruse and alter the memories of people on a whim, as well as the effects of such technology on our society should it become widely available.

Clearly, the developers have drawn inspiration from many works of modern cyberpunk fiction. The corporation known (rather unimaginatively) as Memorize has a constant, Orwellian presence throughout Neo-Paris, while the concept of memory alteration evokes similar ideas from popular culture such as The Matrix, Dark City, and Ghost in the Shell.

A View to a Kill

Remember Me has some incredible art direction, especially in terms of level design. The city of Neo-Paris is beautifully realized, and I can only say that it is such a shame that the game is linear and does not allow for exploration.

The game is constantly pushing you forward along a predetermined path, and the ever-present objective marker serves as a stark reminder of that.

The level designers have done an amazing job injecting a believably futuristic aesthetic into classical Parisian architecture. Stereotypically futuristic elements like neon signage and holographic billboards somehow do not seem so cliche when juxtaposed against the backdrop of cobblestone walkways and wrought iron street lamps.

Remember Me’s gameplay rarely takes place at street level, and the game makes great usage of verticality. Nilin is always working her way upwards or downwards in order to reach her objective.

Since the game is supposed to depict a dystopian future, not everything is as perfect as it seems. Remember Me takes it’s protagonist to a variety of locations that exposes the rot festering beneath the brilliant, polished sheen of the city. A high-tech prison, an abandoned subway network, and a dilapidated slum serve as excellent contrast to the glossy, immaculate facade of Neo-Paris.

Character and enemy design, while not nearly on the same level as the environments, are adequate and fit the setting well. Among all the named characters, Nilin is the most striking in terms of appearance. Her mixed heritage, as well as her surprisingly practical wardrobe, clearly set her apart from other NPCs in the game.

Enemies generally fit into 3 main categories: There are your typical private security troopers in various configurations of armor, and mutated “Leapers” – unfortunate citizens whose minds have succumbed to the ravages of memory alteration and now live like scavengers, prowling the slums and sewers of Neo-Paris for unsuspecting victims.

Robotic constructs make up the 3rd archetype, and their presence actually changes up the game significantly, as Nilin cannot hope to prevail against them in hand-to-hand combat and will have to engage them via other non-direct means. The game does a decent job of throwing new enemy types into the mix at various points in the story to keep you on your toes.

While the storytelling and presentation in Remember Me are commendable, the game falters somewhat when it comes to core gameplay.

The game is strictly on rails, giving you hardly any opportunity to go off the beaten track. Any detour that the game throws at you takes no more than a few seconds to traverse, and is only present for the sake of a well-hidden collectible.

The platforming is also scripted ala Uncharted; if it looks like you can jump a gap, you probably can, and you will never miss unless the narrative demands it.

The much-touted Combo Lab feature is rather misleading; you cannot actually create your own combo strings. Rather, the available combos are already pre-determined, and you can only customize the effects of each individual attack in a string (also known as Pressens).

Effective usage of Pressens will allow you to spec your combos to deal maximum damage, regenerate health, or speed up the cooldown of your special abilities. The further a Pressen is placed in a combo, the more effective it will be.

The actual combat has been compared to the Batman games by Rocksteady, but the similarities are superficial at best.

Nilin does not move with anywhere near the speed and fluidity of the Dark Knight. In fact, under normal circumstances, she cannot even string her attacks together between different enemies, which was a bit of a shock to me.

Considering that the game tends to throw quite a number of adversaries at you during a single fight, this is a very strange design choice. Perhaps it was a limitation of the game engine? Either way, I’m sure the combo-maniacs out there would be disappointed – I know I was.

The special abilities, known as S-Pressens, add some much-needed variety to a otherwise bland combat system. For example, you can initiate a DOS Attack on enemies’ memory implants, temporarily stunning them and leaving them wide open to your attacks. You may also forgo subtlety entirely and plant a Logic Bomb in the midst of a group of enemies, which deals heavy damage in a wide area of effect.

Robotic enemies can be instantly taken out of the picture with the Rust In Pieces S-Pressen, which basically causes a single hostile robot to turn on their comrades for a short period of time, after which they self destruct. Basically, there is an ability for every conceivable situation, and effective usage of S-Pressens will make Nilin’s life much, much easier.

God is a DJ

The sequences in which Nilin accesses the memories of her targets and makes subtle changes to their impressions of past events are clearly the best, and most unique part of the game. These sequences, referred to as Memory Remixes, are exactly what they sound like; you are literally messing with someone’s head to change their perception of something that has happened in the past.

Memory Remixes always start off with events playing out the way that the subject remembers, after which the player can rewind the memory and play around with various environmental elements to try to achieve the desired effect.

Something seemingly inconsequential (say, knocking over a bottle) can have a massive impact on the chain of events down the line. Manipulating different objects, or various combinations thereof, can produce wildly different results, ranging from hilarious to downright disturbing.

The developers have even included “bugs” that can be triggered with specific combinations; they clearly spent a lot of effort on making these sequences, so it is no surprise that Memory Remixes are the highlight of the game.

My only complaint would be that you only get to play these Remixes a mere handful of times during the story. Considering that the game relies so heavily upon its mythos about the prevalence of such technology, the developers should have given us more of it. I can think of at least 2 or 3 spots where they could have thrown in additional Memory Remixes, but alas, it is only a pipe dream.

From Paris with Love

So, is Remember Me one of those hidden gems that deserves more attention? Well… yes and no. While the game isn’t exactly spectacular, it is not without it’s merits, especially for a debut effort from a rather obscure development team.

If anything, I hope Dontnod Entertainment has garnered some worthwhile experience from working on this game and applies the lessons learnt to their next project.

The game is certainly worth the time it takes to play through it, considering that it is currently available for the low, low price of nothing on PS3, assuming you are a PS Plus subscriber. If you can find it at bargain price on other platforms, I would also heartily recommend it. Neo-Paris is quite the memorable vacation spot, though you can probably experience all it has to offer during a single visit.

Given more time, Remember Me could have been an amazing game. As it stands, the final product is only slightly above average, held back by a clunky combat system and a lack of exploration in a otherwise magnificent city. The game has little to no replay value due to it’s linearity, but is definitely worth a single playthrough.

Embrace the randomness and overcome the odds!