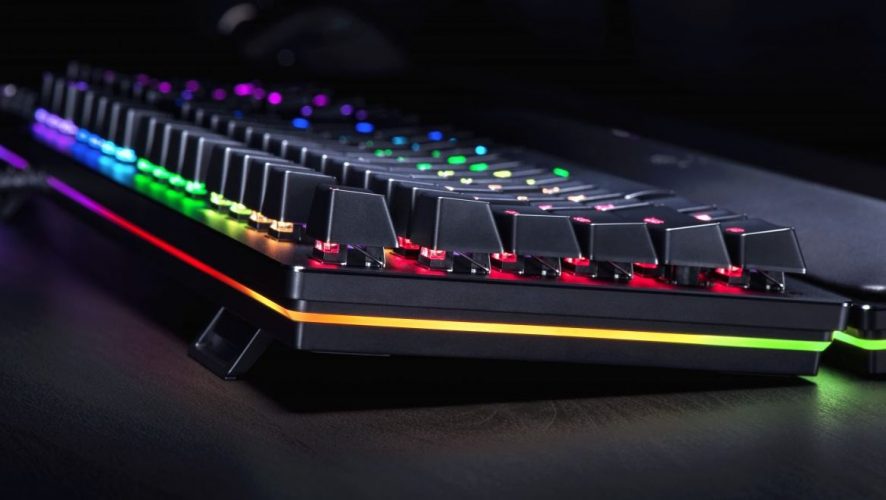 It has been a while since Razer refreshed its mechanical keyboard design, with the latest Blackwidow still looking rather similar to the original that came out way back in 2010.

Now say hello to the Huntsman.

Following the naming conventions of Razer product lines, the new Huntsman takes its name from the arachnid. It is a full-sized mechanical keyboard, complete with dedicated media control keys and Chroma lighting. It has embraced the open concept design as seen on their Blackwidow X, allowing the switches to be seen from its side profile, and giving the user an easier time in removing the keycaps. This design definitely traps less dust and dirt below the keycaps, and cleaning is made much easier.

The only thing odd? Razer has decided not to put any of its triple-headed snake logo anywhere on the keyboard. In fact, the logo can only be seen on the Huntsman Elite, which comes with a PU wrist rest that has the Razer logo etched on top. 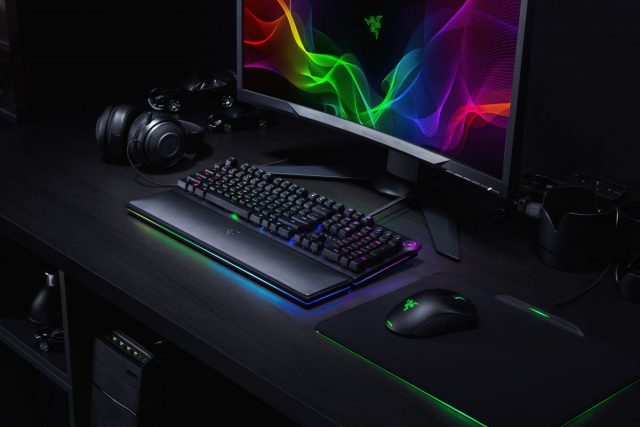 As their new flagship keyboard, the new Huntsman Elite sports the newly-developed purple Opto-Mechanical Switch, which uses a new method of actuation utilising optical light technology. Compared to the traditional mechanical switch, “actuation at the speed of light” is achieved by an infrared light beam passing through the switch stem when pressed, thus sending a corresponding signal to the computer. The switch has been uniquely designed such that the mechanical click and the actual key actuation happens simultaneously – resulting in a key press happening the moment you feel the click, instead of the traditional mechanical switch which clicks first then actuates.

The new switches feel very similar to Cherry MX Reds, which offers an identical actuation force of 45g, but with an audible click and tactile feedback. With the lighter key feel here, it will take some time to get used to, before gamers are able to fully take advantage of the negligible travel distance between the actuation and reset point. For those who are used to typing on heavier key switches, or even membrane keyboards, they would undoubtedly find themselves pressing harder than necessary when starting out on the Huntsman. I was expecting for mis-clicks to come aplenty, but was surprised to know that despite the light actuation force, mis-clicks did not occur. The keyboard also weighs considerably lesser than the older Blackwidows, which leads to the conclusion that Razer has removed the solid metal baseplate from the overall build.

Here are some tech specs regarding the new Opto-Mechanical Switch, in comparison with the Cherry MX Red and Razer Green:

The concern with using a mechanical keyboard is the noise that it produces due to all that clicky goodness, and the new switches changes nothing, as the Huntsman produces a significant amount of noise. Using it in the office served as a distraction to co-workers, more so when it comes to typing than gaming. The key strokes give off a higher pitched noise as compared to Cherry MX Blues and the Razer Greens, which makes it difficult to ignore even after getting used to it. For mechanical keyboard aficionados, it kinda serves like a productivity booster, giving off the illusion that you type faster than you actually do. Razer has also kept the cross-stem design for its switches and key caps, keeping them compatible with custom key caps that enthusiasts might be interested in. 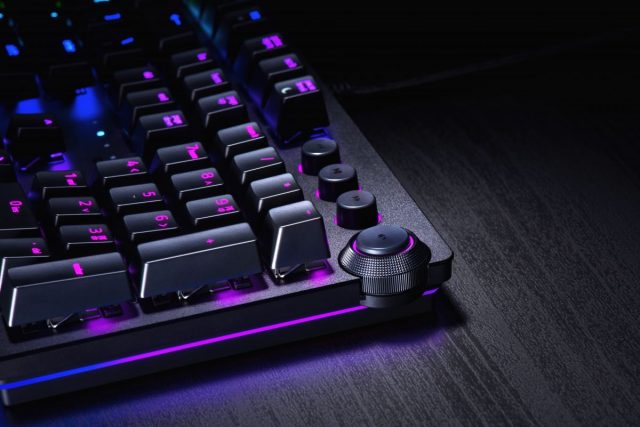 Aside from the detachable wrist rest, the other key difference between the Huntsman and the Huntsman Elite are the dedicated media control buttons, alongside a digital control dial on the top right of the unit. Using Razer Synapse, the volume control dial can be programmed to suit a variety of other functions. The dial comes in handy for adjusting the volume on-the-fly, although the adjustment may occasionally be inconsistent, and not the most precise tool for such a simple task. Razer says that they are working with app developers to integrate the control dial functions into their applications, which opens up a variety of other possible uses for the dial.

As a gaming keyboard, the Huntsman provides for comfortable gaming sessions over prolonged use, due to the lighter key feel and ergonomic wrist rest. Your left pinkie finger will thank you, as the lighter key feel results in lesser fatigue when pressing on that Shift and Ctrl key during gaming.

The synthetic PU material on the detachable wrist rest is soft and comfortable, providing much needed support to your wrist. Using the Huntsman without the wrist rest brings about a certain level of discomfort though, as the keyboard is slightly elevated, and will definitely bring you closer to getting Carpal-Tunnel Syndrome, so it is recommended that both be used together.  However, the keyboard and wrist rest attachment will take up quite a bit of real estate on your desk, so for those with a small desk space might have an issue. 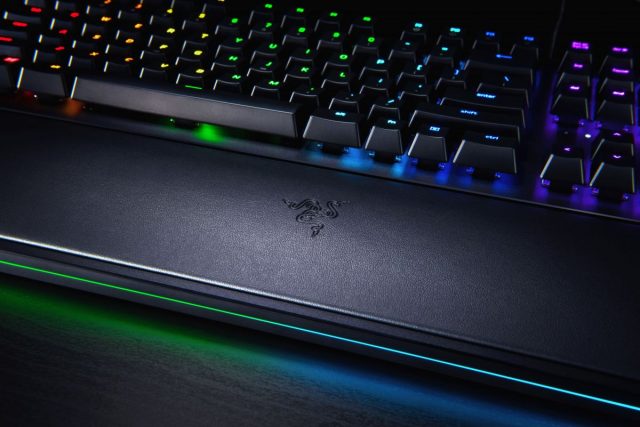 As usual, Chroma RGB lighting is present here, with up to 168 customisable zones on the Huntsman Elite, which includes individual keys, the media control buttons, and an underglow strip all around the keyboard and wrist rest. This is all managed through Chroma Studio in Razer Synapse 3, with all the usual lighting settings available.

The keyboard connects to your PC via 2 USB ports, with one for the keyboard functions and lighting, and the other specifically to power the Chroma lighting on the underglow strip around the keyboard and wrist rest. The biggest gripe about this, is the fact that it takes up two USB ports, and yet there is no option for any USB pass-through, which was seen on the Blackwidow. Users who are using a laptop would definitely face a I/O port shortage without an additional USB hub connected. 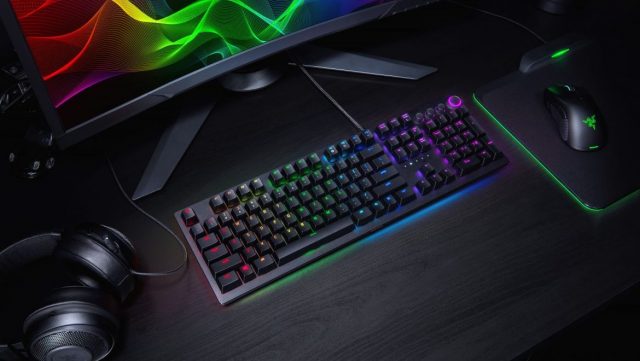 Overall, the keyboard offers a solid build, and it is what you would expect from Razer. The new switches provide a great experience, both during gaming and typing sessions, unless you are not a fan of “clicky” key presses. They are also tested for 100 million keystrokes, so theoretically, they will probably never see the end of their lifespan. The MSRP of S$339.90 is a large amount of cash to splurge on a keyboard, but the Huntsman is built to last, so consider it an investment for the next ten years or so. My Blackwidow Ultimate has been working perfectly since 2010, and I would expect it to continue doing so for another couple of years.

The Huntsman Elite checks most of the boxes you would expect in a high-end mechanical gaming keyboard, with the new switches being a joy to use after getting used to them. The price point however, would definitely intimidate potential buyers.